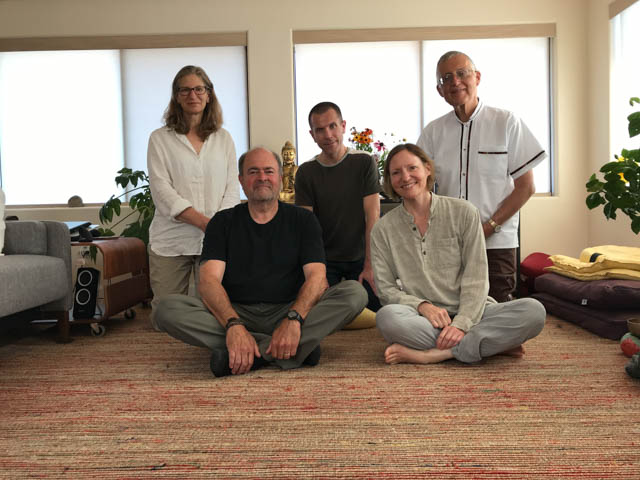 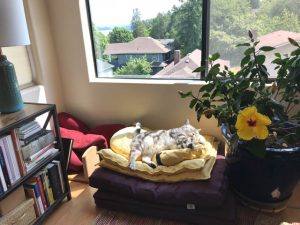 Cat-warmed meditation cushions at Seattle Friends of the Dhamma. The sangha cat, Buho, recently died after being struck by a car.

Both groups practice in the Thai forest tradition of Ajahn Chah, which is known for its monasteries in remote natural areas.

The Seattle group meets monthly on Sundays, at a member’s home in the Leschi neighborhood of Seattle. At those meetings the group shares meditation, an audio or video teaching, silence and a brief discussion.

Group members are now seeking others familiar with the Thai forest tradition, or interested in learning more about it. The group is open to any who have visited a Thai forest monastery of Ajahn Chah or have the intention to, and who have had an informal interview with a member.

In January the group will offer an introductory class on meditation and Buddhism, at the Douglass-Truth Library in Seattle. 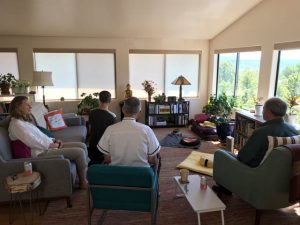 Sunday meditation at Seattle Friends of the Dhamma.

Seattle Friends of the Dhamma members also carpool together to Birken Forest Monastery in the interior of British Columbia.

The nearly seven-hour drive from Seattle to Birken, which includes nine miles of dirt road, can at first seem daunting. But over time it becomes a beautiful journey through mountains, valleys and quaint towns, stripping away city life little by little.

An inspiring reason to take the journey is to meet Ajahn Sona, the founder and abbot (head monk) of Birken Forest Monastery. 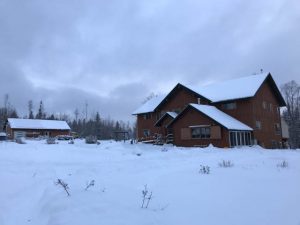 Birken Forest Monastery, in the center of British Columbia, is often blanketed by snow.

Ajahn Sona is well known for his wisdom and ferocity of spirit, as well as for his delightful humor and friendliness. During his afternoon tea time talks, which he gives several times weekly for most of the year, he takes listeners on journeys through time, cultures, philosophies, religions and nature, while offering practical advice on meditation and practice.

Ajahn Sona and Sister Mon, a Thai nun ordained by Ajahn Sona, also offer personal interviews several days a week. The personal connection with these great teachers is a unique and beneficial opportunity. 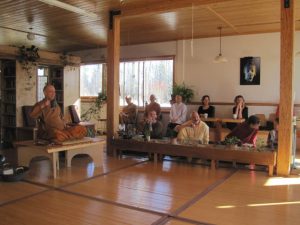 Ajahn Sona at tea time, when he often shares the dhamma with people at the monastery.

Over the last two years Ajahn Sona has also been posting video and audio dhamma talks on his YouTube channel. He creates the videos in collaboration with Ajahn Sudanto, abbot of The Pacific Hermitage in White Salmon, Washington; and with long-term Birken resident Dinka Dantika Pignon, a visual artist. Together this team has created approximately 50 high-quality videos, which are often viewed by the Seattle Friends of the Dhamma.

Two members of Seattle Friends of the Dhamma are upasikas, which is a status given to them because they requested more mentorship from Ajahn Sona, and have made a formal commitment to the monastery. Approximately 12 people are accepted into the upasika program at Birken each year.

This ongoing group has been made possible by the tremendous coordinating efforts of Dilani Sobhana Hipola of Cortes Island, British Columbia, who was previously a resident and office steward at Birken. 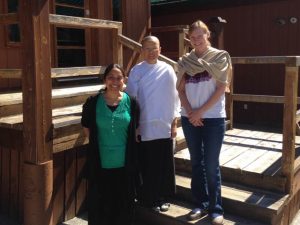 Carson Furry, or Upasika Sujata, founded Seattle Friends of the Dhamma, and has traveled to Birken every few months over the last nine years. Ajahn Sona recently suggested she teach, to provide the dhamma to more people and to create more local connections within the Thai forest tradition.

Furry first was inspired by the monastic traditions in 2008, when she heard a talk by Ajahn Sumedho, Ajahn Chah’s leading Western disciple, which he delivered at Seattle Insight Meditation Society. When she heard Sumedho speak of nature and solitude, she recognized a kindred spirit.

Furry started her Buddhist practice at age 19 inspired by her previously estranged father, who was a meditation/tai chi/qigong teacher, and by her mother, who was an avid naturalist.

Furry initially practiced primarily with Friends of the Western Buddhist Order (Triratna) in New Hampshire and Seattle, then later with Seattle Insight Meditation Society and with Atammayatarama Monastery in Woodinville. She has worked with Ajahn Sona more seriously over the last nine years. 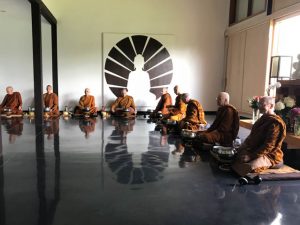 During her first interview with Ajahn Sona she asked about this strong pull toward nature, and she remembers he replied, “You don’t have to go looking for peace. You just practice peace. And when you’re ready it will come to you. It will knock on your door. You don’t have to go to trees. They will come to you when you’re ready and when you step into the woods they will reach for you.”

He then acted out the trees touching him, running his hands around his head and shoulders with a happy and serene look on his face. He also gave her guidance on her daily practice, and she left feeling her path had been brightened and skillfully directed.

If you would like more information about Seattle Friends of the Dhamma, the January intro class or carpooling to Birken, email seattledhamma@gmail.com.