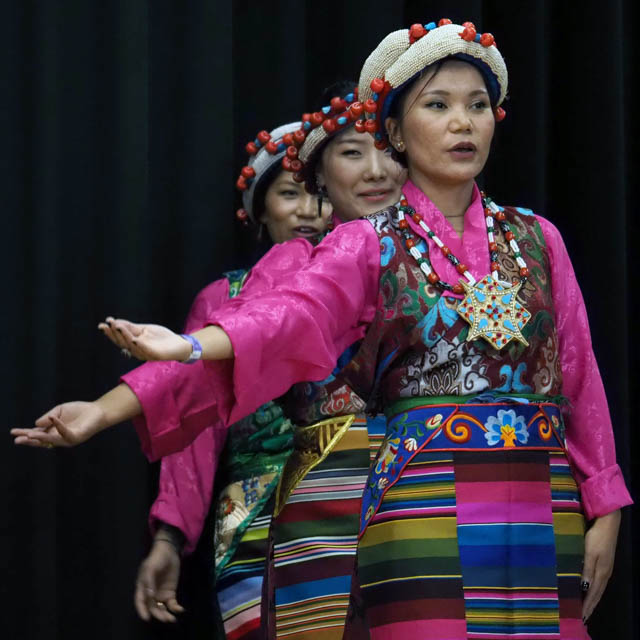 The Tibetan Association of Washington, which represents Washington state’s Tibetan community, put together the three-day picnic event. The event, at North Creek High School in Bothell, a small city north of Seattle, included Tibetan cultural performances and sports competitions. The sports events included soccer and basketball tournaments for adults and for children. Other events included a discussion on the future of the Tibetan community in exile, traditional dances, and networking. 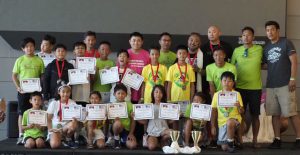 Tibetan children from Portland and Seattle with their medals and recognition certificates for their participation in basketball and soccer.

Putting together this event was a major undertaking for the small Tibetan Association, requiring much help from its members.

The picnic began with a morning celebration of the Dalai Lama’s birthday on Friday, July 6, the day of his actual birthday. Monks from Seattle’s Sakya Monastery led the morning prayers, as community members prostrated and offered khatas (white silk scarfs) to a makeshift throne that held a portrait of the Dalai Lama. Well-wishers paused a few moments before offering their khatas to the throne, eyes closed, clasping their hands together with bowed heads, as they said a quick prayer for the Dalai Lama’s good health. 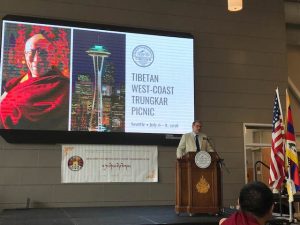 Rep. Strom Peterson, from the 21st Legislative District of the Washington State House of Representatives, addressing the crowd.

It was quite a sight. The huge main lunch hall at North Creek High School, a new and impressive building usually filled with the energy and cacophony of high school students, was transformed into a chanting hall with an energy of a different kind.

An image of a smiling Dalai Lama looked down from a giant electronic screen on the wall. Rows of Tibetans wearing their traditional chubas (dresses) lined up to offer their khatas, chanting in unison. Between prayers people sipped hot Tibetan butter tea and ate sweetened rice and Tibetan cookies.

Washington State Representative Strom Peterson from the 21st Legislative District was invited as chief guest, and he gave a speech about the importance of diversity in our society.

Earlier in the year the representative was part of a local group that went to Dharamsala, India, home of the Tibetan government in exile, and met with the Dalai Lama. At the picnic  Peterson gave a brief update on that visit and spoke about his experience. The crowd responded with much approval and loud applause when he said, “I will do everything I can to help build a local Tibetan community center.” 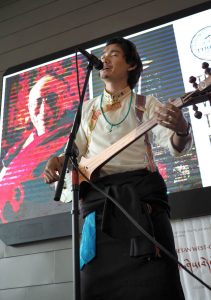 Undaunted by the organization’s financial realities and the high cost of real estate in the region, Dorjee is determined to get the center built.

“For years we’ve had this vision and every successive board has planned and talked about it. It is time we take concrete steps and move forward.” he said. “I’ve reached out to and met with many organization leaders, other Tibetan Associations, asked my team to research various grant opportunities and am looking to Olympia (state funds) as well. Internally we’ve launched a membership and fundraising drive and who knows, we might just luck out on a generous donor.”

The number of Tibetans who gathered for the picnic is proof the Tibetan population is growing, and that there is indeed a need for a community center in the region. Many of the cultural performers were Tibetan children from the local Tibetan Sunday School, where they’ve learned and practiced the songs and dances taught by a core group of volunteer parents and community elders. The Sunday school rents out a couple of rooms at the Shoreline Senior Center for their weekly classes. 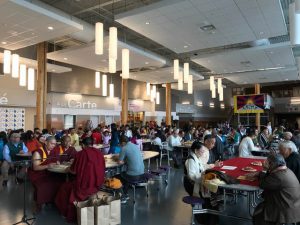 In his speech Tsering thanked Rep. Peterson for his support. He said he remembered briefly meeting Peterson in Dharamsala, and added he was glad to meet him again and catch up. This being his first visit to Seattle, Representative Tsering also took the opportunity to meet with various local dharma centers, and to tour Sakya Monastery.

The picnic is a big draw for people, especially youth. The picnic provides an opportunity for Tibetans to meet, play, socialize and network with others from other regions. Families that have dispersed to different cities reconnect at the picnics, which provide rare opportunities to build camaraderie with food and dance. 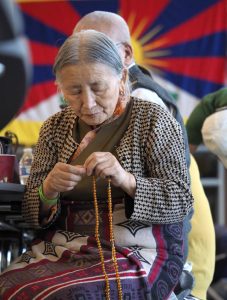 A Tibetan guest at the gathering, chants the beads on her mala.

A three-day picnic might seem a tad bit long, but most Tibetans traditionally celebrate month-long picnic festivals in the summer in Tibet. If three days sounds long, a month-long of anything besides work sounds a bit over-indulgent to many of us in the West, but these are different customs, traditions and lifestyles.

This three-day birthday event works partly because the Dalai Lama’s birthday falls close to the long July 4 weekend. It’s ironic the celebration of U.S. independence supports Tibetans in their own celebration.

Despite concerns about his health, the Dalai Lama celebrated his own birthday in Ladakh by offering 19 days of teaching.

While there he remarked on how over the past 50 years he had noticed great economic development in the region, as well as better-quality study in the monasteries there. He spoke of plans he has developed with regional leaders, to transform all the monasteries in the area into serious centers of learning.

12
SHARES
Share
Posted Under: 2018, Dharma Education, Fall, Featured On Home Page
About the Author: Jamyang Dorjee
Jamyang Dorjee is a Tibetan Buddhist living in Bothell, Washington, with his wife and two children. He is a board member and former president of the Tibetan Association of Washington. He writes regularly for Northwest Dharma News.