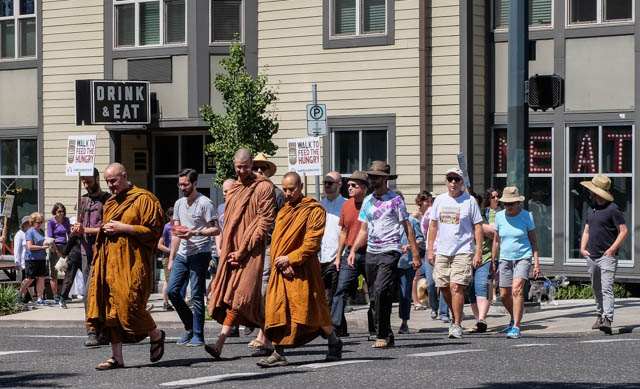 Monks from the Pacific Hermitage led the walkers on the 2-mile route along Hawthorne Avenue in southeast Portland.
Photos by: K. Kendall

The weather was beautiful for Portland’s second Walk to Feed the Hungry. 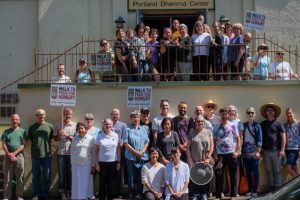 The group poses for a photo at Portland Friends of the Dhamma at the beginning of the walk.

On Aug. 18 about 35 people walked the 2-mile route, led by Ajahn Sudanto, Ajahn Kassapo and Tan Suddhiko, the current residents of Pacific Hermitage. This is a Theravada monastery in White Salmon, Washington, north of Portland.

The walk was one of a series of similar events around the world initiated by Buddhist Global Relief. These included a Seattle walk scheduled for Sept. 15, past the production deadline for the fall issue of this publication. 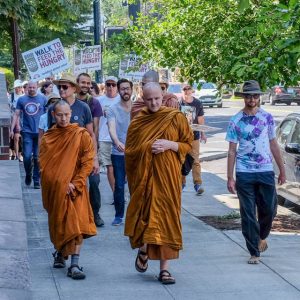 This year’s Portland walk was very successful, with 125 donors contributing more than $9,000 to support the food donation work of Buddhist Global Relief and the Oregon Food Bank. This was well beyond the goal of $8,000.

Donors also gave almost 200 pounds of non-perishable food to the food bank, enough to provide 150 meals for local people. Many others offered their time and heartful support.

The walk began and ended at Portland Friends of the Dhamma, a southeast Portland Theravada Buddhist center.

Before the walk began the crowd celebrated the 50th birthday of Ajahn Sudanto, abbot of Pacific Hermitage, with cake, ice cream, and a candle-lit ceremony of sharing good will. 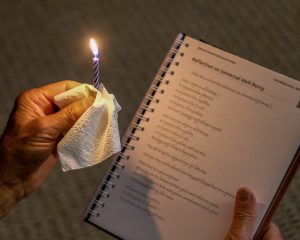 The walkers celebrated the 50th birthday of Ajahn Sudanto, abbot of the Pacific Hermitage, with cake, ice cream, and a candle-lit ceremony that included Theravada chanting.

Before starting the walkers were inspired by a series of remarks by Ajahn Sudanto;  by Sakula , spiritual director of Portland Friends of the Dhamma; and by Matthew Grad, one the of the organizers of the walk.

After the walk was done the walkers returned to snacks and drinks, generously provided by the volunteers.

Walk organizers Grad and Christopher Konczyk are deeply grateful, to everyone who showed support by donating, fundraising, spreading the word, volunteering, walking or simply sending out good wishes.

10
SHARES
Share
Posted Under: 2018, Compassionate Action, Fall
About the Author: Ruby Grad
Ruby Grad lives in Portland, practicing in the Theravada tradition with Portland Friends of the Dhamma and the Pacific Hermitage. She is the volunteer Buddhist chaplain for the Multnomah County Jail, and has led meditation and study groups for prisoners, women, and senior citizens. Grad has been practicing since 1988, and is a graduate of the Dedicated Practitioners and the Community Dharma Leaders programs offered by Spirit Rock Meditation Center in Woodacre, California. Before moving to Portland she worked as a retreat manager and program coordinator at Spirit Rock.