The south side of the building, already an enticing place to take a break and meditate on the changing nature of all things.
Photos by: James Davis, Andrew Shaw.

In Port Townsend, Washington, on top of a hill overlooking Fort Worden State Park, quiet things are happening. The focus of this non-activity is an aging structure called Building 409.

The Port Townsend Meditation Center was formed in the summer of 2017 by four friends – practicing meditators from different Buddhist traditions – whose ambition is to convert Building 409 into a place that will welcome individuals and groups from all traditions to deepen their meditative practices.

We believe that a town’s civic buildings, in addition to a library, a post office, and a courthouse, should include a place where people can gather to reflect in silence, and do so in the company of others. This should be a place where they can experience the support of communal practice, while developing their own inner peace.

Currently dilapidated, Building 409 it is one of 23 buildings constructed in 1902 and 1903 for one of the three “Triangle of Fire” artillery bases that protected Puget Sound. Building 409 was a drying barn for the ropes that tethered canons to their placements. At the end of World War II it was used a recreation hall for the men stationed at the fort.

The troops left in 1953, after Fort Worden was closed as a military installation. Seven years later the site was acquired by Washington State Parks. 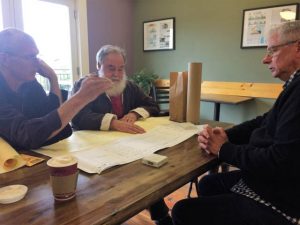 Three of the founders of the Port Townsend Meditation Center look at some preliminary layout plans. From Left to right: Isaac Gardiner, Bill Porter, and Walter Parsons.

Among the tenants that have since renovated and moved into former fort structures are Copper Canyon Press, The Port Townsend Woodworking School, and Madrona MindBody Institute. Because of the quality of materials and artistry that went into Building 409 a century ago, a sturdy frame is waiting to be repurposed into a meditation center.

Once the outside of the building is restored and the inside outfitted for its new use, it will have two meditation halls: one for up to a dozen people, and a larger hall for three to four dozen people. The facility will include a small kitchen for preparing tea or other beverages, and four toilets.

Both halls will feature an Asian-style meditation platform circling the interior where people can sit on cushions cross-legged or with their feet on the floor. The larger of the two halls will also include floor space for meditation and walking meditation.

As the building is adjacent to a large meadow, there will also be opportunities for outside walking meditation. Although both halls will generally be open to the public from dawn to dusk, the smaller of the halls will be set aside for local groups, while the larger of the halls will be for group retreats. People in any meditative tradition will be able to use either hall, and will be able to invite teachers of any tradition.

The numerous lodging options at Fort Worden include groups renting the Retreat House, which offers 12 rooms, each with twin beds. The Retreat House is just a 10-minute walk to Building 409 by a trail.

Currently our small group is in the early stages of fund-raising and community outreach, but momentum is growing. We began our research into the building over a year ago with the help of Gee Hecksher, a retired historical architect and a board member of the group that oversees many of the buildings at Fort Worden. 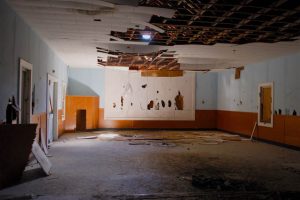 The present state of the interior of the building. It was last used as a clandestine theater for one performance by local youths.

Hecksher advised us to contact Kevin Alexander, curator of the fort’s artillery museum, whose volunteers care for the former battlements and Building 409.  Alexander let us look inside the building, and helped us remove the plywood cover from one of the windows.

Standing on a ladder we crawled into the abandoned structure, which had been closed for more than 50 years and had become home to bats, rats and hornets. The only light came through a high window, just enough to see the potential.

From that moment on we started contacting the people who would have a say in what we wanted to accomplish: Alex McMurrey, who heads the historical preservation department of Washington State Parks, Larry Sammons, who is the maintenance boss for the Public Development Authority that operates the fort, and Brian Hageman, the district ranger who oversees the fort.

We met with nothing but positive responses. This was followed by more talks with Hecksher about architectural plans and requirements, and about the various organizations that might become involved.

We made contacts with an asbestos inspector, a plumber and electricians, and entered the building repeatedly to take measurements and assess conditions. We were finally given permission to open one of the doors and install a hasp and padlock, so the need to crawl through a window has ended.

People we didn’t know, and some we already did, began finding out what was happening and offering to help. We formed a non-profit and a board of directors and asked Tom Jay, a local artist known for his work with bronze, to cast a bell for us. We also made contact with GreenForge Labs, an organization that mentors contractors through the Port Townsend School of Woodworking. 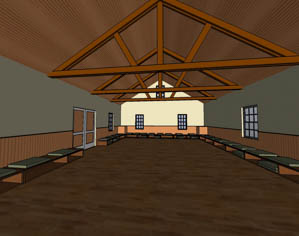 An artist’s conception of the interior of the finished facility, with meditation benches around the walls.

Meanwhile we hired Richard Berg of Terrapin Associates to draw up the plans needed to apply to Washington State Parks to lease the building, to solicit bids, and to begin fund-raising. The design will adhere to State Parks’ requirement that the historical appearance of the building exterior be preserved.

The fact that the building’s electrical, water, and sewage lines haven’t been used for 50 years means all have to be restored. We have to outfit the interior with a heating system and bathrooms, in addition to the meditation benches, cushions and other paraphernalia needed to accommodate different meditation traditions.

We’ve also contacted half a dozen local meditation groups already meeting regularly in various venues, to see what their needs might be, and what interests they might have that Building 409 might satisfy. We are committed to making this a place that will support anyone who wants to meditate, no matter their style, protocol or tradition.

A number of generous benefactors have already donated to our slowly expanding bank account. In 12 short months we have made great progress developing a design for the Building 409 that is sympathetic to its surroundings, and that includes views of Puget Sound from the bluff on which the building stands. Thus far, everyone we’ve turned to for support and encouragement has responded with nothing but “What can we do to help.”

According to Bill Porter, one of the center’s founders, “There is nothing wrong with meditating in a garage or a living room, alone or with fellow practitioners, but nothing beats having a place for a larger community of people to sit together. In the case of Zen, it never amounted to a hill of beans in India or in China until it became a communal practice. I’m thinking if we do this right, we might have to tie the building down.”

As we move into further development, backers of the Port Townsend Meditation Center will be researching community needs and developing fund-raising and outreach campaigns. We are currently moving on three fronts: project design, identifying major donors, and investigating also offering programing in nearby locations.

We hope to accomplish enough to begin construction during the spring of 2019. It is too early to put a firm target on our fundraising campaign, but we will likely have to raise more than $1 million.

To receive progress updates or to donate to the Port Townsend Meditation Center, please visit the website, or contact us at porttownsendmeditationcenter@gmail.com.

0
SHARES
Share
Posted Under: 2018, Dharma Healing, Arts, Fall
About the Author: Bill Porter
Bill Porter in the early 1970s lived in a Taiwanese Buddhist for three years. In 1993 he returned to the United States, and he has lived ever since in Port Townsend, Washington, where he has supported himself as an independent scholar. Over the past 35 years he has published 20 books containing his translations of Buddhist texts and Chinese poetry as well as accounts of his travels in China. In addition to two NEA translation fellowships, a PEN translation award, the inaugural Asian Literature Award of the American Literary Translators Association, he has also been honored with a Guggenheim Fellowship, which he received to support work on “Finding Them Gone,” an account of a pilgrimage to the graves and homes of China’s greatest poets of the past.