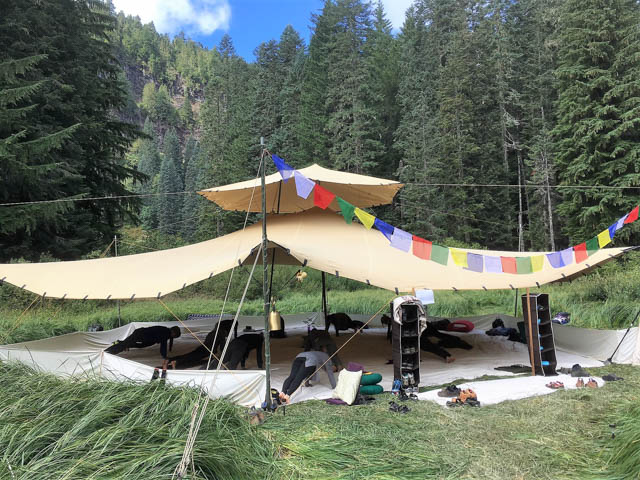 A unique offering of Eugene Insight Meditation Center is its wilderness retreats, this one at 5,000 feet in an alpine meadow.
Photos by: Michael Daly, Paul Deering, Justin Michelson, Linda Rose.

“There’s an Insight Sangha in Eugene?” The conversation took place over email on a cloudy 2015 day in Oregon’s Southern Willamette Valley, but it wasn’t the first time these words had been uttered.

Justin Michelson, who had moved to the area five years prior, had just began his training in the Community Dharma Leader (CDL) training program at Spirit Rock Meditation Center in California, and this exchange renewed his effort to find or create sangha.

“Oh, you know, my friend started one a while ago,” a cohort in the CDL program had replied to one of his queries. “Here’s her contact info.” 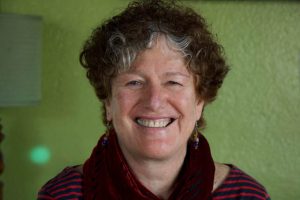 The college town of Eugene has certainly been home for insight meditators, but over the last few decades practitioners have seemingly remained in clandestine pockets.

They practiced the dharma on their own or in small groups, in people’s homes or small studios.  A group might form and then dissolve years later, and Google would never know.  While Tibetan and Zen Buddhism had long developed healthy roots in Eugene, Theravada practice had just recently begun to bloom…

“What’s the first thing we should do?”

“Well, let’s make a website. Oh, and a Facebook page, too!” These were typical responses from an enthusiastic millennial.

On another cloudy spring day only a few months later, the subject of starting a Theravada group came up in a meeting with Michelson and meditators Rasika Link, Linda Rose, and Marilyn Picariello. 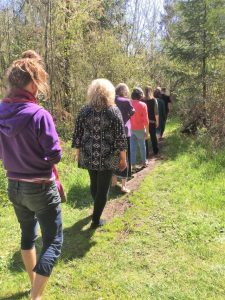 Link, a long-time yoga teacher and dharma practitioner, was a student of Spirit Rock’s Dedicated Practitioner Program (DPP), and had started a small Eugene group at her yoga studio with some other peers from the Bay Area.  Rose and Picariello had recently returned to Eugene from the Bay Area, where they were students of Mission Dharma’s Howard Cohn and members of that sangha’s planning committee.  They now joined with Link and later Michelson, to sow the seeds of a new sangha.

Three years later, Eugene Insight Meditation Center has a name, non-profit status, a website, a Facebook page with close to 500 likes, and a weekly newsletter with almost 300 subscribers.

“People really seem to want this.  We get new people every week now,” said Michelson, now a graduate of the community dharma leader program, and co-leader with Rose of the burgeoning sangha.  “We’ve outgrown our space, and we’re moving to a bigger one next month.  We’re even buying our own cushions, chairs and altar supplies, with the dana (donations) we’ve saved.”

Each week practitioners pack into a small yoga studio, just feet from the bustle of Eugene’s Willamette Street, to engage in small-group discussion, guided meditation, and a dharma talk.

“I love the guided meditations. I have trouble focusing at home for sits, so it’s nice to do it in a group,” said an anonymous sanga member. “I also feel welcomed and accepted, even though I’ve cried just about every time I go…doesn’t seem to scare people away.”

The hustle and bustle just outside the front door is a testament to the practice, and how we can bring it right to the center of our chaotic lives. 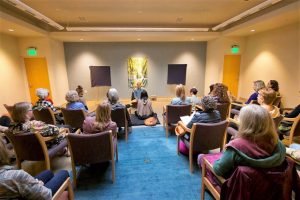 Michelson teaching “The Essence of Insight,” a six-week introductory series, at the Unitarian church in Eugene.

“It’s just like being back in the Mission – well, kind of, in a small way,” said co-organizer Picariello, referring to the Bay Area.

However, Eugene Insight’s small urban dharma center isn’t bound by its weekly meetups, or even by the confines of the city itself.  The sangha offers a bi-annual introductory meditation series, monthly “Tea and Talks,” a dharma book group, a “Q-Sangha” for the LGTBQIA community, daylong retreats at a local retreat center, and now even meditation retreats out in wild nature.

The intro course, dubbed “The Essence of Insight”, is a six-week series crafted by Michelson.  In the past year more than 70 people have gone through the program, deepening their practice and growing the insight community.

The “Q-Sangha”, led by Rose, Picariello, and Carol Jones, is meeting monthly as a safe home for the LGTBQIA.  But growing a sangha takes work, and the leaders are still hoping more sangha members will step up to volunteer. 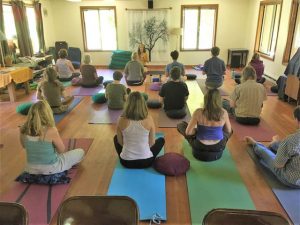 “Diversity is really important to us, and we’re making progress,” Michelson said. “All of our programs have scholarships or work-trade options, or are offered on dana. (Which means no fees are charged and people donate what seems right.)

“Mainly right now we’re diversifying in relation to age, income/education levels, gender identity, and sexual orientation,” Michelson said. “But we’re looking to include more ethnic and racial diversity, which can be challenging since the Eugene area is 85 percent white. We’ll make it happen.”

Perhaps the most unique venture of the sangha is the wilderness meditation retreats, Michelson’s heartchild. Here practitioners literally take to the woods, perhaps re-enacting a centuries-old Buddhist tradition of going to the forest to meditate. In July the group did a day-long retreat in a wildflower meadow at 5,000 feet of elevation. In August they did a three-day silent retreat at an alpine lake at 3,000 feet. Both were in the wilds of the Willamette National Forest.

“Nature is my first teacher; always will be,” Michelson said. “Meditation in nature need have nothing to do with “retreating”.  The wilderness is just a pure reflection of our own untamed human experience. 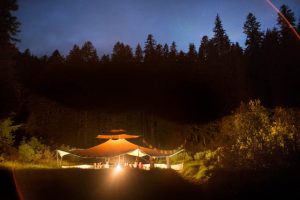 The Nature’s Heart wilderness meditation hall, 46 feet across, during a nighttime meditation.

“Sitting within the energy of the wild, we are offered an opportunity to finally embrace the uncontrollable and ever-changing process of creation that lives and breathes within our own skin.  It is this loving surrender to the vicissitudes of life itself that opens the door to the infinite; and it’s this we can bring back home with us.”

Michelson comes from a lineage of nature-based Dharma practitioners. Seattle vipassana teacher Rodney Smith, who asked Michelson to teach, studied with Thai Forest Master Ajahn Buddhadasa, who was renowned for his faith in the dharma of nature as well as his scholarship and penetrating wisdom.

In one of his dharma talks Buddhadasa said, “Dhamma is the ecology of the mind. This is how nature has arranged things, and it has always been like this, in a most natural way. The mind with dhamma is fresh, beautiful, quiet and joyful.”

From the wilds of the mountains, to the wilds of Willamette Street in Eugene, insight meditation appears to be alive and well in the Southern Willamette Valley.  Only time will tell what the future will bring for the Eugene Insight Meditation Center, but it certainly looks bright.

Stay connected through their website or their their Facebook page, consider signing up for their newsletter or even one of their wild retreats, and keep the dharma in bloom in the Northwest.

0
SHARES
Share
Posted Under: 2018, Fall, Sangha News
About the Author: Justin Michelson and Linda Rose
Justin Michelson began practicing insight meditation in 2000 in Seattle, under the guidance of Rodney Smith.  Several years ago he was asked by his teacher to begin sharing the dharma, and subsequently completed the Community Dharma Leaders program at Spirit Rock Meditation Center in California. His teachings weave together the dharma with love for the natural world.
Linda Rose began practicing insight meditation in the late 1970s.  In 2000 she began classes and residential retreats at Spirit Rock, and soon thereafter became an active member of the Mission Dharma center in San Francisco, guided by Howard Cohn.  Rose is a licensed clinical social worker/psychotherapist, and also a dancer and dance-movement therapist. She lives in Eugene, and her focus is on sharing the dharma.