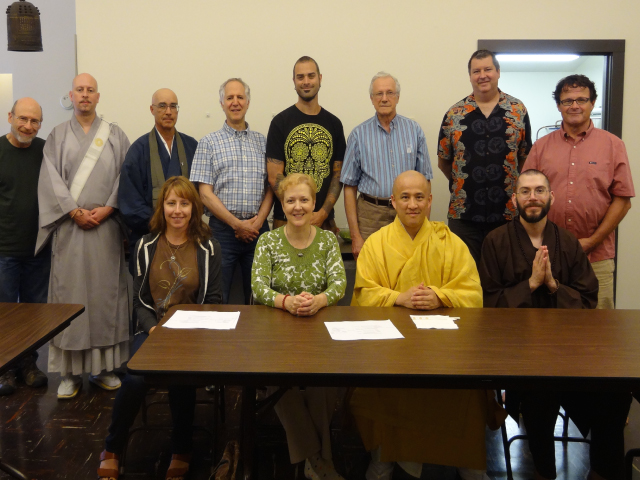 Teachers and the Northwest Dharma Association board gathered at Seattle Koyasan Temple.
Photos by: Megumi Rafferty and Joseph Romero.

The mission of Northwest Dharma Association (NWDA) is to support Buddhist teaching, practice, and community in the Pacific Northwest. Over the last year or so, we have rallied around the term Mahasangha, the larger community of Buddhist communities. We want to be instrumental in building Mahasangha. What does this mean and how do we do it? 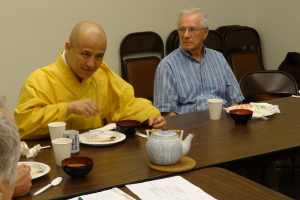 Taijo Sensei, abbot of Seattle Koyasan, and Joseph Romero, who sits on the board of Atammayatarama Buddhist Monastery in Woodinville, Washington.

Mahasangha means seeing through the apparent boundaries between Theravada, Zen, Tibetan, Pure Land, and other traditions, to the compassionate awareness at the heart of Buddhism. Each tradition has its skillful means and each can learn from the others.

We can intellectualize all we want about how great Mahasangha could be, but if we don’t interact with each other and forge relationships, then “mahasangha” is just an intellectual exercise.

Recently the association has been hosting conversations to nurture this larger community. At a recent meeting of former and current board members at former Board President George Draffan’s house in Seattle, the consensus was that NWDA doesn’t need a big infrastructure and board of directors. Instead, most volunteers would rather be involved directly in community dharma events.

Another conversation, hosted by Taijo Sensei at Seattle Koyasan Temple, was attended by the board of Northwest Dharma Association and several teachers. A mahasangha event in itself, conversation centered around formation of small regional dharma networks to promote connection and dialog among local sanghas.

Another theme was that we, as Buddhists, should be performing ‘secular’ good works in our society along with our dharma practices. As Taijo Sensei said, “Act like Bodhisattvas!”

Key themes emerged from these initial conversations:
– Starting small and local is great.
– Any gathering of three or more different traditions is a Mahasangha event.
– We should perform ‘good works’ together, out in the general community. 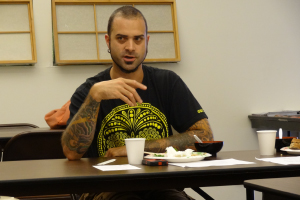 The last couple of public events sponsored by NWDA are examples of mahasangha events, albeit also larger-scale events.

What is a Mahasangha event? It is when three or more Member Groups agree to hold an event together that crosses lineages. So, for example, a sangha in the Tibetan tradition joins with a Pure Land temple, and a Zen community, to sponsor a discussion on ethical practice.

The traditions can vary, the themes can vary, but essentially the idea is that NWDA will be a clearing house to facilitate and promote these gatherings. 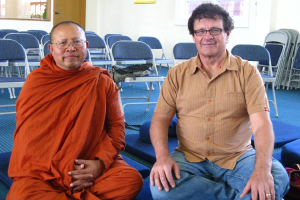 Funding the activities of Northwest Dharma Association is a shared responsibility. While we have downsized our operations budget over the past few years, there is much work to do in nurturing the regional networks.

Along with our new direction is a new funding approach called the Mahasangha Mala, in which we encourage individuals to support NWDA through recurring monthly donations of $9 or more. Of course one-time donations, large or small, are always welcome!

Our Fall Fund Drive will start on Oct. 4, the date of our annual Teachers Meetings in Portland and Seattle. Our goal is 30 new Mahasangha Mala members during the pledge drive.

0
SHARES
Share
Posted Under: 2014, Fall, NWDA News
About the Author: Tim Tapping
Tim Tapping practices with Sakya Monastery of Tibetan Buddhism in Seattle, and is president of Northwest Dharma Association. He works as a software engineer at Expedia travel in Bellevue, Washington, and leads a meditation group there. He lives in Sammamish, Washington, with his wife and daughter. His son is a chef in Long Beach, Washington.