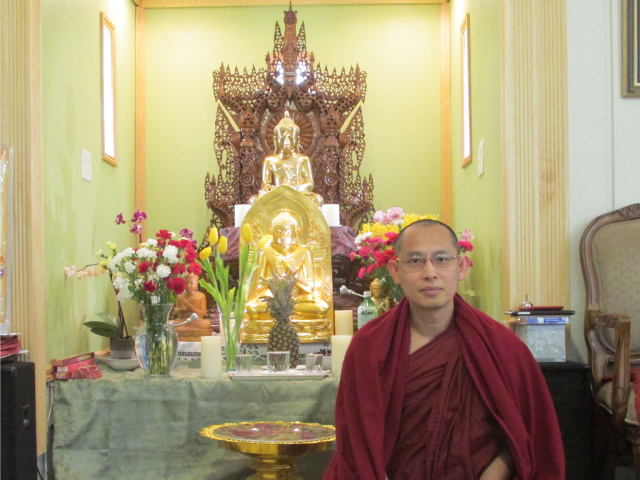 With a new and highly educated abbot from Myanmar (Burma), the monastery Dhamma Gone Yee Snohomish is moving into a new era of growth.

The Snohomish County monastery, one of just two Burmese monasteries in Western Washington, is modest now. Ven. Pannobhasa lives alone and teaches the dhamma in a small blue house, its living room converted into the shrine room. 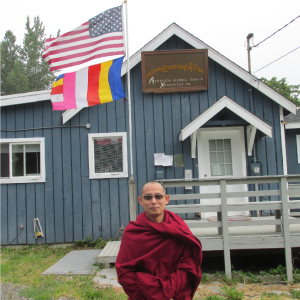 The small blue Snohomish County building, once a home, is now a Burmese monastery.

The house is just off the county road south of Snohomish, on a five-acre plot that’s a combination of forest and wetlands.

The setting is rustic and very Northwest. But for Pannobhasa, a slightly-built man with an open smile, it’s all about possibilities.

“People would like to learn the dhamma, I need to help them,” he said.

As an expert in Abhidhamma, the traditional Buddhist studies of the workings of the mind, Pannobhasa is offering a beginners’ class in Abhidhamma studies and is setting up a class in Abhidhamma for children. Also envisioned is an “applied Abhidhamma” class that will teach how to make the material of practical value in daily life.

The Abhidhamma is a detailed description of the inner workings of mind and consciousness, which can be thought of as providing an “exploded view” of the mind. The complexity of the Abhidhamma is beautiful; it is an imposing work and intellectually demanding when studied thoroughly. 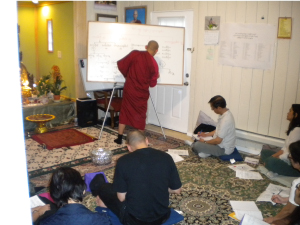 Ven. Pannobhasa teaching the dhamma in the shrine room.

The new building is to include a large meditation hall, classrooms, a lecture room, and even accommodations for those participating in multiple-day retreats. This will be a large project, but members are confident that under Ven. Pannobhasa’s leadership this vision will be realized.

The five-acre site, with a variety of small ecosystems, has much potential. A brook flows gently through the grounds, emptying into a small pond next to a wetland area. There is a meditative wooded area, which will someday have small cabins for quiet meditation.

The current monastery building is rather small but functions well. A nice feature is the large parking area for visitors. 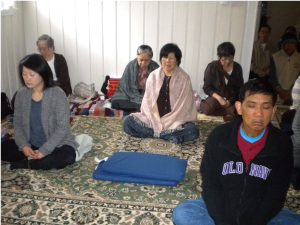 People mediating in the shrine room.

Even before Ven. Pannobhasa’s arrival this spring, the lay community supporting the monastery was growing gradually. Generally about 20 people come to community events, and the monastery is supported by 150 Burmese families, he said.

The monastery was founded just five years ago, and Ven. Pannobhasa recognizes that the expansion plans seem ambitious compared to the current resources.

“We have a lot of things to be done, and we have financial problems,” he said, with a smile. “We try our best.”

Pannobhasa, 47, was born in the Irrawaddy Delta area of southern Myanmar. First trained as an engineer, he decided to become a monk at 24.

“Buddhism is very synchronized with science,” he said.

Pannobhasa was ordained at the renowned Vijjotarama Monastery in Yangon, formerly Rangoon, the largest city in Myanmar. There he studied the dhamma for 10 years. 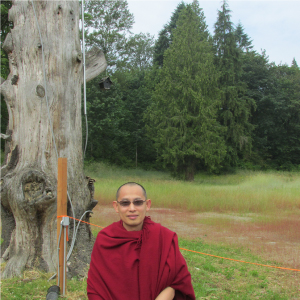 The five-acre site has much space for expansion.

Later he studied and taught for several years at the Tisarana Vihara in London, where he also developed his fluent English.

Now, as well as teaching dhamma, Ven. Pannobhasa participates in the planning and daily functioning of the monastery. He provides a focal point and guidance for the lay members, and helps with monastery upkeep and maintenance.

Dhamma Gone Yee Snohomish monastery had a slow start, but now under the skillful direction and guidance of Ven. Pannobhasa, and the efforts of members, the monastery in time will evolve itself into a vibrant center of Theravada Buddhism.

There are some difficulties to resolve before the members can fully realize their vision.

Most challenging is getting rid of a large and errant pile of dirt.

When Theravada Buddha Sasana Organization first acquired its property, several members wanted to do some improvements to the lot and to the house. They decided to add an additional room to the house, as well as some landscaping.

Unfortunately, they started the work without sufficient investigation into what sort of permits were required. The work did indeed require permits, a construction permit for the additional room, and a land disturbance permit for the landscaping. However no permits were obtained. 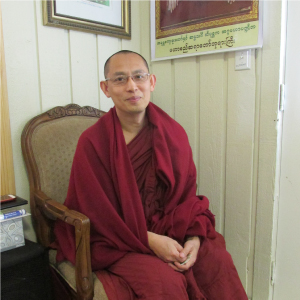 At 47, Ven. Pannobhasa has a lifetime of practice to share.

In addition, when a trucking company was contracted to bring in some fill dirt, that company brought too much, and placed some of it on the wetland.

Snohomish County issued two violations against the organization, one for the construction, and the other for placing dirt on the wetland. While the construction violation was lifted by simply disassembling the added room, the wetland encroachment violation is requiring substantially more effort to reverse. To resolve the violation, most if not all the dirt has to be removed.

Theravada Buddha Sasana is essentially just beginning; it is a young monastery with great growth potential. The most pressing challenge is facing now is the wetland violation issue.

For all the dharma friends the monastery extends its most genuine appreciation for any help you can provide. We would even welcome any ideas on how to inexpensively remove the dirt. Donations, as always, are very much appreciated. For more information please contact Dave or Kyu Z at 425.441.4046.

0
SHARES
Share
Posted Under: 2014, Fall, Sangha News
About the Author: David Zabloudil
David Zabloudil is Buddhist practitioner in Theravada tradition, and a leader of Theravada Buddha Sasana Organization. His wife, Kyu Zabloudil, is also a temple leader and is Burmese.