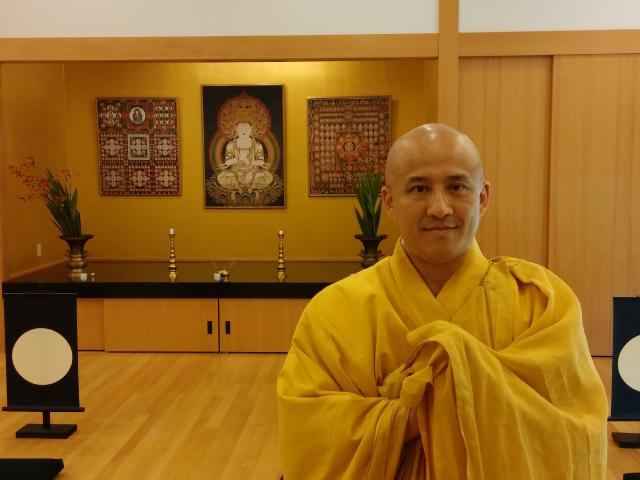 Taijo Imanaka in the recently-opened dojo. In front of each sitting cushion is the moon symbol unique to this tradition.
Photos by: Taijo Imanaka, Tommy Johnsen, Steve Wilhelm.

After decades of aspiration, Seattle Koyasan Buddhist Temple has opened its first meditation dojo, and is rapidly expanding its activities. 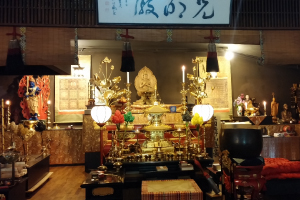 The dojo, a meditation hall with a bright and simple design and lots of polished wood, is intended for silent meditation practice. It features an image of Mahavairocana, our lineage’s central deity, who we consider equal to the universe.

The new dojo is right next door to the temple’s much-older and more ornate vajrayana practice hall.

With the new dojo open, now we are offering “Moon Meditation” classes four times a week. 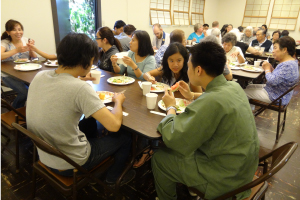 The Osettai Potluck after the Obon (Welcoming Ancestors) service on July 13, 2014.

A feature of that practice, unique to our tradition, is an image of the moon directly in front of each practitioner, representing Buddha nature.

The January opening ceremony for the new dojo was a great joy for us.

In fact, “joy of meditation for everybody” is the reason for our existence. It is our wish that a circulation of a good energy arises between the dojo, which is about a mile east of downtown Seattle, and the larger community of the downtown Seattle area. 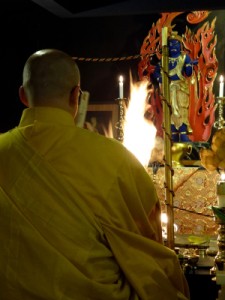 There are many dojos in the world: karate dojo, aiki dojo, jujitsu dojo. But originally a dojo means the place where the Buddha was enlightened under the Bodhi tree 2,500 years ago, or more broadly, where you practice Buddhist meditations.

Although Shingon Buddhism, a Japanese Vajrayana school, is quite meditation-oriented, we haven’t had a dojo since the temple’s foundation in 1953.

It has long been in our long prayers.

The construction started in April, 2013, and finally we had the opening ceremony in January 2014.

Here’s a brief synopsis of the meditation we can do in our new dojo: 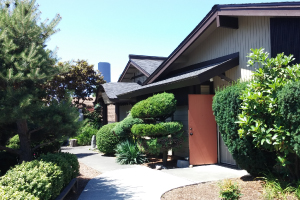 Before the meditation, a scroll of the full moon is prepared for each participant, symbolizing each person’s Buddha nature. During the practice they contemplate this moon image, and thus see more clearly their own Buddha nature.

It is our egos that limit us, and that keep us from recognizing our Buddha nature and becoming enlightened.

A 400-hundred-year-old stone basin at the tsuboniwa, a small viewing garden outside the dojo.

Your ego prevents you from being enlightenment, but it is too tough to crush. The moon in the scroll also plays the other role as the projection of your ego. So our alternative approach is to expand the ego until it contains the whole universe, and the moon meditation is one way we do that.

In our tradition, which we can now practice in our new dojo, this expansion of ego brings us to our unlimited understanding of ourselves as Buddha nature, beyond ego.

0
SHARES
Share
Posted Under: 2014, Fall, Sangha News
About the Author: Taijo Imanaka
Taijo Imanaka became a disciple of the master of Rengejo-in monastery on Mt. Koya, Japan, in 1992. He was ordained in 1994, also on Mt. Koya. He practices a form of Vajrayana Japanese Buddhism.