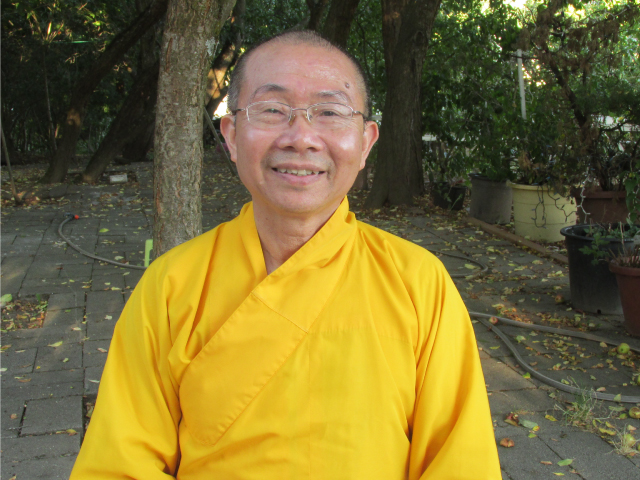 “It itches,” Trung said with a rueful smile about the insulation, making scratching motions over his arms. 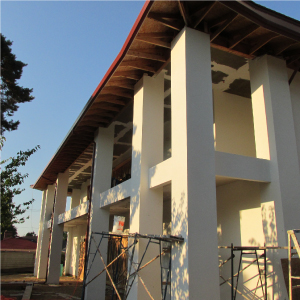 The new two-story temple was designed partly in Vietnamese style.

This summer, Trung and other members of the South Seattle Vietnamese temple have been pushing hard to complete the new temple to prepare for an important visitor: the Jade Buddha.

The nine-foot-high Jade Buddha statue, carved of green jade, has been traveling around Asia, Europe and North America, with a message of peace. Considered at four tons the largest Buddha ever carved from jade, it was last in Seattle in 2010 at Co Lam Temple, also Vietnamese.

But this time it’s visiting the Ten Thousand Buddha Temple, Sept. 11 through 21. In the process it has given Trung a chance to finish a long-sought project: Finishing the expansion of the expanded temple building, to better serve the temple’s several hundred members. 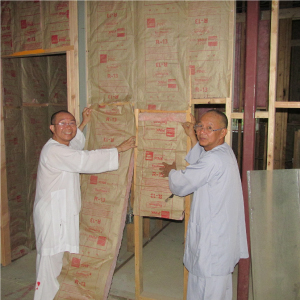 Ven. Trung and a fellow monk install insulation in the new temple this summer.

On big holidays, like the Buddha’s birthday or Vietnamese New Year, so many people come that some have to stand outside.

“So many people coming I don’t have room,” he said. “That’s why I decided to build the temple.”

This has made for a very busy summer, as Trung, a fellow monk, and temple members, have been pushing to get the temple done before the Jade Buddha arrives.

“We’re very rushed to get the job done before then,” he said in early August. “Sometimes we work until 9 or 10 in the evening.”

Along the way, Trung, who has a doctorate in Buddhist studies from the University of Southern California, has learned a lot of on-the-job carpentry skills he never expected. 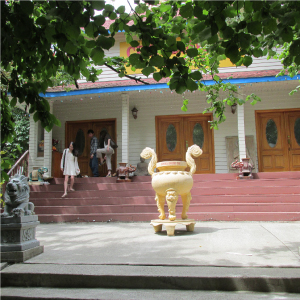 The main entrance to the current temple, where the Jade Buddha will be displayed outside.

“This is a job I learned while building up the temple,” he said. “The first time I used a hammer, I hit my hand.”

The temple also is called the Duoc Su Temple, in Vietnamese, and the Buddhist Cultural Center of the Northwest.

For Trung, 46, it’s been a long journey, from his native Vietnam, to Australia, and then to Seattle, where he arrived in 1996.

“First when I came to this area, this looked like a jungle, with a single-family house,” he said on a Sunday afternoon visit, sitting at a table outside the temple’s sunny gardens.

Around him Vietnamese families were sitting with each other and with their children, chatting after a morning service that attracted more than 100 people. One parent held her child’s hand, nearby several children crouched down, playing with a small, gray dog. 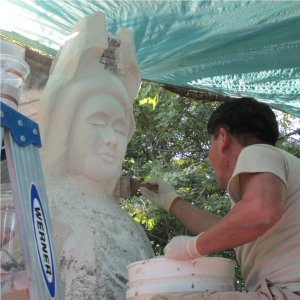 A sculptor and temple supporter works on the Kuan Yin statue.

Nearby a Vietnamese sculptor was up on scaffolding adding to a tall statue of Kuan Yin, which looks serenely over a large flower garden, and a nearby orchard of plum trees.

Not a word of English can be heard. Everyone is speaking Vietnamese, and to a guest it feels just like visiting a temple somewhere in Asia.

Trung is a patient man, and he’s nurtured the growth of the temple slowly. When he arrived the single house sat on three-quarters of an acre.

Today the property has expanded to seven acres, after a series of acquisitions, and the house has been stretched and transformed into a temple, glittering inside with a gold-colored Buddha. 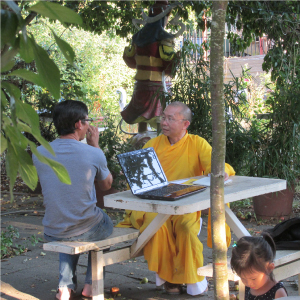 A donor speak with Ven. Trung.

During retreats and big events that temple is packed with people, so that’s why for the last two years Trung and the temple members have been building a larger temple.

At 27,000 square feet, the new two-story structure looms over the current temple. With an exterior balcony around the second floor, and the corners of the roof upturned, it looks like a structure that would be at home anywhere in Asia.

When complete the temple will offer a spacious open hall on the upper floor, and living quarters for 16 monks on the ground floor, as well as a small café for visitors.

Trung has also along the way learned about the intricacies of Seattle planning process, and it took him five years just to get the permits. Since then the building has been rising slowly, as people have donated funds to buy materials and hire contractors for the complex work, like plumbing and electrical, that Trung can’t do himself. 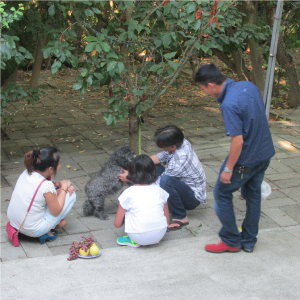 Children play with a puppy after a Sunday gathering at the temple.

Now the pace is picking up, and during one visit volunteers were hard at work on the temple, and during another, a man came and offered money to help pay for the work.

Many of the statues already have arrived, and upstairs is a 12-foot-high medicine Buddha statue from Vietnam, and downstairs another statue that was donated. The building will also include dragons on the roof corners to guard it, in a traditional Vietnamese way.

When the Jade Buddha comes, it will be open to the public in an outdoor pavilion at the temple’s east end, facing the orchard.

While Trung is pushing to get the temple done for the visit, he’s looking ahead even more to what the expanded space will mean for members. He’s planning a big grand-opening ceremony in 2015. The temple is at 6918 42nd Ave S. in Seattle.

“So many students come here, they want me to organize dharma class, but I have no room for them,” Trung said. “If we have a new temple there we will have more space, and may organize class for them.”