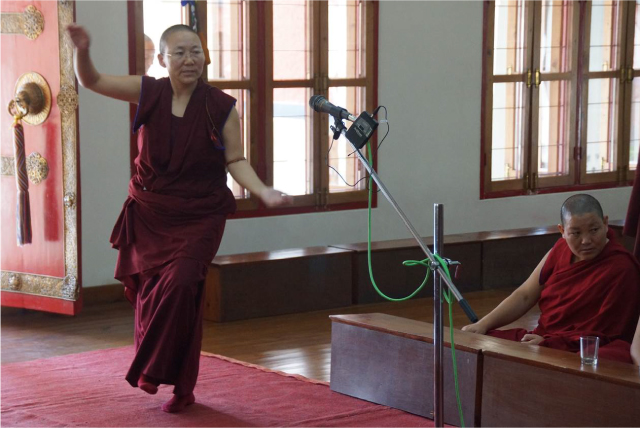 An nun defends her position during the oral debate portion of the exam, May, 2014.
Photos by: Dolma Ling staff and nuns.

A group of Tibetan nuns have passed the halfway mark toward a historic milestone: Winning the equivalent of a Buddhist doctorate degree, until recently almost exclusively reserved only for men.

In May, 22 nuns passed through the second stage of examinations for a “Geshema” degree, the female equivalent of a Geshe degree. The examination process began in May, 2013. 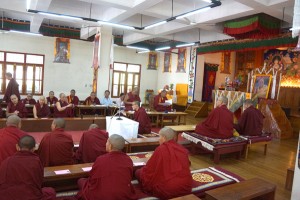 The Geshema and Geshe degrees, similar to a doctorate in Buddhist philosophy, are the highest level of training in the Gelugpa school of Tibetan Buddhism.

While the examinations took place in Dharamsala, India, where many Tibetan Buddhist nuns study and practice, there’s a Northwest angle to this story.

That’s because about half of the 22 nuns who have passed the first two rounds of exams have, to varying degrees, received financial and educational support from Tibetan Nuns Project.

The Tibetan Nuns Project is headquartered in Dharamsala, but its primary outreach and fund-raising arm is a small office in Seattle. It supports more than 700 nuns in eight nunneries in India through a program of individual sponsors.

Sponsors come from around the world, but most are North American, with funds channeled through the Seattle office. Several of the nunneries also receive direct support from Tibetan Nuns Project. 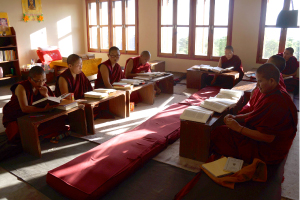 A group of nuns study together to prepare for the exams.

The Geshema exams are taking place over four years and are the culmination of the nuns’ rigorous 17-year course of study. These women pioneers have taken the opportunity to accomplish a level of scholarship and Buddhist training that was previously almost exclusively available only to men.

Ven. Thubten Chodron, a Westerner who has been a Tibetan Buddhist nun for 37 years, and who is abbot of Sravasti Abbey north of Spokane, Washington, said in a note that the role Tibetan Nuns Project has been very important in the nuns’ steps toward winning the degrees.

“The Tibetan Nuns Project has been instrumental in opening up educational opportunities for Tibetan nuns,” she said. “I’ve been particularly impressed that they work to make all the nuns ‘financially equal,’ in the sense that funds are shared with everyone in the community and used for everyone’s benefit.” 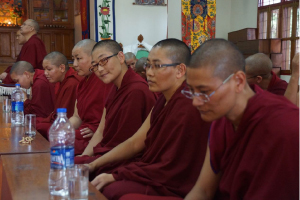 Nuns waiting for their turn during the exam debates.

The nuns who successfully pass the last two rounds of examinations, in 2015 and 2016, will become the first Tibetan Buddhist nuns from Himalayan regions to win this degree.

Winning the Geshema degrees will be a turning point for the women, because the degrees will make them eligible to assume various leadership roles, in the monastic and lay communities, previously reserved for men.

Accomplishing the prerequisite education, and then the examinations, are a clear and objective way to establish they are qualified to take on the same responsibilities and roles as monks.

Ven. Chodron said achieving the Geshema degree will be important for Buddhism in many ways.

“Having a geshema degree gives nuns public recognition of their educational achievements and knowledge of Buddhist teachings,” she said. “This inspires the public’s faith in them being qualified teachers and thus increases the nuns’ self-confidence. Younger nuns, seeing the achievements of the senior nuns, are thus inspired and encouraged to use their own potential to become excellent scholars and practitioners.” 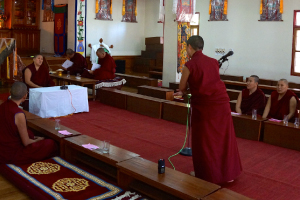 The nuns’ achievements are all the more remarkable because some of the women sitting the doctoral exams were totally illiterate when they escaped from Tibet. They could not even write their own names.

The opening up of this opportunity for nuns would not have been possible without the support from His Holiness the Dalai Lama, from the Department of Religion and Culture of the Tibetan Government in Exile, and from high lamas and teachers.

The turning point was a 2012 decision by Tibetan leaders, after years of discussion and deliberation, to empower Tibetan Buddhist nuns to sit for the examinations. 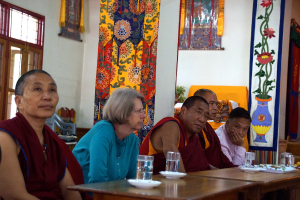 Representatives of Tibetan Nuns Project, the Tibetan government’s Department of Religious Culture, and participating nunneries observe the oral debate exam. These include TNP co-directors Elizabeth Napper, center, and Lobsan Dechen, to her right.

Before that decision some nuns had completed the 17-year program of study, but could not take the examinations to earn the Geshema degree.

Supporting education was the primary goal of the founders of Tibetan Nuns project, who created the organization in 1987 to provide education and humanitarian aid to Tibetan Buddhist nuns living in India.

The founders acted partly in response to a stream of Tibetan nuns arriving in northern India as exiles from Tibet. While there was financial and educational support for monks from Tibet, there was comparatively little available for nuns.

The project’s sponsorship program is an opportunity for people globally to support and connect with the nuns. Hundreds of sponsors from around the United States provide food, shelter, education and health care to the nuns through the Seattle office. 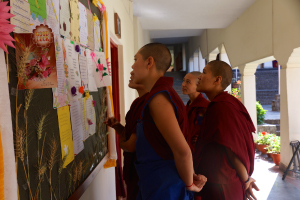 In addition to providing a safe place for the nuns to live and practice, the nunneries also have provided a level of religious and secular training that was unobtainable for nuns in the primarily male monastic society of old Tibet.

Chodron said the exams are a turning point for many of these women.

“Some of the Tibetan nuns I have known for decades are now taking their geshema exams,” she said. “They are excited and nervous about this, and I’m delighted that they finally have this opportunity. Let’s wish them well and thank all their teachers and supporters who have made this possible!”

She added that this historic step gives her great hope for the future of Buddhism. 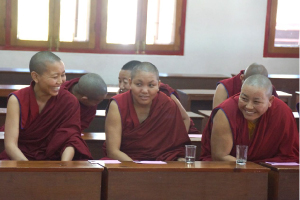 “Having knowledgeable and skilled teachers and wise meditators who are trained in ethical conduct, concentration, wisdom, and altruism is of great benefit to others who can learn from them,” she said. “It enables the dharma teachings to spread and flourish for a long time.”

6
SHARES
Share
Posted Under: 2014, Dharma Education, Fall
About the Author: Heather Wardle
Heather Wardle is a Buddhist practitioner and consultant for Tibetan Nuns Project. She lives in Vancouver, B.C.