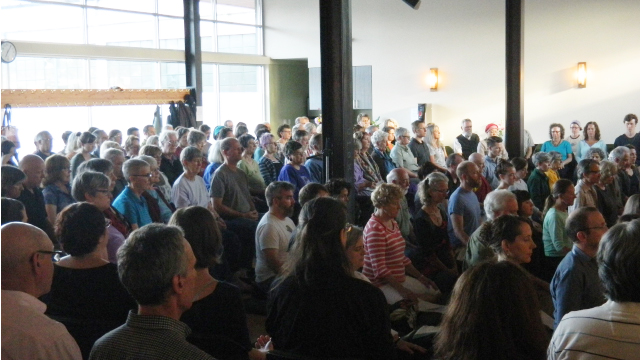 The Seattle Insight Meditation Society (SIMS) sits together July 22, for the first time in their new home.
Photos by: Gary Maigret.

Seattle Insight Meditation Society celebrated the opening of its own dharma center this summer, after more than 20 years of renting space.

More than 200 people gathered for the July 22 inaugural sit and commemoration at the center, in an area immediately south of downtown Seattle, called the “SODO” district.

As the ceremony started, Guiding Teacher Rodney Smith rang the bell to call the hall to presence. The chatter that had filled the hall without becoming a din quieted into meditative silence. The space felt contained by the harbor-area urban environment – the occasional muffled ding-ding-ding of nearby rail crossings, the whoosh of passing light rail trains, sometimes the cry of a seagull.

The Seattle Insight Meditation Society (SIMS) is a Buddhist meditation and practice group whose mission is offering the Buddha’s teachings on insight and awareness to all those who seek them, and to support a Seattle-based spiritual community.

A primary benefit of operating our own Seattle Insight Meditation Center will be the scheduling flexibility it will provide. It’s now possible to offer morning classes, daytime events, and meditation groups, on all evenings of the week. Seattle Insight Meditation Society, also called SIMS, also can move some retreats and classes to the center from other sites, saving money and effort that previously went into scheduling rentals.

And the low cost also means low overhead for teachers who want to organize new or experimental classes that might draw smaller attendance, making those now possible opportunities.

SIMS’ activities are all based on mindfulness, or Vipassana practice, and are taught in the same tradition as Insight Meditation Society, a national organization. SIMS activities include organizing weekly sittings, classes in insight meditation, nonresidential meditation retreats and “days of mindfulness.” The group also hosts visiting teachers for dharma talks, helps sangha members support each other, and offers community outreach. 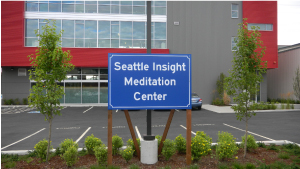 The new center takes up the ground floor of an office building in the area south of Seattle’s downtown, and its athletic stadiums.

SIMS formally incorporated as the non-profit Seattle Insight Meditation Society in 1998. As membership grew, the group moved several times, for 11 years offering teachings and practice in Bloedel Hall, the basement of St. Mark’s Cathedral on Seattle’s Capitol Hill. There attendance on full evenings could swell to 250.

The board has been renting supplemental space for daylong retreats and classes from churches and other sites around the city.

The opportunity for the new center came from former SIMS Board President Phil Crean and his wife Cora Edmonds. Their international seafood company had recently constructed a new office building in the SODO district, with a first floor intended for rental.

Crean and Edmonds already had been leaders in the SIMS social engagement program through their support of the Namaste Children’s Fund project, and they saw the opportunity to do more. They offered SIMS a five-year lease with a two-year extension at SIMS’ discretion. SIMS pays only utilities.

Board members for years had been interested in owning a location, but some have been uncomfortable with the commitment of a mortgage that would have been a burden on the community.

“I liked the impermanence of being nomadic and being able to teach nationally as well as locally,” teacher Smith said.  “Agreeing to the new center was a confluence of multiple factors: first I am older and traveling less; I was inspired by (insight teacher) Gil Fronsdal’s recently opened non-residential retreat center (in Redwood City, Calif.), which operates with an all-volunteer staff; Phil and Cora’s rent-free gift was too good to turn down; and lastly there is good support from a dedicated sangha and from local teachers-in-training and a dharma leadership program.”

The commemoration of the new center began with recognition of the eight board presidents who have led SIMS during its 20-year history, six of whom were in attendance. 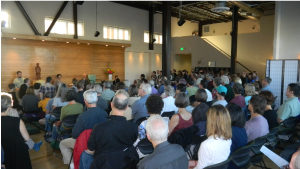 Following the recognition of past presidents, teacher-in-training Bonnie Duran led a Native American smudging ceremony, accompanied by sangha members Chris Charles of the Duwamish Tribe, and Jeff Smith of the McCaw Tribe.

The ceremony helped bless the new building, which is on land that historically was Duwamish, by metaphorically smudging it with smoke from a sage bundle, along with water representing the nearby Duwamish River, shaken from cedar branches. (Practical considerations limited the use of actual smoke and water to an earlier ceremony, around the exterior of the building.)

The smudging was followed by Local Dharma Leader Ellen McCown leading the sangha in a metta chant, also called loving kindness. Teachers-in-training Tim Geil and Kari Pedersen then led the taking of refuges and reciting of precepts.

All of this took place in the beautiful high-ceiling center, which was flooded with light from the large windows.

As she designed the center, Edmonds turned for inspiration to several Buddhist centers and meditation spaces, and also from the hall at Insight Meditation Society in Barre, Mass., where she had coincidentally attended a recent week-long retreat.

Edmonds knew she wanted to create a sense of human scale for SIMS in the two-story commercial interior. The natural materials and simple colors she encountered in other meditation spaces resonated with her sense that it needs to be the sangha that makes the space, not the décor.

The wide but shallow space required attention to sightlines, and true ingenuity turned an ADA-compliant bathroom into a small but functional kitchen with a tea counter exposed to the main room. 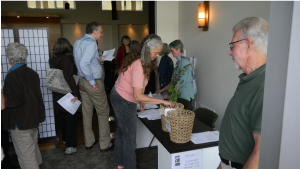 People make offerings, and pick up chant sheets, on the first evening.

Michael Ellis, a sangha member and carpenter, created a beautiful hooked coat rack which runs nearly half the width of the front window-wall with a long row of shoe racks below. Cubbies at the side of the space allow for bag storage.

The windows themselves are lined with rice paper up about halfway – enough to block the view of the parking lot and create a sense of privacy, while still allowing light and a glimpse of the tree-covered hill in the near distance.

The finished space has 160 chairs and 50 zabutons in an arc around the slightly raised dais, offering 2,800 square feet in the main room. The bathrooms, a mezzanine/library, and the kitchen bring the space up to 3,500 square feet.

Volunteerism from the sangha as a whole continues to be essential. SIMS has always been an all-volunteer-run organization and intends to remain so, even with the responsibilities of operating a center full-time.

A team of more than 34 volunteers worked to open the center and six volunteer teams are committed to manage it, with leadership roles for cleaning, property management, trash/recycle, audio, supplies, and event scheduling.

One obvious impact of the new center: a new home for the library. It moved from the home of current volunteer librarian Bonnie Pasek, where it rested in three bookcases – one each in her living room, dining room and kitchen.

Pasek took on the library from Lloyd McReynolds, a condo-dweller who had books for loan in every nook, including above the washer and dryer! Now members can view the entire collection at once rather than needing to request books ahead of time, or only view the subset Pasek was able to bring each week.

On opening night the hall was nearly full, but the new six-speaker sound system made teacher Smith’s every word clearly audible.

During his remarks Smith drew attention to the city noises outside, as a reminder that SIMS’ practice is to ground ourselves amidst full lives, not to withdraw.

As the crowd gradually filtered out at the end of the evening a significant change was already apparent: No longer did the sangha need to pack up chairs and zabutons at the end of the night. And the statue of Kuan Yin, representing compassion, remained blessing the space.

5
SHARES
Share
Posted Under: 2014, Compassionate Action, Fall
About the Author: Shaula Massena
Shaula Massena has practiced yoga at various studios in Seattle since 1999, began vipassana mediation with the Seattle Insight Meditation Society four years ago, and is an active volunteer.

About the photographer: Gary Maigret took the photos during the July 22 opening of the new SIMS center, and died of a sudden heart attack just nine days later. Maigret was an energetic and dedicated member of the SIMS sangha, freely giving his time to organize SIMS's annual potluck picnic (where he and his wife, Kathy, met in 2011), coordinate SIMS's non-residential retreats, and pitch in whenever volunteers were needed (as with this article). He will be missed.