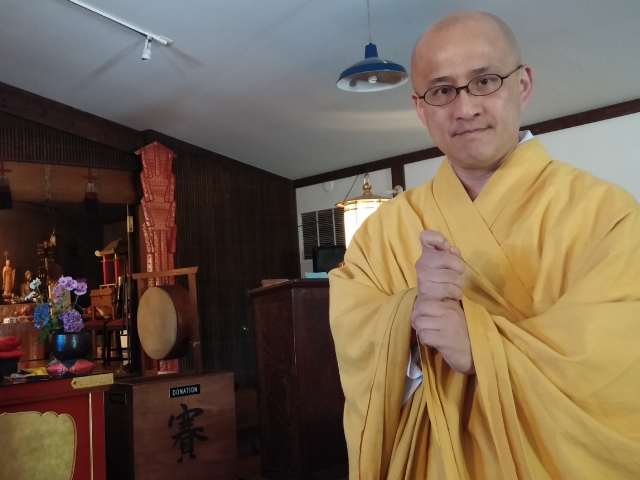 Seattle University has included Buddhists in its newly expanded interfaith council, part of widening the council to include people from non-Abrahamic traditions.

Expanding the Ecumenical and Interreligious Advisory Council to include people who practice Buddhism as a non-theistic spiritual tradition, will add a new dimension to the discussion, said Dr. Michael Trice, assistant dean for Ecumenical and Interreligious Dialogue at the Seattle University School of Theology and Ministry, and assistant professor of theological ethics and constructive theology.

Some topics that are natural to theists, such as the oneness of God, might launch discussions with non-theists into totally unforeseen directions, said Trice, speaking from the Jesuit Catholic university’s Seattle campus.

“That gets richer, and there’s more room to explore,” he said. “There’s no going back from this. We need this kind of plurality.” 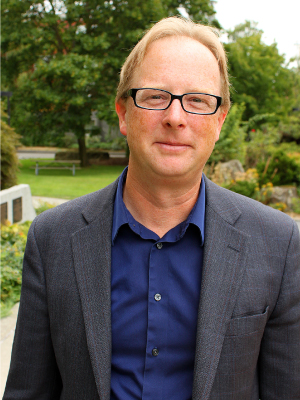 Dr. Michael Trice, assistant dean for Ecumenical and Interreligious Dialogue at the Seattle University School of Theology and Ministry, and assistant professor of theological ethics and constructive theology.

The recently expanded council, created by the Seattle University School of Theology and Ministry, continues and expands upon work started by the school’s Interreligious council.

This group 10 years ago brought together Jewish and Christian leaders for discussion, and recently added Muslims, said Catherine Smith, assistant to the assistant dean of the School of Theology and Ministry. This school year the council will expand further to include Hindus, Sikhs and Buddhists.

Rev. Imanaka, who was travelling in Japan at press time, wrote in an email that the council’s formation marked the start of a new era.

Four hundred and fifty years ago, when Jesuits first arrived in Japan, they told followers of his lineage’s founder, Kobo Daishi, that the sacred mountain Koyasan was evil and that his practices were “abominable,” Imanaka wrote. But now, to have a member of the 53rd generation of the misunderstood monk invited to an ecumenical council, is wonderful.

“It’s beautiful!” Imanaka wrote. “I feel Christianity, the Jesuits and Seattle University have kept evolving. I deeply respect their effort in the evolution which made our friendly re-encounter possible.”

Wilhelm, who also serves as a “local dharma leader” for Seattle Insight Meditation Society, said he was honored to be included in the council.

“I think it’s wonderful that Seattle University’s school of theology is broadening its view beyond the Abrahamic traditions,” Wilhelm said. “It’s great we can have this dialogue, and they can bring it to their students.” 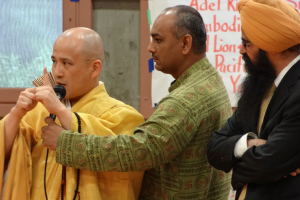 Imanaka, with an unnamed Hindu priest and Sikh priest, blessing new state legislation that gives people in non-Christian religions days off for their unique holidays.

The council will meet three times per year, one evening per quarter, except for summer quarter. It will be led by Trice.

To foster discussion the council is to have between 15 and 20 members, each of whom is asked to participate for two years. “The structure of the council is meant to be flexible, so we have a real opportunity for growth,” Trice said.

Because the aim of the council is to promote a better understanding of the ideas and experiences of various spiritual traditions, council members were selected not so much as “representatives” of their particular traditions, Trice said. Rather, they were selected as community influencers from various spiritual paths, who could engage one another in a sincere, meaningful way.

While meetings will have an agenda, the structure of the discussions will be secondary to the human interaction that occurs. Topics might include contemplation, meditation, or prayer, and how people of various traditions experience these spiritual practices.

“The illuminating ideas will arrive out of the people, not the agenda,” Trice said.

The aim is to have a cross-fertilization of ideas lead to a heightened spiritual awareness at the university and in the community at large. Success of the project will depend on whether council members can go beyond diversity – an acknowledgment of differences – to achieve something deeper that Trice calls pluralism. He identifies the latter as an engagement that creates a common understanding and appreciation of other people.

“That’s something no one has control over,” Trice said. “It happens in the relationships.” 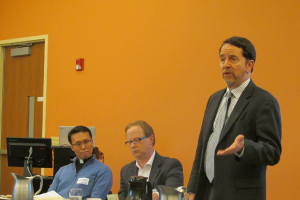 Imanaka said the history of Buddhism in Japan offers an example of pluralism. When Buddhism came to Japan, Shintoism was the prevailing religion, yet there was no war to determine a dominant religion. Today, Buddhist and Shinto temples sit side by side, and many home altars show symbols of both religions.

“I believe this coexistence has been realized mainly because of the Buddha eye, finding the same preciousness in others as in oneself,” Imanaka said. “As we and our society cannot forsake science, Buddhist points of view can play a supplemental role in helping the world become a more harmonious place.”

Trice said Seattle University’s 7,400 students will benefit from a greater understanding of diverse spiritual practices, in a world in which religious conflict often plays a role in shaping the news. Professors will bring ideas from the council to their classes, and an interreligious, multi-faith core course might be developed, in which community members speak to students, Trice said.

He added that the university has a mission to educate the whole student, to foster professional development, and to empower leaders for a just and humane world.

Preparing students for a diverse cultural world is essential, Assistant Dean Smith said. “The fact is that the world is getting smaller,” she said. “Either live in peace or figure out why you can’t … Peace is going to depend on the faith component.”

Seattle University is not totally alone in developing some sort of “pluralism” program. Harvard University has a Pluralism Project, which examines the growing religious pluralism of American life. And the University of Washington has Difficult Dialogues, a program about Southeast Asian American pluralism. But Seattle University seems to be taking the lead in organizing ecumenical dialogue.

Wilhelm said that Buddhism offers much that supports pluralism.

“There’s something very democratic about the dharma. The Buddha was very clear that anybody could awaken to reality,” he said. “At a time of hierarchy and differences, that is one of the gifts of the Buddhadharma – that all beings can awaken.”

Trice said the university’s Jesuit history plays a role in this openness to experiencing the “other.” 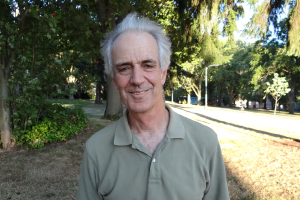 Steve Wilhelm, one of two Buddhist delegates to the council.

Jesuits have had a long tradition of leaving home, going to an unfamiliar place, and living with a different group of the people, sometimes for 40 years, not as missionaries of conversion, but in a process of self-conversion and awakening to a broader spirituality. “I think this is in the bones of this place, and I think that’s a virtue.” Trice said.

Trice, who has sought pluralistic experiences all his life, said this whole project is near and dear to his heart..

Baptized in the Episcopal Church, Trice attended a Jesuit university and is Lutheran. He served as the associate executive for ecumenical and interreligious relations in the Evangelical Lutheran Church in America, before coming to Seattle University in 2011.

Trice said that the Latin root of the word religion is religio, which means to bind together.

“That religious sentiment, to belong to one another, is really compelling,” Trice said. “I have a certain passion around it, because this is how I see my own life.”

0
SHARES
Share
Posted Under: 2014, Dharma Education, Fall
About the Author: Bob Baumgartner
After working in small newspapers near Seattle, Bob Baumgartner moved to Taiwan, where he taught English, studied Chinese, and was the first foreigner to earn an MBA at Cheng Kung University, Tainan. He now works in testing at Microsoft for Wipro, an Indian multinational company. On the weekends, you might find him at the Seattle Meditation Center.