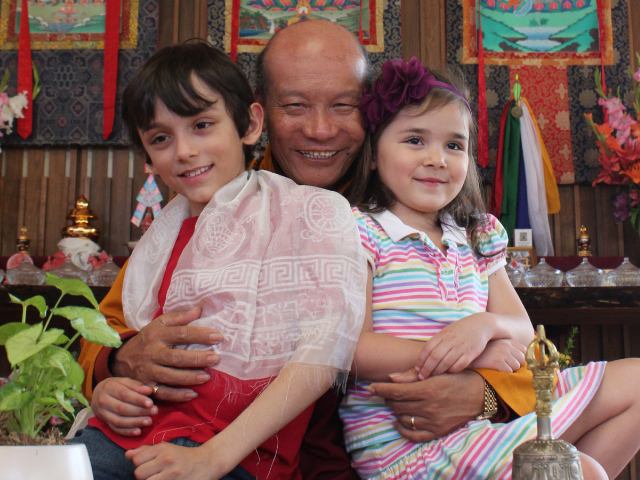 Saraha Children’s School, created to offer secular and dharma education to young children, is opening for its first classes this fall.

Since then, through the kind intentions and efforts of students, parents, volunteers and a newly-hired professional staff, Saraha Children’s School has swiftly become a reality. 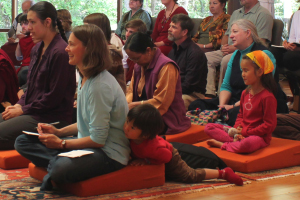 Enrollment is open to the public, and the school is currently accepting applications for new students for kindergarten through eighth grade. The school year began on Sept. 4 and will continue throughout the year, a schedule mirroring that of the general public schools in Eugene.

The school’s general purpose is to offer children and parents an integrated curriculum of excellent academics, reading, writing, math, science and social studies; together with an introduction and training for children in traditional Buddhist arts, such as meditation and the language and practices of compassion, wisdom and peace.

Its greater goal is to start young people on their paths to becoming healthy, intelligent, educated, grounded, peaceful, wise and compassionate adults. The school intends to help young people fulfill their potential and promise, and to ready them for success and wisdom at every stage of their lives.

This greater goal of course has a spiritual basis and intent. The integration of these two goals, the general educational and the spiritual, is the actual meaning of the term “integrated curriculum,” which appears regularly throughout the school’s catalogue. 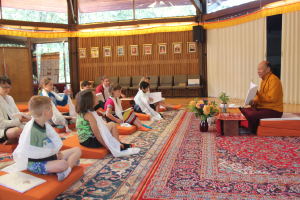 The school will operate under the direction of the Saraha Nyingma Buddhist Institute, and within the framework of the Institute’s overall educational focus and activities as a registered 501(c) (3) status non-profit organization.

The Saraha Nyingma Buddhist Institute was founded in 2011, using a facility originally created by the Unitarian Universalist Church of Eugene, and now offers a full range of dharma classes and events, including from other Buddhist traditions. The institute was founded in particular to commemorate a 1980 visit by HH Dudjom Rinpoche, Jigdral Yeshe Dorje, then head of the Nyingma School of Tibetan Buddhism. Here’s a link to an earlier story about the Saraha Nyingma Buddhist Institute.

Saraha Children’s School will operate within the institute’s 7,000-square-foot educational and temple facility, and upon its beautifully forested 2.5 acre campus grounds. During the weekdays, the school will occupy and utilize the entire space as its own. 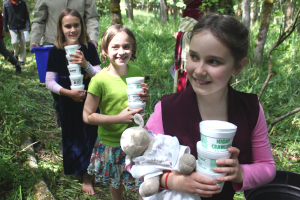 Young students participate in a ceremony of “live release” of captive animals, a practice common to many Buddhist traditions, at Saraha Institute.

For the first class period of the day, the entire student body assembles “upstairs” in Saraha Temple to meditate, pray and receive child-oriented introductory teachings in the language and lessons of the dharma. Lunch, and a brief concluding meditation assembly, also occur in the rooms upstairs.

For the rest of the day, during which traditional academic subjects will be emphasized, classes will be divided by project, age and grade, and will meet in the 2,500 square feet of dedicated classrooms downstairs.

Throughout the day, children will also have supervised access to the school’s large playground to the west of the School, and to the natural forest to its east.

The school logo symbolizes its intent. It is the Tibetan word “SA,” meaning earth, base, or foundation, encircled by the five primary colors of white, yellow, red, green and blue. 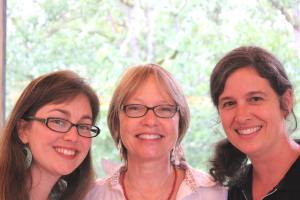 “SA,” in Tibetan, also specifically refers to the “bhumis,” the technical term for the enumerated stages of the path to enlightenment.

In Tibetan Buddhism the five colors have symbolic meaning as representatives of the five physical elements of water, earth, fire, wind and space, the here and now. At the same time the colors represent the five aspects of Buddha’s wisdom.

The school’s motto “… from light to light” derives from the poem “A Letter to a Friend,” by the great enlightened saint and Buddhist philosopher Nagarjuna, in which he says:

Some they go from dark to dark

And some from light to dark

Taken together, this compound symbol and this brilliant aspiration simply mean that Saraha Children’s School intends to help children attain a stable base, to become grounded and founded in the world, and simultaneously to inspire and raise their minds and spirits to a higher goal and a higher ground. 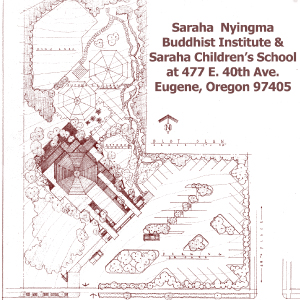 Courses will be offered in a small-class, personalized instruction format, using project-based learning methods. Regarding academic standards, apart from general excellence one of the school’s aims is to enable students to always meet or exceed the Oregon Department of Education’s Common Core standards for their age and grade.

To this end, students will be tested to these standards in the required school years. The purpose of this is to allow for parity between the results of education received at Saraha Children’s School and that received elsewhere.

But although the Common Core will be recognized in this way, the school will not adopt the educational templates of the core for particular grades. Rather, Saraha Children’s School leaders anticipate students will achieve the intended results of the Core as a by-product of skills taught within the school’s own personalized curriculum.

Accomplished spiritual guides and secular teachers are contributing to Saraha Children’s School, to enable it to accomplish these goals. 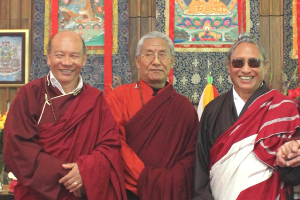 The school’s Buddhist directors, Lama Directors, Lama Sonam Tsering and Lama Tsering Gyaltsen, both have the equivalents of doctoral degrees in Buddhist studies. In addition, the school has recruited an excellent staff of professional and teachers and administrators, including Principal Susan Nakaba, and teacher Jennie Goodlett.

The lama directors, in particular Lama Sonam Tsering, who actually developed dharma curriculum and taught Western children from ages 5-18 for many years, are primarily responsible for creating Buddhist curriculum for each age and grade.

The general academic curriculum is the primary responsibility of Nakaba and Goodlett.

Nakaba’s educational career of more than 30 years is replete with landmarks of creativity and innovation including multiple national educator awards. Twice she went to the White House, once to receive a “National Blue Ribbon School Award,” and next to receive a “National New American High School Award.” She visited the Kennedy Center to receive the “Kennedy Center National School of Distinction Award,” and received the Siemen’s National Science, Math and Technology Award, and many others. 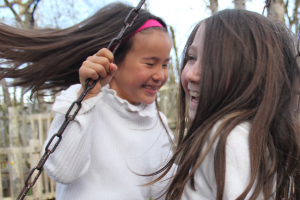 Students playing on the tire swing at Saraha Children’s School.

It is continually inspiring for those of us working to create this new school that educators of such accomplishment and talent are willing to offer their efforts to make it happen.

In addition to regular teachers, many volunteers have come together over the summer to undertake the practical burdens of building this new school, including fundraising, renovating and building classrooms, improving the playground, fencing and landscaping in the forest, publicizing the new school and recruiting parents and children for its inaugural year.

As with any new undertaking, there is still much work to do, and Saraha Children’s School will need more help to succeed. Please contact the school with questions, or with kind offers of assistance, help and support of any kind.

0
SHARES
Share
Posted Under: 2014, Dharma Education, Fall
About the Author: Karma Thrinley
Karma Thrinley is a member of the Saraha Nyingma Buddhist Temple, and practices in the Nyingma tradition of Tibetan Buddhism.