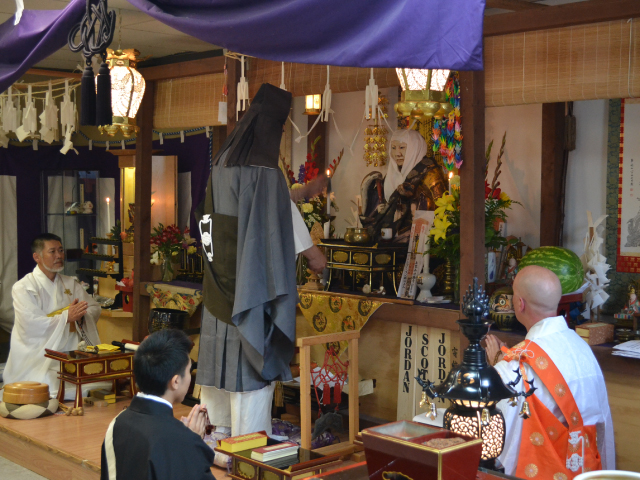 Seattle Choeizan Enkyoji Nichiren Buddhist Temple took an important step in its growth in June, with the eye-opening ceremony of its new statue of founding teacher Nichiren Shonin.

This eye-opening ceremony deepens the lineage connection for our small temple, which has been growing steadily since it was founded four years ago. Here’s a You Tube video of the ceremony. 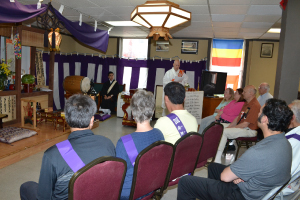 We believe that the fortuitous appearance of this wonderful new statue of Nichiren Shonin is a sign of our continued success, and encouragement for us to continue working hard at spreading the teachings of the Eternal Buddha Shakyamuni, the Lotus Sutra, and Nichiren Shonin.

Nichiren Shonin (1222-1282) is the Japanese monk who founded Nichiren Shu, the school of Buddhism to which the temple belongs, and his statue is frequently placed on altars in member temples.

The purpose of an eye-opening ceremony is to consecrate the object being eye-opened. Until the ceremony is performed, the object is merely an object of art, not a sacred object.

In Nichiren Shu, this ceremony is performed specifically to activate the Buddha nature of the object in accordance with our tradition’s teaching of Ichinen Sanzen. In English this is often translated as “The Three Thousand Conditions in one Moment of Thought,” and explains the inter-relatedness of all things, and the enlightenment of plants and non-sentient beings. 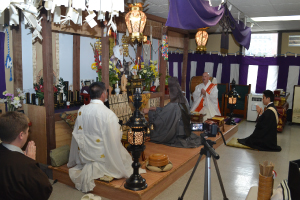 This particular statue was discovered by chance by Rev. Kanjin Cederman, head priest of Choeizan Enkyoji, earlier in the year at Kyoto Arts and Antiques in Seattle. Experts in Japan estimate that the statue is from the early Edo period, probably the 1600s or 1700s. It is unusually large for a statue of Nichiren Shonin, and is in an unusual style.

Assisting Rev. Toda were Rev. Nichiyu Hanya from Osaka, Japan; Rev. Toda’s son Zensai Toda, who is a shami or student priest; Eisho Rosman, one of the temple’s lay leaders; and Rev. Cederman.

The ceremony began with Rev. Toda and Rev. Hanya entering the hondo (main hall) while the 50 members and guests loudly chanted the Odaimoku (great title) of the Lotus Sutra and Shami Toda beat on the temple’s main drum. 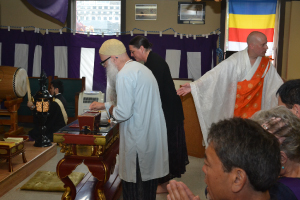 This famous Odaimoku chant, Namu Myho Renge Kyo, is roughly translated as “devotion to the mystical law of the Lotus Sutra.”

After they were seated, the priests began the eye-opening ceremony. The entire ceremony was chanted in Shindoku, a traditional way of reading Chinese characters with Japanese pronunciation. They opened by singing Shomyo, a Japanese liturgical “hymn” that employs the yo scale, a pentatonic scale with ascending intervals of two, three, two, two, and three semitones.

Rev. Toda then read a prayer, following which the sangha joined him in chanting Kaigyoge (verses for opening the sutra). 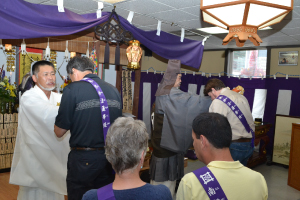 The priests then chanted portions of the Lotus Sutra at an extremely fast pace accompanied by a mokusho, a type of drum unique to Nichiren Buddhism that is used to keep the beat during chanting. The drum has an unusually sharp sound, so that it can be heard over the sounds of other drums, chanting, and bells.

Kaji Kito literally means “incantation prayer,” and is a kind of faith healing based on compassion and faith in the Lotus Sutra. A Kaji Kito blessing can only be given by a priest who has completed the 100-day aragyo training. Onjuin is one of two Nichiren Shu temples in Japan that offers this training.

Rev. Toda and Rev. Hanya performed the Kaji Kito ceremony facing the sangha members and guests. During the ceremony the two wielded ceremonial swords called bokken to write sacred letters in the air, while praying that everyone would be able to cut through their ignorance and be embraced in the compassion of the Buddha.

Attendees were then invited to come to the front to receive personal blessings, during which the priests touched the head, shoulders, and backs of participants with scrolls of the Lotus Sutra. 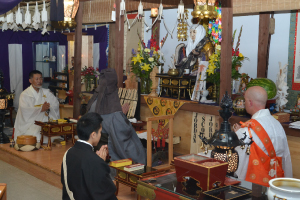 Following the Kaji Kito blessing, the eye-opening ceremony continued with Rev. Toda chanting directly to the statue of Nichiren Shonin.   At that time he inscribed the inside of the statue and symbolically painted in the eyes of the statue.

The ceremony concluded with everyone again chanting the Odaimoku. Sangha members and guests were invited to come to the altar to offer incense to the Buddha during the chanting.

If you would like to learn more about the Buddhism of Nichiren Shu, or if you would just like an opportunity to see our new statue, please feel to visit us. We would love to see you.

Seattle Choeizan Enkyoji Nichiren Buddhist Temple is in Seattle’s International District. It is open for services every Sunday beginning at 10:30 am and every Wednesday at 6:30 pm for shodaigyo (a kind of chanting meditation).

We also offer shodaigyo on the 3rd Sunday of the month at 7:00 pm at the Ballard Odd Fellows Hall in Ballard.

0
SHARES
Share
Posted Under: 2014, Fall, Sangha News
About the Author: Pamela Reaville
Pamela Reaville is president of Seattle Choeizan Enkyoji Nichiren Buddhist Temple. She became a member of Nichiren Shu in 2002 while living in Yokohama, Japan, and has been following the tradition since then.