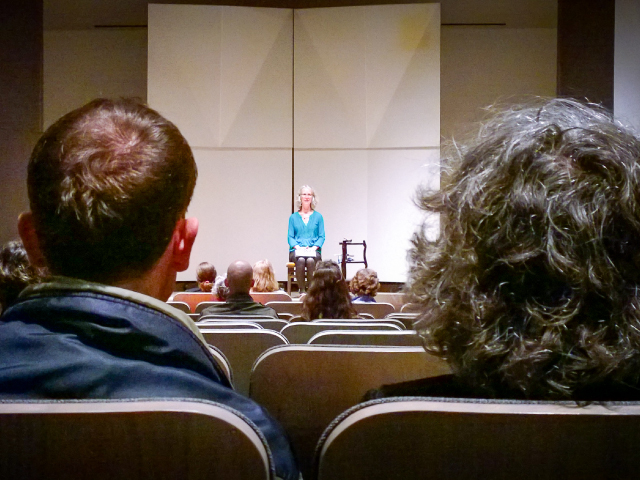 Diane Hetrick and Carolyn McManus’ Wednesday sit in the Frye Museum, on the edge of downtown Seattle, offers an oasis of mindfulness.
Photos by: Amy Darling, Heather Ratcliff, Steve Wilhelm.

Even in the midst of downtown Seattle’s rushing noise and congestion, people are increasingly finding ways to engage in deep spiritual practice and meditation.

On Mondays and Wednesdays at 12:30 p.m., two different practice groups regularly sit together.

Below several of us share our urban practice secrets, with an invitation to join us anytime, or create your own. All of these offer relief from Seattle’s urban cacophony, a contemplative pause with others or alone, not necessarily in a particular spiritual tradition. 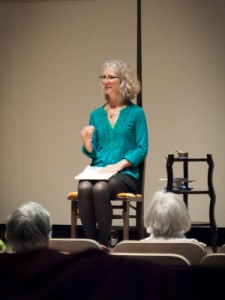 Diane Hetrick makes a point, during the practice period in the Frye Museum auditorium.

At the Seattle’s Frye Museum, just on the eastern edge of Seattle’s downtown core, 50 to 60 people regularly sit during their Wednesday lunch hour.

It can be a surprising sight to see the Frye Museum Auditorium, often the venue for lively presentations and debates, become a silent space supporting so many people practicing meditation together.

While mindfulness meditation has its basis in Buddhist teachings, teachers Diane Hetrick and Carolyn McManus present the meditation practices in a way that is easily accessible to Buddhists and non-Buddhists.

Here’s what a few participants had to say after a recent session:

“Meditation at the Frye has been my weekly ritual for almost three years,” said Sarah, a University of Washington employee. “It allows me to step away from my work, my life, and to just be, without any internal time constraints or criticisms or to-do lists.”

And Christine has this to say: “Thanks to this program, my thinking is more expansive.  I am finding times of peace. For this gift I am truly grateful.”

During one recent session Hetrick perched on a stool on the auditorium stage, gently leading those there away from the busy work lives they had just left, toward being aware in the moment. Without any mention of Buddhism at all, she encouraged them to be aware of their bodies, the movement of their breathing, their thoughts. 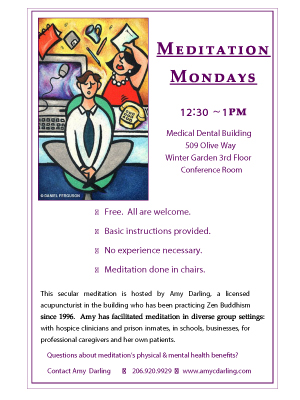 On Mondays, Amy Darling’s downtown sit offers many a mindful beginning to the week.

As she spoke the room settled down, and a quiet stillness became almost palpable. Soon she was quiet, and people continued practicing on their own, but together.

Hetrick and McManus are both physical therapists from Swedish Medical Center, Seattle’s largest hospital system. Both of them trained in Mindfulness Based Stress Reduction (MBSR), a non-Buddhist version of mindfulness meditation practice created by Dr. Jon Kabat-Zinn at the University of Massachusetts Medical Center in 1979.

Since then the practice has become a national movement, and Hetrick and McManus have had extensive training in mindfulness, as well as compassion and loving kindness practices.

Hetrick describes these as teachings as “cultivation practices that help us to open and soften the heart, help us remember our interconnection with others, and even help us to more actively respond to the suffering of others, as well as to our own suffering.”

Beginning in 2010, Swedish partnered with the Frye Art Museum to offer weekly Mindfulness Meditation every Wednesday from 12:30-1pm.

Swedish began offering MBSR classes at their First Hill campus in 1998 and continues to do so throughout the year. The Frye Mindfulness Meditation grew out of that program as a gesture of community service. 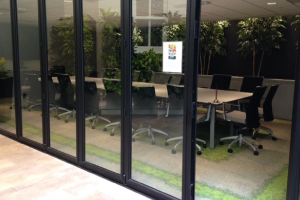 The third-floor meeting room of the Medical Dental building becomes a meditation sanctuary, just for 30 minutes.

A smaller and more intimate Monday group, in a Seattle office building, has been gradually growing since it started in 2010.

The group, which meets at 12:30 to 1 p.m., in the third-floor conference room of Seattle’s historic Medical Dental Building, is intended to meet the needs of anyone who wants to meditate, regardless of whether they’re Buddhist or not. The building on Olive Street at Sixth Avenue.

Founder Amy Darling, herself a long-time Zen practitioner, said she found inspiration for the sit’s broader approach in the teachings of her teacher Shodo Harada Roshi.

“Inspired by my own teacher, I consider it a responsibility to manifest living zazen, as is appropriate to the circumstances of the moment, in the world,” she said. “Every Monday that means a simple, secular invitation for people to be attentively with the breath in stillness.”

Darling also is an acupuncturist, who practices in the building.

People arrive at the third-floor natural light-filled conference room to share silence. They are invited to remove their shoes at the door, thereby encouraging them to temporarily lay down the project or meeting or turmoil occupying the mind. Darling provides basic instruction, particularly for newcomers.

Even though the participants sit for only 30 minutes, this can have a deep impact on their daily lives.

“Working with the public all day every day is stressful,” said Peter S., front office manager for the nearby Roosevelt Hotel. “Spending 30 minutes just focusing on myself, allows me to center myself and perform my job at a higher level.”

This question of stress arises for many people needing acupuncture, or who attend the sit, Darling said. 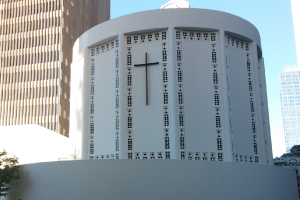 The most central downtown church is Plymouth Congregational, where the sanctuary is spacious and still, despite the hubbub outside.

“Stress plays such a profound role in degrading health and contributing to the conditions for which people come for treatment,” She said. “And yet after their initial health concerns are resolved, they will inevitably encounter adversity again; another injury or health condition, loss, trauma, the sufferings of this human life. Meditation is the most valuable tool I know in shaping how someone experiences and responds to adversity.”

Janet S., who works at a public defense agency, said the Monday sit can be a perfect way to start the work week.

“Monday meditation downtown with Amy is a small space I take for myself, to orient toward a preferable path for the week,” said Janet S. “Stepping out of what often feels like chaos and noise in Seattle, I find a quieter place inside, and I work and live in less tension throughout the week.  This time also inspires me to maintain more daily meditation.”

Some people who can’t attend due to scheduling conflicts simply plug the time into their phone or calendar, so they get pinged at 12:30. Then they can pause, regardless of whether or not they can leave their work environment

Thirty minutes, or a single ping, in the midst of a workday, may seem like a rather humble gesture toward quieting the mind. But some participants noted that the pinged moment of pause alone is invaluable.

Meditation changes one’s relationship to time and experience of it. Time becomes more spacious, more malleable in the midst of Seattle’s urban frenzy. Additionally, one’s focus and concentration are clarified – allowing one to greet whatever is at hand in life.

Solo practice in the city

Sitting with a group can provide invaluable support particularly when beginning meditation. However, there are also ample opportunities for solitude and quiet refuge throughout the downtown core if one knows where to look. 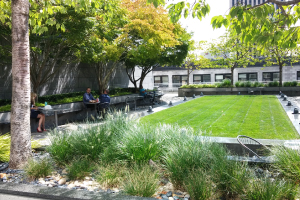 The 7th floor garden at Seattle’s 3rd & Madison building is a lovely place to practice year around. It even includes alcoves with protection from winter rain.

Churches are generally the quietest places to meditate in an urban environment, and in downtown Seattle one of the most conducive is the Plymouth Congregational Church on 6th Avenue and University Street.

The staff is friendly and accommodating, and happy to unlock the main sanctuary for someone wanting to practice during the noon hour. (This fall the church is replacing the pipe organ, but once that work is done, the sanctuary will be available again.)

A good thing to do, if you practice at this or any church, is to make an occasional cash offering, even once or twice a year. There’s a way that that small spontaneous generosity shifts things for a church staff, and helps them see that your practice is a giving, and you’re not just asking.

Other good places for practice in downtown Seattle are skyscraper gardens. Many of the newer high-rise buildings have gardens, and by city law most of the newer ones are open to the public.

The favorite of one friend is the garden at the 4th & Madison building, in the heart of the downtown financial district.

Reachable only from a bank of elevators on the right from the Third Avenue entrance, the seventh-floor garden is an oasis, with a small raised lawn encircled by some quite large trees. The site includes chairs and tables, and the chairs are good for sitting, and stay out there all year.

In the summer the garden is quite popular with people meeting and talking, but it’s easy to find some niches away from people to sit. In the winter nobody is there, and there are a few overhangs where a person can take one of the chairs to sit, and be protected from the rain.

How might our city function differently if space for contemplative pause was more a part of our culture? Imagine what would happen if once a week, even for five minutes, the whole city paused?

What if everyone typing at a keyboard let their hands and eyes soften. What if this spread to everyone doing construction, or throwing fish in the market, or serving meals or pulling espresso? Everyone would be a teacher, everyone a student.

Will you step forward in your own individual way to be a part of this cultural movement? Consider this an invitation.

0
SHARES
Share
Posted Under: 2014, Compassionate Action, Fall
About the Author: Amy Darling and Diane Hetrick
Amy Darling first studied with Zoketsu Norman Fischer in the Soto Zen Tradition, and since 2000 has been a student of Shodo Harada Roshi, training regularly at Tahoma One Drop Zen Monastery on Whidbey Island, where she received lay ordination in 2010. She is an acupuncturist, herbalist and health educator practicing in downtown Seattle, and has volunteered at the state prison complex in Monroe, Wash., since 2006.

Diane Hetrick, PT, has been studying and practicing in the areas of mind-body healing, mindfulness, meditation and compassion cultivation for many years. She completed the Certificate in Mindfulness Facilitation training through UCLA, and the Compassion Cultivation Training (CCT) program at Stanford University, and is a certified CCT instructor. She currently works at Swedish First Hill, offering individual treatment to patients dealing with chronic pain and stress related illnesses, and offering classes in Mindfulness Based Stress Reduction and Compassion Cultivation Training.