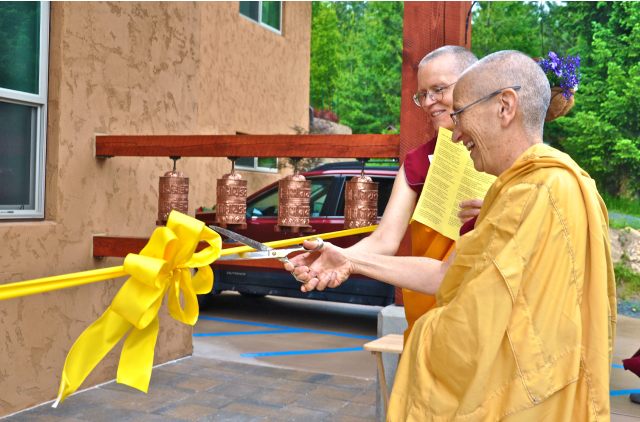 Sravasti Abbey’s new Chenrezig Hall, the accomplishment of a long endeavor, will expand the monastery’s offerings to a growing circle of people.

In June about 80 people gathered at the abbey, near Newport, Washington, to consecrate the new building.

Guests included friends and supporters from throughout the region, the architect, and a contingent of 15 Singaporeans who joined the abbey’s 10 resident monastics to officially open the multi-function facility.

Chenrezig Hall relieves a space shortage at the monastery that had become more acute as its dharma programs became more popular.

Participation in Sravasti Abbey’s dharma programs has steadily increased over the last 10 years with about 1,000 annual guest visits, and the resident community also continues to expand.

Because of this, the abbey’s dining facilities, guest accommodations, and administrative space had become insufficient.

At just under 10,000 square feet, Chenrezig Hall serves many functions that support the abbey’s dharma programs. A large dining room seats at least 90 people, supported by a new commercial kitchen. There are two wings of guest rooms, one for men and one for women. The building also features a small chapel, a workroom, a dharma classroom, a media room, and the resident library, along with lots of storage space. 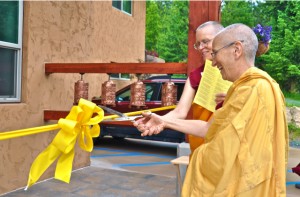 “I’m excited about what this building allows us to do,” she said. “Chenrezig Hall is a resource for sharing the dharma.”

But the beneficial intention of Chenrezig hall is larger than just a building, said Ven. Thubten Chodron, founder and abbess of Sravasti Abbey.

“We can have all the buildings in the world, but it’s the actual practice of compassion that will make a difference to individuals and to our world, both now and in the future. We have a slogan that sums up our mission, ‘creating peace in a chaotic world,’” she said. “Chenrezig Hall will allow us—residents and friends—to do this long after everybody here is gone. That’s our aspiration: That everyone who seeks the dharma here will grow in compassion and wisdom.”

Chenrezig is the Tibetan language name for the Buddha of compassion, also known as Avalokiteshvara in Sanskrit, and Kuan Yin in Chinese.

The new building serves as the welcoming center and hub of community activity, thus supporting the abbey’s mission to help cultivate peace in residents, visitors, and in the world.

A seven-foot cypress-wood carving of Kuan Yin sits prominently in the entryway.

“We thought it would be wonderful to welcome everybody with compassion as they come to Sravasti Abbey,” Chodron said. 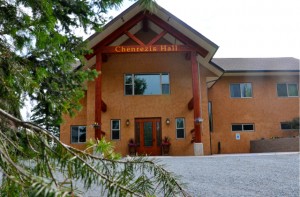 This summer’s consecration was the culmination of a long-term project first conceived in 2005.

Construction took 15 months—from August 2012 to November 2013— and furnishing and landscaping details continued into 2014.

The consecration celebration included consecration prayers, a chanting procession throughout the building, ribbon-cutting, and extemporaneous endorsements by monastery residents, donors, and the building team.

For architect Tim Wilson, helping to establish a Buddhist monastery in the Inland Northwest is “a project of a lifetime.” Wilson designed Gotami House, the nuns’ residence completed in 2009, and looks forward to designing a temple, the next project, when conditions come together.

In keeping with Sravasti Abbey’s values of simplicity and environmental stewardship, Chenrezig Hall is constructed of Faswall, a “green building” material that uses insulated wood chip-cement blocks to create a well-insulated, sturdy structure that is both fire and pest-resistant.

Faswall manufacturer Paul Wood attended the consecration and said, “It’s important to me and my company that our work is beneficial to the planet. Clearly, when Faswall is used to construct a building dedicated to compassion, we fulfill that goal. That’s very gratifying.”

For carpenter Larry Kulesza, the abbey became a second home during construction.

Kulesza spent most of the year on the project and applied his artisan skills to install eight prayer wheels, and to create beautiful platform stands for two of the Kuan Yin statues.

“I got to do the fun projects,” he said, “After a while, working on this building was like a spiritual retreat for me.”

Four families came to the consecration ceremony as representatives of Friends of Sravasti Abbey-Singapore. This is a network of Singaporean supporters who host Ven. Chodron’s teachings in their country, and who coordinate support for the monastery.

The Singapore group offered a moving video tribute to the power of compassion: The dharma band Bodhichitta singing Jennifer Berezan’s anthem to Kuan Yin “She Carries Me, “which finished the consecration program on a tearfully joyful note.

The celebration day then culminated with a magnificent potluck feast, in the new Chenrezig Hall.

Long-time abbey friends marveled at the spaciousness of the new dining room, as they recalled earlier times when 24 people could barely fit into the former dining area.

In addition to the Chenrezig statue in the entry, the temple is rich with other images of the Buddha of compassion. 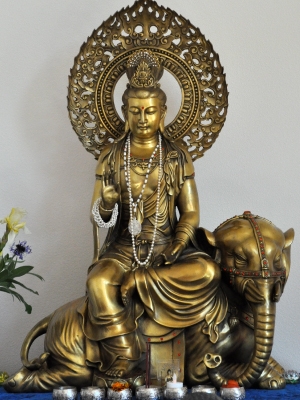 This Kuan Yin in the aspect of Samantabhadra came from China and is a beautiful presence in the Kuan Yin Room.

A Tibetan 1,000-armed Chenrezig statue rests on the chapel altar, and a Chenrezig painting hangs in the lobby.

“I’ve never seen so many Chenrezig images in a single building!” said one guest.

“Kindness and merit built Chenrezig Hall,” Ven. Chodron said. “Before we began construction, we invited people from all over the word to help us generate merit by reciting Chenrezig’s mantra – om mani padme hum – and cultivating compassion.

“Over 200 people joined in to accumulate 21 million recitations of the mantra,” she continued, “and many hundreds of people contributed the funds to build Chenrezig Hall.”

The $2.3 million building was paid for completely by donations, and by abbey savings accumulated from past generosity.

“Throughout the process, I was struck with the interdependence of the many aspects of the building process,” said Thubten Tarpa. “And it requires that everybody focus on kindness. When we started this project we did prayers and a ceremony on the site where we visualized a giant Chenrezig—as large as the building—with his thousand arms reaching out to everyone. With all the different crews, I sometimes had the idea that they represented all of Chenrezig’s arms working together to create the building.”

Sravasti Abbey programs continued without interruption throughout the construction period, and the community and guests have made a smooth transition into using the new building.

Guests are welcome to visit Sravasti Abbey for courses and retreats or simply to live and practice with the community. With the completion of Chenrezig Hall, there’s plenty of room!

Please look on our website or write us at office.sravasti@gmail.com, for information.

0
SHARES
Share
Posted Under: 2014, Dharma Healing, Arts, Fall
About the Author: Ven. Thubten Chonyi
Ven. Thubten Chonyi is a fully ordained nun practicing in the Tibetan tradition, who lives and trains at Sravasti Abbey in Newport, Washington. She also serves on the Northwest Dharma Association board of directors.