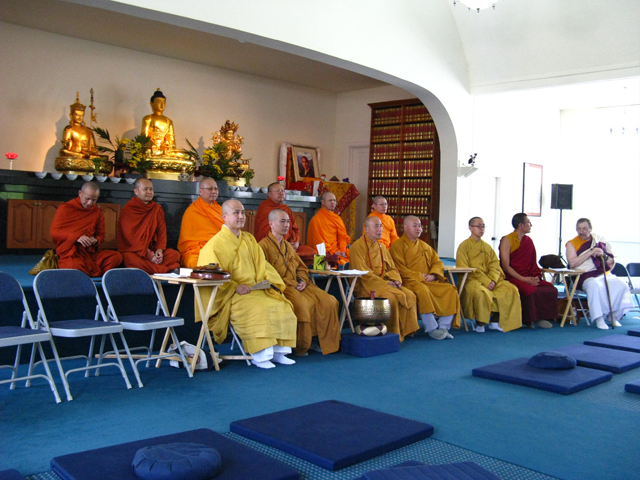 Monks seated in the main shrine room at Nalanda West, before the ceremony started.
Photos by: Joe Romero

Monastics of many traditions from around the Seattle area gathered May 14 to celebrate the Buddha’s birthday and his enlightenment, a traditional Buddhist holiday called Vesak. 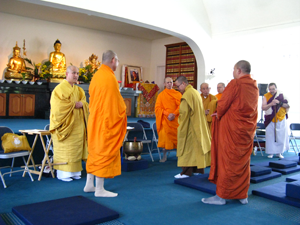 Seattle  Koyasan Buddhist Temple attended the celebration for the first time this year, and Rev.  Imanaka Taijo expressed his gratitude for the opportunity to participate.  His chanting in Japanese added a different color to the sounds that filled the meditation hall.

The ceremony was held in Nalanda West’s beautiful meditation hall, which is highlighted by a golden statue of the Buddha. It was a wonderful setting to celebrate the Buddha’s birthday. 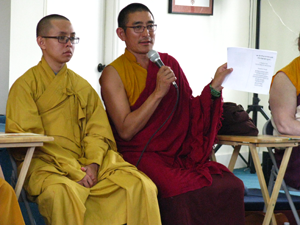 At the beginning of this year’s ceremony the monks slowly arrived, each wearing robes of their tradition, a colorful representation of the different traditions attending.

As they were seated, their saffron, orange, red, and yellow-colored robes was the first indication of this being a “mahasangha” celebration of Vesak, meaning the “greater sangha, or community of Buddhist practitioners.”

As the ceremony started many of the monks greeted each other, happy to see old friends, as they discussed where to sit and what was scheduled. 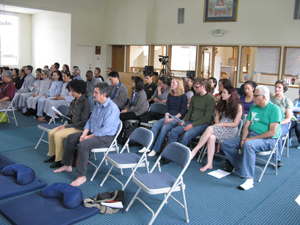 A large audience gathered for the Vesak celebration.

Seats were added to accommodate more monks as they arrived. Some more arrangements were necessary, and finally all 13 monks were seated in groups according to their tradition.
After about 50 non-monastics were also seated, Tim Tapping, president of Northwest Dharma Association, introduced the monks, and gave a brief outline of the celebration.

The celebration started with chanting, each monastic chanting in their own tradition.  It was very interesting to hear the differences in chanting, as each praised the Buddha in their own way. 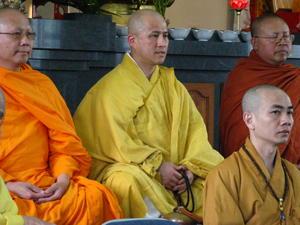 Monks during the service.

The celebration ended with a short meditation lead by Ven. Tulku Yeshe Gyatso of the Sakya Monastery.  Afterward many group photos were taken, to make sure everyone would have a photo record of this wonderful Vesak celebration.

Chairs were put away, and the meditation hall returned to its original condition.

People still mingled around for a short time in conversation, and slowly left with only a memory of this beautiful celebration of the Buddha’s birthday, enriched by the sights and sounds.

0
SHARES
Share
Posted Under: 2014, NWDA News, Summer
About the Author: Joseph Romero
Joseph Romero has practiced in several traditions, but currently primarily focuses on the Theravada tradition as practiced by the forest monks of Thailand. The Woodinville Buddhist Monastery (Wat Atammayatarama) is his primary sangha, where he’s very active in meditation, and serves on various committees and on the board of directors.