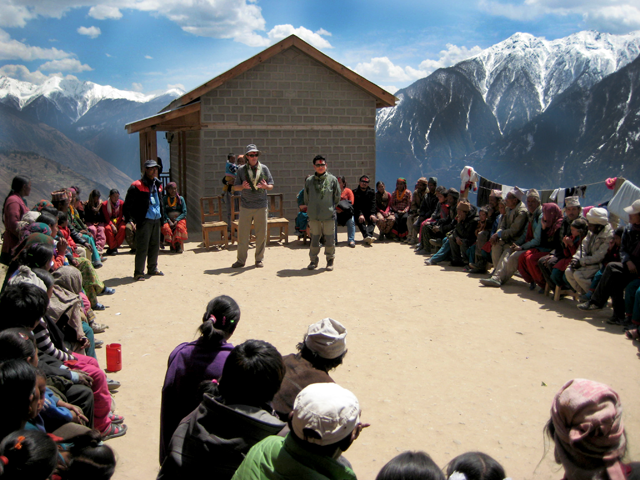 Fifty girls are getting an education that will make a difference in their lives and that of their village, at the Karnali Girls Academy in Simikot, Nepal.

The academy is a relatively new organization that Seattle-area Buddhist practitioners are helping to develop.

Supported by the Namaste Children’s Fund, the girls-only school is unique in its region, including students of different castes, and religions, who peacefully live, learn and play together. From this beginning, we believe as the girls become adults, they will be prepared and empowered to make positive changes in their community together.

In 2012 we completed construction of a new school building and living quarters in Simikot, to support girls from the Thehe village. At the new site the girls will be able to partly support themselves, using a vegetable garden and greenhouse we are developing.

For three years before that, the school operated from a rented house.

The students come from poor villages high in the Himalayas.  At first glance, the students appear much the same, but even in the face of common hardship and struggle, there is caste distinction and inequality.

The girls are inspiring, intelligent and highly motivated.  We deeply believe in empowering individuals in their own society to improve socioeconomic conditions, and we also believe that girls, who will become women leaders, have the power to transform rural economies.

Now we are accepting another 30 girls from surrounding villages, and we need sponsors to support these young women, as they endeavor to help themselves.

But first, let’s back up. How did we get into this in the first place?

For me, it started when I found SIMS (Seattle Insight Meditation Society) in 2001.  I was recently divorced and looking for a way to bring greater clarity and meaning to my life. 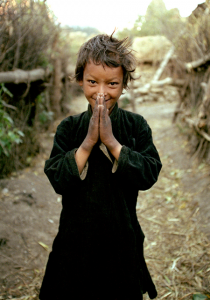 The photo that started this odyssey for Phil Crean and Cora Edmonds. It’s called Namaste Boy, and is a photo of Gyeni Bohara in 2000 about 6 years old, in Simikot, Nepal.

The teachings of the dharma and the support of the SIMS community gave a more stable foundation to my life and opened me to being more generous and caring.  This was also the year that I came across a photograph that caught my attention.

The photo was of a young child in a village.  I purchased this photo online, and when I went to pick it up from the photographer, Cora Edmonds, I was instantly captured by her story of the child.  One thing led to another and we soon began attending SIMS together, and in 2006 we were married.

Knowing that this child was the reason the two of us were together, we in 2007 decided to travel to Humla, one of the poorest districts of Nepal, and see if we could find him.

After trekking through remote villages for several days we stumbled across a teacher who recognized the child and connected us with his village.  The child in the photo, a boy named Gyeni, was about 13 and he still had the same eyes that captured our hearts. But his life had not been easy.

Since Cora’s first encounter in 2000, his father had died and Gyeni was now working in the fields more than he was attending the local, and badly run, government school. He was also undernourished, as a majority of the children were in his home village of Thehe.

We wanted to give back something to this boy, but didn’t quite know what that might be. After long conversations with the village elders and his mother, we agreed to help Gyeni finish school. It brought us great joy to help with Gyeni’s life, yet this action alone seemed rather small, given the tremendous poverty that surrounded us.

Both Cora and I had been following the research on the importance of educating girls, and nowhere was this more apparent than in Humla. 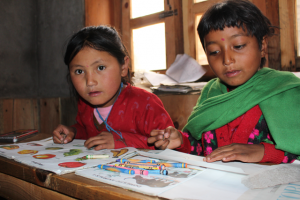 It is not uncommon there for girls as young as 10 years old to be married. And during the recent Maoist insurgence, trafficking of girls into urban cities was rampant, due to villagers’ vulnerability, caused by their isolation and poverty.

Knowing these troubling realities made our decision easy. We would build and fund a school for girls.

At first the village elders resisted, partly because we didn’t intend to include boys, and partly because we intended to educate one girl per family regardless of caste.  Rarely had girls from the Hindu Dalit (“untouchable”) caste shared living quarters and classrooms with children of other castes.

Yet, with the assistance from a number of progressive villagers we set out to build a school for girls. We also launched the Namaste Children’s Fund, which was intended to bring together donors from the Pacific Northwest to support the girls’ long-term education. 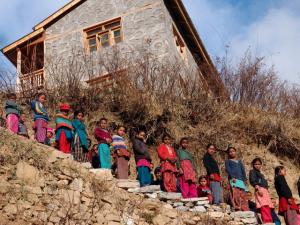 Our students line up to welcome us to the school and living quarters, Simikot, Nepal, 2013.

Climbing to Simikot to visit the girls

Fast forward to late March, 2014.  The winter snow and cold had receded, allowing me to visit Simikot with my teenage daughter and two friends.

Cora (my spouse) and I take turns visiting annually. It’s emotional to walk slowly from the small airstrip, up the winding tracks through the Simikot village, and then to our school.

Regardless of the shock of being at over 9,000 feet altitude after the heat of the lowlands, I can sense my anticipation at the prospect of seeing the girls.  It feels like we have this huge family of daughters, and what a blessing that is.

They line the steps of the path outside the living quarters in welcome, and their eyes and smiles say it all: A chance for a future, a chance to be leaders in their community, a chance to be children.

What the girls don’t yet fully understand is that they are also pioneers in their community.

We have specifically chosen only one girl from each family, and the school includes a wide range of castes and religious backgrounds from various villages.

The kids from Buddhist backgrounds and Tibetan heritage are combined with Hindu kids from the Chhetri and Dalit castes, originating from India. 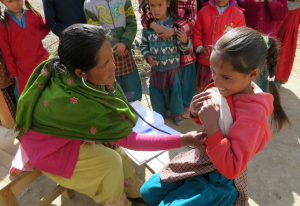 A student getting her monthly health checkup.

Back home the Tibetan kids don’t visit with or marry into the Chhetri or Dalit castes from adjoining villages.  In our girls school they are all treated equally, and happily mingle together.

As we spend a week at the school, and visit  the villages where our students were born, and meet their parents, it is inspiring to witness the life-changing impact of educating girls.

They are very diligent and motivated in the classroom, and yet fun-loving and playful during leisure time.  Their superior health and well-being compared to their “sisters” in the villages, who aren’t receiving the same education and three hot, nourishing meals a day, is obvious.

Most importantly, the girls work together as one. While their family names indicate what caste they come from, nothing in the daily school routine separates them from one another.

Further, we host a family day at the school, which brings parents and siblings to visit.  While each family and village group tends to stick together, there is a slow dismantling of the barriers between them, as they enjoy watching the girls perform songs and dance.

It is too early in the process to reach strong conclusions.  Our school has been open only since 2009 and we are six to eight years away from having the oldest students graduate and move back to their villages to live and work.

It is through skilled, educated women and mothers transitioning back to village life that permanent changes will arise to benefit the wider community.  However, even before that, some strong norms of equality and teamwork are being built. 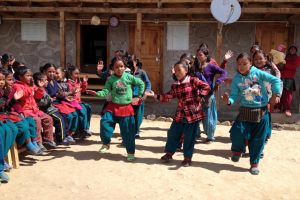 Students perform a welcome dance ceremony for visitors from the United States.

Watching my daughter have her hair combed by one of the older girls from a Dalit caste, with the surrounding chatter and laughter, one can forget that what seems so normal is really a pioneering feat that should be honored by all.

The fund supports the school and its dormitories, employing over 15 to manage the operation, teach the students and provide food and support.

The fund is supported by many generous donors, including members of the Seattle Insight Meditation Society who have provided support in many ways. These have included a drive to give educational CDs for the school, and a “Change for Change” promotion raising money for art supplies.

It costs $1,000 a year to support a student in a remote region of Nepal. We need sponsors, and 100 percent of contributions will be used for project expenses directly for the students.

All overhead and administrative costs are paid by Phil Crean and Cora Edmonds as part of their financial commitment to the fund.

Come join the Namaste Circle with us!

0
SHARES
Share
Posted Under: 2014, Compassionate Action, Summer
About the Author: Phil Crean
Phil Crean is the father of five children, husband of Cora Edmonds, and co-founder of the Namaste Children’s Fund. He is also a past president of Seattle Insight Meditation Society.

Credits: A big thank you to Sandy Clark, Chris Shaw, Andrew Erickson and Cora Edmonds for help with writing and editing this article.