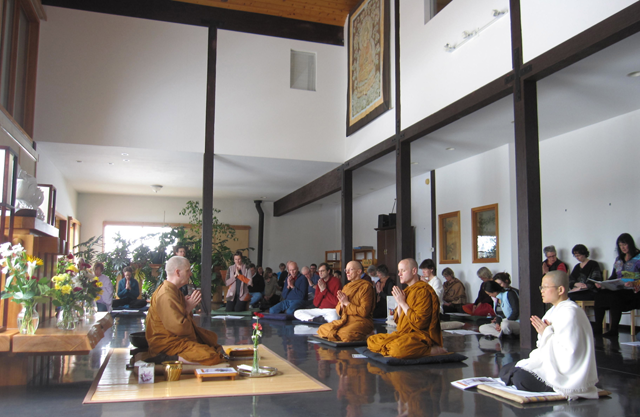 (Editor’s note: More than a year ago Ajahn Sona, abbot of Birken Forest Monastery (‘Sitavana’) in British Columbia, Canada, entered a year-long solitary retreat. At that time we ran a question-and-answer interview with Ajahn Sona about his then-coming retreat, a piece that is attached here. 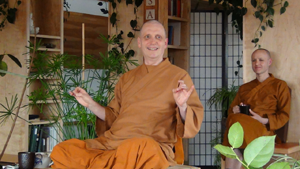 After a year of practice he emerged from retreat in April, celebrating his 60th birthday and 25 years in robes. The piece below is his own words about his experience, and about what he learned.

Ajahn Sona conducted his year of meditation in a small retreat hut next to Birken Forest Monastery, which is near Kamloops, B.C. Ajahn Sona and other monastics moved to this site in 2001, after starting their monastic life in 1994, in what he calls “a primitive shack monastery” in Pemberton, B.C.)

Last year, on April 5, I entered a year of solitary retreat on my 59th birthday.  After a lovely teatime with supporters and well-wishers, and various traditional blessing chants from groups of monks, I walked with a joyful heart down the gravel path to my cabin.

And so began a year of quiet that flew by like an arrow.  That very first evening I sat in front of a large window looking out at the grey sky, the snow-patched ground and solemn spruce trees that were to be my companions, and felt like I was returning home.

Home, for one such as me, is the hermit’s life.  Intermittently over the last 30 years, I have alternated between monastic community life and seclusion.  Both ways are rich, sometimes challenging, sometimes inexpressibly fine. 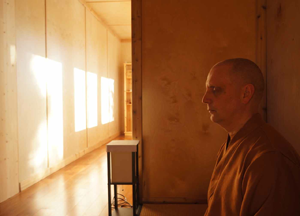 Ajahn Sona meditating in his kuti.

Solitude yields certain experiences that cannot be obtained in the company of others.  I was not stranded on a deserted island (although one day I really must try that), but my occasional excursions for my one meal of the day, or to deal with a few human interactions, were certainly not distracting.  Mostly it was just me and the sky and the trees and numerous wild animals. 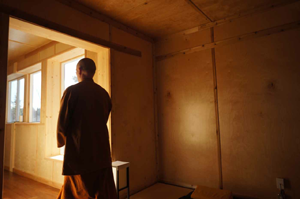 Solitude is a strange condition that humans generally do not prefer, as we are social creatures.  But having got the hang of using it skillfully over the years, I have come to see its benefits.

To really reduce the inflow of the human world allows new ways of seeing to arise.  Sometimes one has to wait patiently for days, weeks or even months for the mind to be still and lucid enough to feel the rarer modes of being.

What is it that is worth it, you ask? 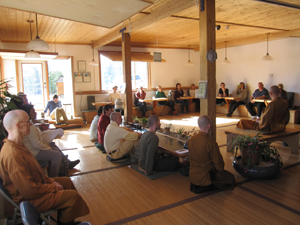 Friends gather to welcome Ajahn Sona back from retreat and wish him a happy 60th birthday.

My year was unlike my community years; it was faster, and it was fresher.  “Fresh” is the only word that comes close to what the little neurons in my mind seem to have become.  And at 60, fresh is good.

During my year apart I walked back and forth on my newly completed indoor walking path.  I walked to Mexico…well, as far as Mexico, about 2,000 miles.

During this journey I wore out a very thick pair of Austrian felt slippers. And I wore out some attachments as well. 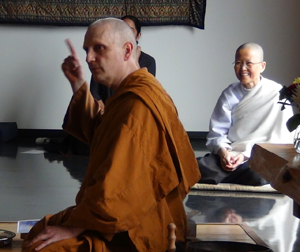 Ajahn Sona expressing gratitude for all those who supported his retreat.

I did not exclusively meditate; I also imbibed substantial parts of the Pali canon, the original teachings of the Buddha. In particular I read the new translation of the Numerical Discourses of the Buddha, traditionally known as the Anguttara Nikaya. What a delight it was to sit by the window in the morning, in the deep silence and the early spring light, and sip at the 1,900 pages.

I shall conclude this brief article with a dream I had a week before the retreat ended.  I had apparently rented a motorcycle for a day and it was now late afternoon and time to return it.  I felt reluctant as it had been such a playful experience. 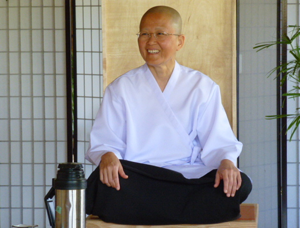 There were other motorcyclists around who seemed to sympathize and said, “Why do you have to take it back?” to which I replied “I need a car to take myself and a few others to school.” Then they said, “why not buy both?” to which I replied “I don’t think I can afford it”.  Then I realized I did not know where the rental agency was.

I awoke, recorded the dream and analyzed it.  I had been reading a book on encounters with Chinese hermits before I had gone to sleep. 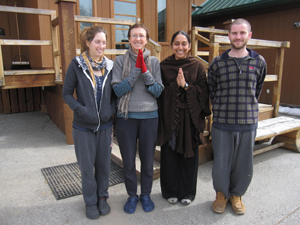 A few of the resident stewards who took care of Birken Forest Monastery during Ajahn Sona’s retreat.

These hermits were my fellow motorcycle riders.  The car is the community vehicle, the monastery and its various teaching and learning…thus driving to school with passengers.

Could I afford both the motorcycle and the car?

I could not remember where the motorcycle rental agency was…All was left open.

0
SHARES
Share
Posted Under: 2014, Dharma In Canada, Summer
About the Author: Ajahn Sona
Ajahn Sona’s encounter with Buddhist teachings as a young man initiated a spiritual journey which led him to renounce his worldly life as a classical musician to become a lay hermit for several years. In 1988 he ordained as a Theravada monk under Ven. Bhante Gunaratana at Bhavana Society in West Virginia. He later trained in the Thai Forest tradition and practiced for more than three years at Ajahn Chah’s forest monasteries in northeastern Thailand, particularly Wat Pah Nanachat.