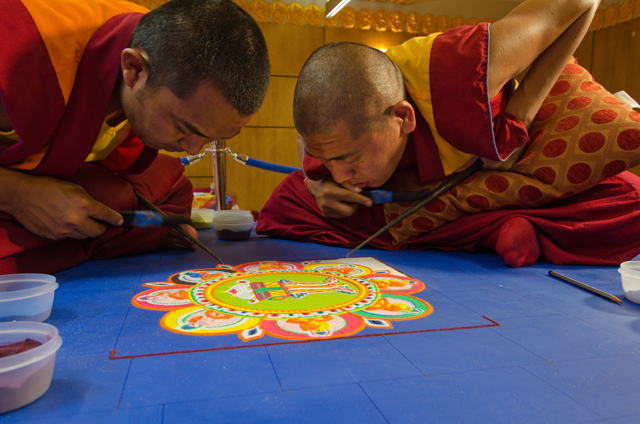 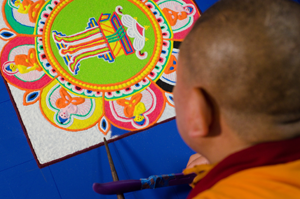 The intricate designs are filled in with grains of colored sand.

The Portland-based Buddhist studies college also launched a short documentary film encapsulating highlights from the Dalai Lama’s visit to Portland, and his message of engagement with environmental and other concerns of our day.

The sand mandala was created in May by a group of four monks from Sera Mey Monastery in India, to create a Medicine Buddha Sand Mandala for healing and peace.

The traditional Tibetan Buddhist art form has rarely been performed in Portland. The monks came from Kongpo Khamtsen House at the monastery.

Monks build a mandala by meticulously arranging millions of grains of colored sand in a traditional iconography of sacred symbols. Constructing a mandala is a method of generating peace, healing, and blessing for our earth, its inhabitants, and viewers of the mandala. 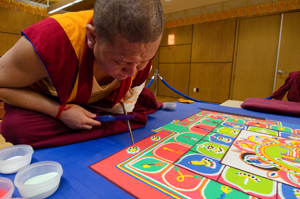 The outer boundaries of the sand mandala take shape.

The monks began by drawing an outline and chanting prayers at an opening ceremony. After morning prayers each day, they spent hours meditatively drawing with thin flowing lines of colored sand. The sand was trickled through a metal funnel, with the rate of sand controlled by vibrations from metal rods they rubbed against the funnels.

After five days, working almost 10 hours a day, they completed the mandala on May 10, the very anniversary of the Life After Life Symposium with His Holiness the Dalai Lama, which he had conducted in the same meditation hall. 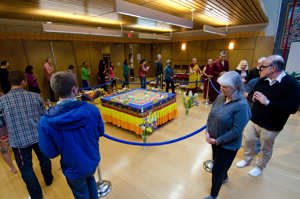 While the monks created the mandala, they were daily visited by school groups, pets, and dozens of people. Many of the visitors participated in ritual chanting for healing, and dedicated the energies of the mandala creation to the well-being of the more-than 200 beings whose names had been submitted to the Maitripa College Prayer List that week.

In a closing ceremony the monks, led by Yangsi Rinpoche as the ritual master, swept up the sand as a reminder of impermanence.

The blessed sand was distributed to those in attendance, and the blessings were thereby carried into the wider environment.

In addition, an introduction to Tibetan medicine was offered to people there by Dr. Tsering Lhamo. She is the first traditionally-trained Tibetan doctor to also obtain a medical degree in the United States. 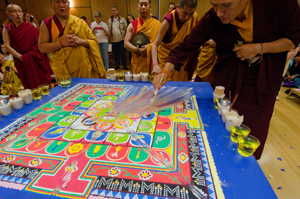 The sand mandala is ritually swept away, representing impermanence.

Venerable Lama Thubten Zopa Rinpoche is the spiritual director of the Foundation for the Preservation of the Mahayana Tradition, a worldwide organization, headquartered in Portland, which is also called FPMT.

The Vajrasattva initiation gave those attending permission and empowerment to practice the mediation and mantra of Vajrasattva.

Lama Zopa Rinpoche spent several hours in solitary preparation before more than 200 participants were admitted to the Jokhang Meditation Hall, where they received teaching and instruction and ritual until nearly midnight. 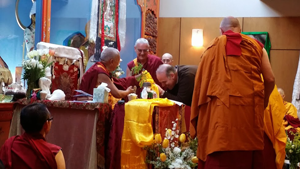 Professor Jim Blumenthal offers the body, speech and mind mandala offering to Lama Zopa Rinpoche, in thanks for the teachings.

The practice of Vajrasattva is associated with the purification of negative karma through the process of confession and regret for previous harmful behaviors of body, speech and mind. It also includes reflecting upon the virtuous qualities of enlightened beings and relying on their inspiration and guidance, engaging in practice as an antidote to negative behavior, and cultivating a resolve to not commit those actions in the future.

To give the oral transmission in a traditional way, Rinpoche read the text aloud to the students. This introduced students to the practice of Dorje Khadro, which is particularly associated with purifying transgressed vows, and creating conducive conditions for overcoming obstacles to practice. 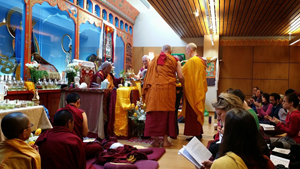 The big surprise was Kyabje Lama Zopa Rinpoche’s announcement that he would offer a long life empowerment. This was especially wonderful because it fell on the birthday of Yangsi Rinpoche, the spiritual director of Maitripa College.

From the students’ side, it is very auspicious to make wishes for all of one’s precious teachers to have long lives. Regarding one’s own life, the practitioner aspires to not merely to have a long life, but to use one’s life meaningfully, having conditions for purification and practice.

Receiving long life empowerment is a powerful and beneficial blessing, and this one included singing ‘Happy Birthday’ and eating cake! 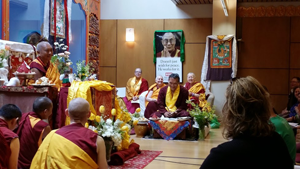 Yangsi Rinpoche smiles as students begin to sing “Happy Birthday” and a huge cake with candles is brought into the room, as Lama Zopa Rinpoche smiles, too.

Lama Zopa Rinpoche was born in 1946 in Thami, in the Mount Everest region of Nepal, not far from the Lawudo cave where his predecessor had meditated for the last 20 years of his life. Lama Zopa Rinpoche is now the spiritual director of the Foundation for the Preservation of the Mahayana Tradition.

At the other end of the spectrum from traditional religious and cultural activities, Maitripa also commemorated the anniversary of the Dalai Lama’s visit with the promotion of a short documentary co-produced by Optic Nerve Productions and Maitripa.

“Seven Billion Brothers and Sisters: The Dalai Lama’s Hope for the Planet,” features exclusive interviews with His Holiness the Dalai Lama, and environmental activist and scientist David Suzuki, who also presented at the Dalai Lama Environmental Summit. 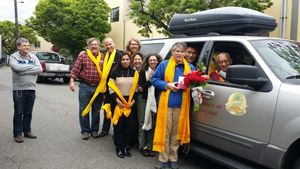 The film captures the energy of the Dalai Lama Environmental Summit to inspire people to  increase their knowledge of environmental challenges, while also sustaining hope and determination to act, and never losing sight of our common humanity and the power of laughter and smiles.

0
SHARES
Share
Posted Under: 2014, Dharma Healing, Arts, Summer
About the Author: Leigh Miller
Leigh Miller is the director of academic and public programs at Maitripa College. She competed her doctorate at Emory University, with a dissertation on contemporary Tibetan art and cultural sustainability in Lhasa, Tibet.