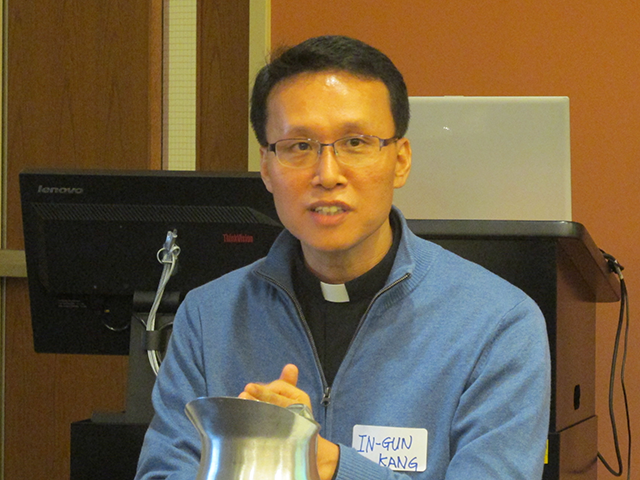 Seattle University is launching a new outreach to the Seattle-area’s Buddhist community, following a gathering of Buddhist leaders at the university in May.

That gathering was a chance to meet Dr. Kang In-gun, a Korean-born Jesuit scholar who also is highly learned in Buddhist studies.

While the two-dozen Asian and Western Buddhist monastic and lay leaders got a chance to hear about Kang’s compassionate work in Cambodia at the May 8 dinner, the event also was a chance to meet with Seattle University leaders, including several professors and deans.

Dr. Michael Trice, a member of the faculty and dean for ecumenical and interreligious dialogue at the Seattle University School of Theology and Ministry, said afterwards that the gathering was “an important moment” for Seattle University’s continued efforts to connect with other parts of the faith community. 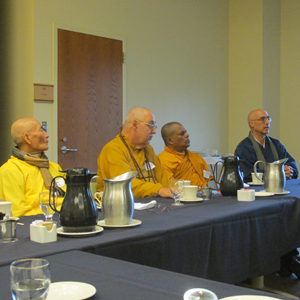 Monastics and teachers among the leaders at the event included Thay Kim, from Seattle’s Co Lam Vietnamese temple; Bhante Dewananda, (third over), a Sri Lankan monk; and Genjo Marinello, a Zen teacher.

While the university has long been a pioneer in forging links among various members of the “Abrahamic Traditions” – Christians, Jews and Muslims – recent efforts at the SU School of Theology and Ministry to connect with Hindus and now Buddhists are a significant new step, he said.

“Our work is to continue to expand ourselves and risk what we think we know by engaging new partners,” he said in an interview a few weeks after the event. “Reaching out to the Buddhist community is a genuinely important step for us.”

He added that the school is partly responding to the changing character of the Seattle University student body, which now includes people interested in Eastern religious traditions, and Asian students who come from Buddhist backgrounds.

Speaking in particular of School of Theology and Ministry, Trice said, “We are training leaders for a religiously pluralistic world, and in that light these relationships are essential to us all.”

The stage for the conversation was in a way set by Kang’s talk, during which he movingly described his work with Cambodian people. By his very kind tone, Kang embodied a compassionate approach that seemed to evoke aspects of Buddhist and Christian thought.

Kang, who is ordained as a Catholic priest, is fluent in Pali and holds a doctorate in Buddhism from Heythorp College in London, in addition to his training at the Jesuit School of Theology in Berkeley. 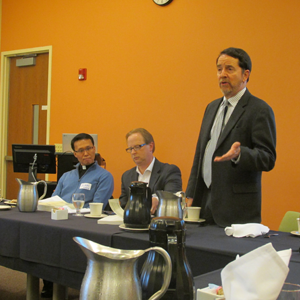 “The interest is that we deepen our awareness of each other, insofar as this rises from the heart of our core religious values,” he said.

In terms of specific goals, Trice said he plans to invite Buddhists to the School’s “Interfaith Harmony Banquet” every February, and to work with the Buddhist community around Earth Day in April.

In addition, he will be inviting two Buddhists to join the school’s quarterly “Interreligious Advisory Council,” to sit in circle with Christians, Jews, Muslims, Hindus and Sikhs. He also hopes to put together a speakers’ bureau, of Buddhists who can address groups within the Seattle University community.

“We’re strengthening our Advisory Council so we can decide together what is in the best interests of us all, for those of us who take faith and spirituality seriously,” he said.

Acknowledging some significant differences between Buddhist and Christian traditions, for instance the non-theistic underpinnings of Buddhism, Trice said he saw no obstacles there to deepening a dialogue and a connection. 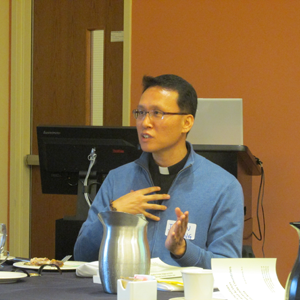 Kang In-gun, who has degrees in Buddhist and Christian studies, makes a point.

“It’s fruitful, it’s a welcome challenge,” he said, adding, “There’s a deep and abiding respect for the level of awareness and experiential depth in the Buddhist community.”

He said that the starting point, as was the case at the May dinner, should be embracing shared values.

“The question for us, at the moment, is not about checking off a list of what we believe or don’t believe together,” he said. ‘We don’t begin that way.”

One of the strengths Trice notices in Buddhist tradition is its contemplative aspect, which he said he saw manifest in the group’s natural subsidence into silence during the dinner.

“Our region and world hungers for a deeper sense of contemplative being,” he said. “I think that’s a shared hunger across the human spectrum and across our communities today.”