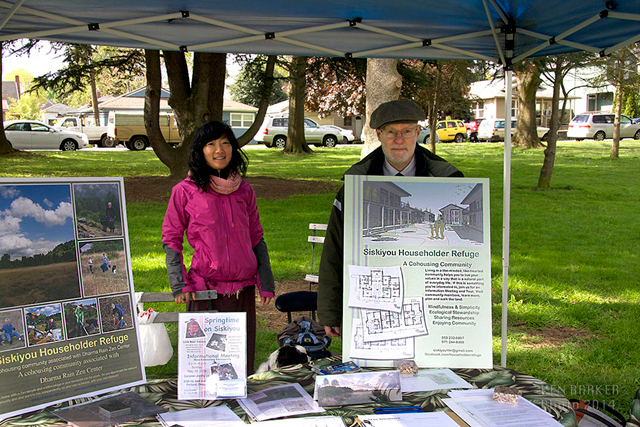 Members of Portland’s Dharma Rain Zen Center are creating a cohousing community of 32 units on their newly purchased temple land, to be a place of refuge and practice.

Site preparations for the Siskiyou Householder Refuge are to start this fall, with construction beginning in early 2015. Over the last 18 months an enormous amount of volunteer effort has been devoted to ecological restoration of the site.

The cohousing community is to take up one third of the 14-acre site, which Dharma Rain Zen Center purchased in 2012 to be its dharma home, after two years of searching. The spiritual center of the site is to be the Sodo, or meditation hall, which will be the first structure completed.

The overall campus integrates diverse elements in a way not seen, so far as we know, in the United States. At its center is an urban temple integrating monastic and lay practice, only five miles from downtown Portland with excellent public transport access.

Within the village that is to be the Householder Refuge, we are looking to regain a peaceful equilibrium in both the quiet and busy moments.  We hope to bring the peaceful pace of connection into our everyday lives through a conscious choice of spiritual practice, much like those moments fleetingly found in retreat.

The idea of an adjacent, affiliated cohousing community wasn’t part of the plan when we were looking for a site, but grew in the minds and dreams of some of the sangha members once the site was identified.  Even before closing on the property, lay members were trying to figure out how to live near the new temple site, wishing to be a part of as much of the daily practice of the temple as possible.

Dharma Rain Zen Center has been around Portland in one form or another since the ‘70s.  Starting as a small sitting group in a rented house (then affiliated with Shasta Abbey), we grew into an independent Soto Zen temple dedicated to lay practice, with a sangha of over 220 members.

Over the years, three buildings were acquired to accommodate a growing array of teaching and service programs, including well-developed youth, residential and prison programs.  But in the last decade it became increasingly clear we were outgrowing the available space, in the now-trendy Hawthorne district of Portland.

Within the Siskiyou Householder Refuge and Dharma Rain community, our challenge to each other is to “Live your values.” Now that we have our own space, we hope to create a refuge within the urban rush and noise of the everyday secular world that most of us must inhabit for our livelihood. 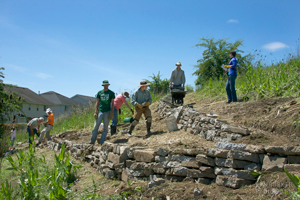 A south work party, building a path to connect green spaces and neighborhoods on both sides of the site. We are collaborating with two groups: Working with Village Building Convergence and Friends of Trees.

We will be here for each other, to support our dreams, spiritual and perhaps otherwise, both individual and collective, through mutual support and acceptance of differences, caring enough to see the similarities.  There is no requirement to be Buddhist to live in the cohousing community, although we will work in cooperation with, and will be associated with, Dharma Rain Zen Center.

It’s easy to imagine how this community would be desirable for Buddhists, since the site is right next to a Buddhist temple. You might find it easier to do morning meditation when there’s a roomful of others doing it every morning, just a two-minute walk away.

How will it be for non-Buddhists, for the spouses and children and those following another tradition?  The focus of cohousing is community, the synergistic integration of the people who live there. We will share the common aspects or traditions, and respect those that aren’t held in common.

For example, there will be common meals shared a few times each week. At Dharma Rain, a meal verse is recited before each meal.  At the Householder Refuge, we may rotate verses that are used by different traditions. Just as there will be quiet times as the Dharma Rain temple moves thru the daily and retreat schedules, so will support and cooperation be given to other members of our community as needed or requested.

This project offers a beneficial model for future developments in Western dharma as it integrates monastic and lay life and practice, the young and the aging, and the temple with the surrounding community.

A view of the site. The Householder Refuge will be in the far lower right of the photo.

The site will be reminiscent of many large temple compounds in Japan, China and Southeast Asia, which are used almost like parks, with the neighbors enjoying the grounds. This is a very different feel from a cloistered monastery, and movement in this direction is a welcome development.

The 32 units are to range in size from studios to four-bedroom units, plus a common house.  The common house is an essential part of cohousing, the heart of the community.  Shared by all, it will be our “living room,” where small, intimate conversations can be shared, and where larger events and community gatherings take place. 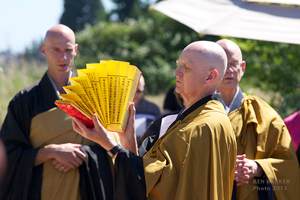 While developed as apartments, the complex will be collectively owned by the cohousing members; members essentially will rent to themselves. The cohousing group will be self-governed and independent of the temple, but associated with it.

Consensus process in community decision making, mindfulness, living harmoniously with others and with the earth are guiding principles, but there will be no “religious test,” and temple membership will not be required.

However, at least a willingness to live close to a Buddhist center will be important, as cooperation between the temple and the cohousing group is essential.

Access to the community gardens and other shared resources with the temple will be significant elements of community life.  The Siskiyou Householder Refuge will be a refuge for those interested in spiritual cultivation. It will be a place to live with others who share contemplative values, each pursuing their unique spiritual path, with support of the cohousing community and the nearby temple.

It will be a spiritual retreat center with enough land around it to buffer from adjoining uses. 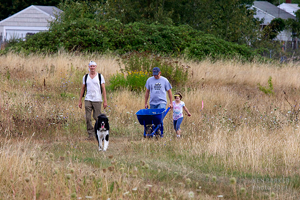 Kakumyo Lowe-Charde, resident priest and project manager, and his dog Ananda, returning with volunteers after a long day of clearing scotch-broom and blackberries. Refuge property.

A community garden, an orchard, numerous habitat areas open to the public, an array of collaborations with local environmental, educational and agricultural groups, and a path through the site connecting to the neighborhood will all help to enhance the natural qualities of the site, and will root the development in the social fabric of the local community.

The Dharma School serves 3-18 year olds with an interest in Buddhism, and a preschool program will offer families with 2-4 year olds a mindfulness-based but non-denominational curriculum five days a week.  It will be fertile ground from which to grow a cohousing community.  This will be our greater “village”.

Amidst this rough patch of nature, a wilderness in the midst of the urban setting that is Portland, a dream is being born.  With birds singing, coyotes waiting for nightfall quietly in their dens, rabbits moving in and out of the tall grass and blackberry thickets, this dream is growing into reality.

0
SHARES
Share
Posted Under: 2014, Sangha News, Summer
About the Author: Carlene "Zoki" Orman
Carlene "Zoki" Orman has been a lay discipline at Dharma Rain Zen Center for more than 15 years. She is a founding member of member of the Siskiyou Householder Refuge and is on the membership and governance committee. As I grew up on a farm in Nebraska, belonging to this community is a return to the land, practice as it's meant to be.