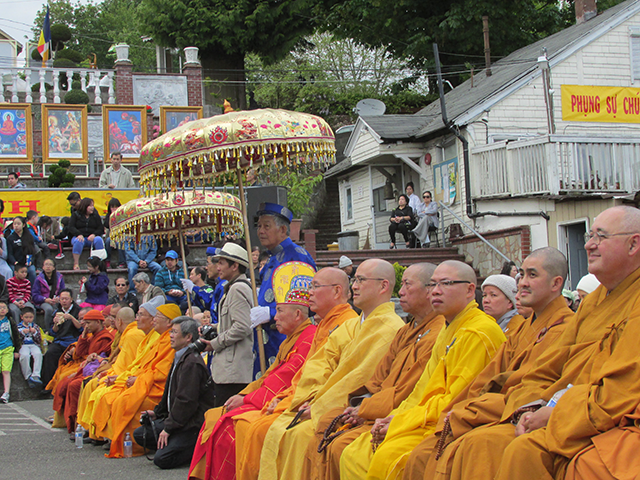 Monks line up for the consecration of the new statue of Buddha as a boy, for the Vesak celebration on May 10.
Photos by: Yvette Cardozo, Steve Wilhelm.

Hundreds of Vietnamese Buddhists gathered at Seattle’s Co Lam Temple May 10, to celebrate the traditional annual Buddhist holiday of Vesak, and also to consecrate the latest in the temple’s extensive collection of Buddhist statues and art.

The statue collection, likely the largest in the greater Seattle area, is in the form of a park-like garden that climbs in terraces above the temple itself.

Shaded by leafy glades of trees, and near many benches and seats where people can sit and contemplate, the statue garden offers a serene alternative to the rush of traffic on South Seattle’s Martin Luther King Way, which is below and not far to the east.

The temple is a Vietnamese pure land temple. The abbot is Thich Nguyen An.

The focus on May 10 was the newest statue, a relatively small rendition of the Buddha as a young boy, one arm held high.

The sonorous chants, some in Vietnamese and some in Pali, seemed to ripple over the main temple and the courtyard below, transforming it into a scene from Asia, far removed from Seattle traffic.

“Everyone enjoys a beautiful place,” said Thay Kim, a senior monastic at the temple, about the sculpture garden. “Anyone who comes, they ask about Buddhism. They relax and it calms their minds. It’s good for their mental health.” 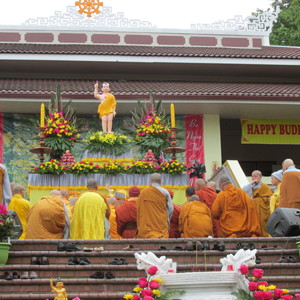 Monks bowing before the statue, which is at the front of the main shrine room at Colam Temple.

The rest of the garden portrays many aspects of the Buddha’s life, includes scriptures for the purpose of contemplation, and reminds us of death and dying.

One of the most striking sculptures runs for about 50 feet along the west side of the main temple, illustrating important moments in the life of the Buddha.

For instance, the Buddha’s journey away from his father’s castle, when the Buddha decided to seek enlightenment rather that fulfill his father’s wishes that he take over the kingdom, is portrayed.

The concrete sculpture also includes a massive portrayal of the cycles of life, with multiple statues of people ranged around a huge globe.

The cycle starts with a statue of a young baby, and then progresses through youth into adulthood. Then the artist displayed an astute knowledge of American history, because the sequence of statues includes images of Richard Nixon and George Washington!

Then, of course, the cycle continues, into old age and death.

“At last there will be sickness and death, they go around and around in the circle of birth and death, samsara,” Kim said. 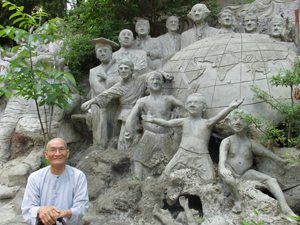 Thay Kim, a leading monastic at Co Lam, sitting at the circle of life sculpture.

This area also includes a lovely white Kwan Yin, about 10 feet high, and a huge dragon.

Climbing up the hill, one encounters murals of main events of the Buddha’s life, with explanations.

A climber also is rewarded with panels, set into the stone, with advice from the Buddha’s teachings.

“Do not dwell in the past, do not dream of the future. Concentrate on the present moment,” says one, in Vietnamese and in English.

The garden includes a thousand-armed Chenrezig statue, representing compassion, in a glass case.

It’s also peppered with many colorful statues of the 18 arhants, realized beings, some of whom were rough characters early in their lives.

Further up is one of the highlights of the garden, a 26-foot reclining Buddha, outdoors but roofed with a translucent structure to protect visitors from the rain.

The serene white Buddha, on his side, is indeed an oasis of peace. 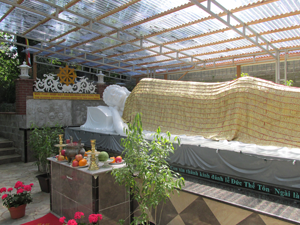 Under a protective roof, but almost outdoors, the 26-foot reclining Buddha radiates serenity.

In a tiled alcove, surrounded by a painting of many monastics, the statue reminds visitors of their potential to awaken, and also illustrates the moment of the Buddha’s passing.

The upper level of the garden also includes a beautiful life-sized golden standing Buddha, which was donated by Ajahn Ritthi, abbot of Wat Attamayatarama monastery in Woodinville, a Thai monastery.