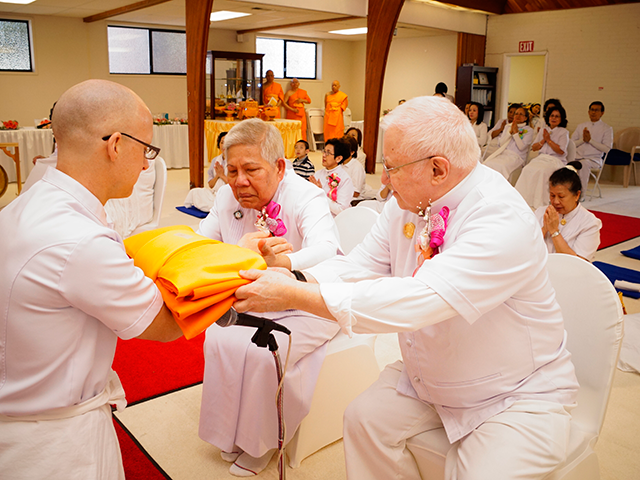 Bob Baumgartner receives his robe from his “parents” in the community, Supawadee and Tom Davis.
Photos: Seattle Meditation Center Staff.

Eyes shut, I felt the pull of the razorblade as it glided over my scalp. I opened my eyes and saw a group of smiling people, all wearing white, hands in prayer. Then the razor took aim at an eyebrow.

I shut my eyes again.  This was not my typical Sunday morning.

I was one of two men ordaining April 13 through 16 as Buddhist novices at the Seattle Meditation Center in Mountlake Terrace, Washington. This is a branch of the Dhammakaya Temple in Thailand, one of the biggest Buddhist meditation centers in the world. 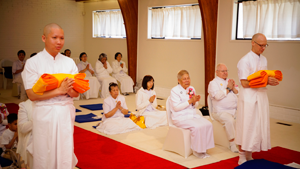 My unusually short period as a novice monk occurred due to the schedule of the other ordinant, 29-year-old Chayanon “Mac” Sontidpanya.

Born in Thailand, Mac came to the U.S. at age 16. He lives in Indiana but was ordaining in Seattle to fulfill a promise to his aunt. And I was asked to join him. The event was rushed because Mac  planned to start a new job at Ford Motor Co. in Dearborn, Michigan, a day after disrobing.

For me, a 49-year-old American man, the short duration of “my life as a monk” made it easier and harder. It was easier to arrange my schedule – to get agreement from my wife of 20 years and my son , 18, and my daughter, 14, and to get time off work. But the short period in robes made it hard to acclimate myself to the role. 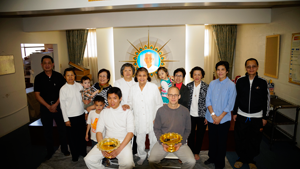 Ordinants Sontidpanya and Baumgartner, and friends, pose for a picture just before the hair cutting.

In short, I had a lot to learn. For one thing, I discovered that the role of the monk in Thai society is more than a private quest for enlightenment. It’s a very public role that carries with it high expectations and strict social obligations.

Sure, I had heard about the precepts of monks at Dhammakaya temples around the world, including an abstinence from sex, no meals after noon, and no sleeping on soft mattresses. (Monks abide by 227 precepts. Novices take 10.) 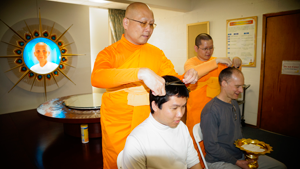 Although examples of these standards abounded around me (I’d been visiting the temple for more than five years), they only became conscious the hard way – by my making mistakes and having someone point them out to me.

Another challenge: Poise and deportment have never been my greatest attributes.

The real monks made it look easy. As a novice, I was supposed to join them as a figurehead in the community, a symbol of spiritual aspiration and good practices. But when it came to fulfilling this role, I felt severely lacking.

When laywomen brought up gifts, I held the cloth awkwardly, and I floundered and blushed to produce a blessing. When I was supposed to chant, I reached for my “cheat sheet,” the book on chanting. Even then, with the book, I lagged behind and did a poor job of it.

Even Mac, who grew up as a Buddhist, felt challenged.

A major undertaking was the one that started the day: dressing.

I figured out fairly quickly how to secure the bottom robe. Just slip it around yourself, fold it twice, zigzag the fabric toward yourself, then tie it up with the belt. But the second robe, the one that goes over one shoulder, I never completely figured out. 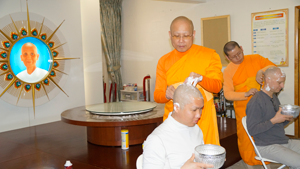 The ordinants’ heads are shaven before the ceremony.

If one of the real monks didn’t show up in the morning and help us out, Mac and I might still be trying to get dressed today.

I found wearing robes to be disconcerting. For a guy accustomed to wearing pants, robes present a drafty challenge. I was always asking Mac whether I was exposing too much, a real possibility I thought, especially when bowing onstage. And then, every so often, I felt the robes slipping. I imaged making one wrong move and being disrobed – literally.

Wearing robes is like wearing origami and walking around in it all day. It feels precarious to say the least.

My own shortcomings gave me greater respect and appreciation for real monks. They live by a standard that most people cannot imagine. My kids often bring up a criticism levelled at monks by people who are not Buddhists, who say, “Monks don’t do any work. They just sit around all day.”

But Buddhists see it differently. They respect and value the practice of the monk.

I asked Venerable Manikanto Bhikkhu, the abbot of the Seattle Meditation Center, and Venerable Pormov Bhikkhu, who trained Mac and me as novices, what they thought. Why did they become monks?

Venerable Manikanto, originally from Bangkok, said that as a college student he wanted to learn how to quiet the mind. Entering the monastery scheduled his life according to a higher set of priorities: meditation and the pursuit of perfection.

“The purpose of ordination,” he said, “is to train yourself to reach the ultimate goal of nirvana.” 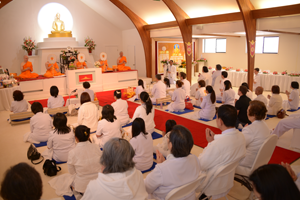 A life changed by the Cambodian civil war

Venerable Pormov, originally from Kompong Thom Province, Cambodia, said that the death and destruction of the Cambodian civil war, in which nearly 2 million people died, played a role in his decision to become a monk.

No family escaped the suffering of the war. His grandfather’s friends had ties to the French government, so they were killed. His grandfather went crazy, so the Khmer Rouge spared his life. Because the schools had all been destroyed, the young venerable went to live and study in Phnom Penh with his uncle, a talented doctor who treated everyone, rich or poor.

The young venerable aspired to be a doctor like his uncle. But after two years of training, his uncle suddenly died.

“At that time, I realized our lives are very short,” Pormov said. “I saw a lot of people suffering, and that there would be another way to make peace.” 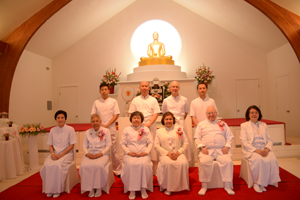 The ordinants’ families and friends gather with them on ordination day.

After Pormov ‘s grandmother told him about her experience meditating, the young venerable joined a Dhammakaya meditation program.

“After one week, I found the light in my body and peace,” he said. “I knew that I would continue to learn (about meditation).”

At 19, Pormov received a Dhammakaya Foundation scholarship for Buddhist studies. Since then, he has been to New Zealand and the USA as a monk. Now, at age 36, he teaches meditation in Seattle with the abbot, age 49. He is also a part-time translator of Pali, Sanskrit, and the Khmer language. He delights in chanting and meditation.

One day after I had disrobed I visited and saw him beaming, “I was just chanting and meditating – all by myself,” he said. “I am so happy.”

For newcomers, every Tuesday and Thursday, either Venerable Manikanto or Venerable Pormov leads a meditation class which starts at 7 pm.

Why I took robes, even for just four days

My own experience as a monk was good but not glorious. Seeing how ill-prepared I was for life as a monk, you might wonder: What was I doing there? What was I looking for?

These were questions I asked myself, especially when I looked into the mirror or saw a picture of myself as a monk. What was I doing?

The answer to that question had come to me, oddly enough, at a bus stop, a few weeks before ordination.

I was in Seattle’s University District, looking back over my life, when I realized something: There had been a pattern to my choices. My interests and decisions made sense.

I realized that I had pursued a sense of greater possibilities, the spark of connection between people, and the feeling that something profound could be found in life.

That’s why I loved certain places as a kid, why I liked literature and writing, why I had travelled in Nepal and Thailand, and why I had lived in Taiwan for 10 years. 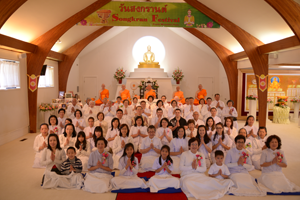 That’s why I was one of the first altar boys in my class, why I chose the college I attended, why I studied journalism, why I married the woman I did, and why I ordained as a monk. I had been pursuing insight into greater possibilities that, I feel, do exist. And that’s what turned my head when I saw the Seattle Meditation Center open only two blocks from my home.

Since then, the center has always delivered a positive experience. Sometimes, it expands my understanding beyond my previous concepts. Sometimes it helps me reach understandings that are the opposite of what I thought I knew.

This can be like suddenly noticing the negative space around objects, rather than the objects themselves, or suddenly seeing the yin where previously I had only seen the yang.

What kept me attending services at the center was not the forcefulness of any argument but the enthusiasm by which its members introduced me to their practices. It was as if they said, “Here, this is what we do. This is how we practice. This is how we feel. And you can experience it too.”

This positive support, and emphasis on experience rather than faith, pushes me forward. It’s as Yoda said in Star Wars: “Try not. Do, or do not.”

Doing showed me the subtle yet powerful benefits of meditation. And when I hear chanting, I feel something unexplainable. 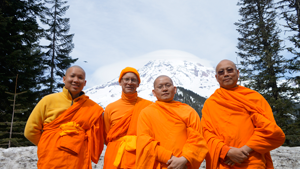 A visit to Mt. Rainier the day after ordination. From left to right: Sontidpanya, Baumgartner, Ven. Pormov and Ven. Manikanto.

In the poem The Road Not Taken, poet Robert Frost suggests that each person can choose one and only one path in life. One person. One path.

If I was to draw a conclusion from my four days as a monk, it would be a sense of appreciation for the people at the Seattle Meditation Center. I feel I don’t live up to their graciousness.

But up on the stage, during the meditation session on the day of my ordination, I did get something they didn’t get: A look at them.

So many people meditating, with smiles on their faces.  They were beautiful, and that sight alone gave me a glimpse at greater possibilities for me, and for mankind.

I found my path. I found my people. In short, I would rather be a fool who senses greater possibilities than be a scholar who knows none exist.

The next ordination session begins with training June 29 and ordination July 6. On July 13, a meditation session in the morning will be followed by a traditional candlelight offering at 1 pm.

0
SHARES
Share
Posted Under: 2014, Sangha News, Summer
About the Author: Bob Baumgartner
After working in small newspapers near Seattle, Bob Baumgartner moved to Taiwan, where he taught English, studied Chinese, and was the first foreigner to earn an MBA at Cheng Kung University, Tainan. He now works in testing at Microsoft for Wipro, an Indian multinational company. On the weekends, you might find him at the Seattle Meditation Center.