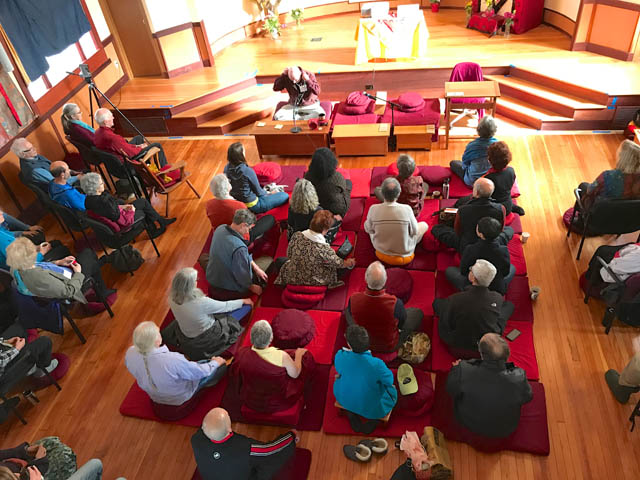 On February 10, before our annual sangha meeting of Kagyu Changchub Chuling (KCC), we all sat down to eat lunch at our Portland center.

This sounds unremarkable by itself. But for those of us who had waited more than two decades to find a new urban center and another year for its renovation, just having 60 of us sit down to eat together in our own place was a big deal.

Since we purchased our new center (a 1936 church) in December, 2016, a combined team of volunteers and contractors has been steadily renovating the building.

In June we completed enough work to allow us to move into the meditation hall on the main level. Auspiciously this was just in nick of time to host a visit from Khenpo Lodro Donyo Rinpoche, our principal connection to our lineage of practice.

Getting the sangha hall on the lower level ready, for our long-awaited annual meeting lunch, was another major step toward completing the renovation.

In the coming months we plan to finish renovations, allowing for reactivation of the children’s program and other activities. If all goes well, this will give us a moment to pause before the first three-year retreat finishes in June at Ser Cho Osel Ling, our retreat center near Goldendale, Washington.

The renovation at the Portland urban center has broadly engaged the sangha, with more than 114 different people contributing hands-on work, and about 145 offering financial support. 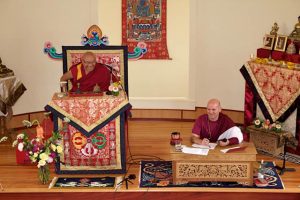 Though it was (and still is) a lot of effort to renovate the building, through collaborating for more than 20 years on the retreat center, while managing KCC, we have become familiar with our community’s skills and how we can work together. This contributed to a remarkably smooth process.

From a financial perspective we were fortunate to have the equity from the house KCC bought in 1981. The $576,000 net from the sale of the house covered a large percentage of the $628,700 cost of the church. To date the renovation work has come to about $420,000.

Looking far into the future

Sanje Eliot and board.

Both the new urban center and the retreat center are the fruition of a long-term vision we adopted in the late 1990s.

Even then the need for a larger space was obvious. The original house could no longer accommodate all active members for sitting, or for occasions like the annual sangha meeting.

Looking at the bigger picture, it was also clear that the long-term viability of the community depended on members experiencing extended meditation retreats, like the traditional three-year retreat our Lama Michael Conklin had completed. A bigger space, by itself, was not a complete answer.

Since the retreat center seemed to be the long-term key, and the most challenging element, we began there.

We purchased the retreat land in 2001. Then after years of planning, fundraising and construction, the first one-year retreat started in 2013, with the three-year retreat commencing in 2015.

The culmination of these two long streams of sustained effort this year, will lead to a time of transition for our center. It will take some time to see what unfolds from this momentum. 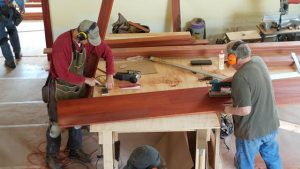 For the time being we will set aside major new initiatives, and watch the unfolding as we  focus on going deeper into the teachings and practices we already have. This gentle approach will apply to the activities at the urban center, and to re-entry of people from retreat.

This panorama of activity over two decades, including the long retreats and the urban center,  is rather unusual for a modest-sized sangha with about 120 sustaining supporters.

KCC is at heart just a local dharma center without the backing of a national or even regional organization. While we began these efforts with the blessing and encouragement of Bokar Rinpoche, and we continue a close connection with his dharma heir Khenpo Lodro Donyo Rinpoche, our vision is our own and our work is independent. 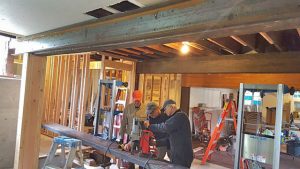 Drilling a steel beam, during the renovation.

Both lamas were very clear that we are in the best position to see what needs to be done, what is possible and how to manage our affairs. Over these many years this independence has required us to search for an internal resourcefulness we would not have otherwise found. Over time our independence has gradually built our confidence, and a sense of responsibility for how the dharma takes root here.

In the long run the encouragement to be self-reliant was a profound gift.

After my wife Dora and I completed our one-year retreat, a friend who had completed two three-year retreats said to us, “You will not know what you have done for at least a year.”

This is akin to letting something sit after taking it out of the oven, or letting fruit ripen after picking. To give the people from retreat the opportunity to see how their practice ripens as they re-enter life outside the retreat, they will not be asked take on any formal roles or teaching responsibilities for a year after retreat. This will also allow them to see how the community has evolved in the meantime.

The new center includes a bookstore.

The community has a role to support this process as well, giving up expectations and projections about who the retreatants have become and what they might do.

We might also find some guidance in the lama’s advice. It will take time to see how our patterns of group practice evolve and what changes arise as we shift away from the long-term effort to fulfill the vision, and move into a new phase of center history.

As we move into this new phase, we hope that with our larger urban center and our beautiful retreat facility we will be better able to assist those interested in the dharma, and all beings in general.

0
SHARES
Share
Posted Under: 2018, Sangha News, Spring
About the Author: Bill Spangle
Bill Spangle came to Kagyu Changchub Chuling in Portland Oregon in 1980. An associate teacher at the center, he has been not-so-patiently waiting for a sit-down lunch, in KCC’s own urban center, since 1998. In addition to assisting in teaching he had various roles in the design and construction the new urban center in Portland, as well as the retreat center.