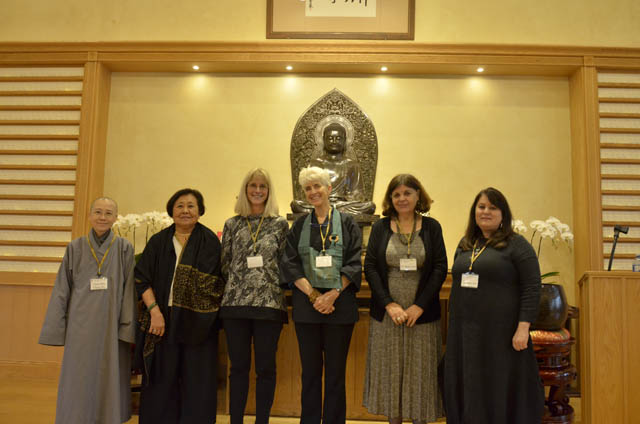 In March 2018 the Vancouver Chan Meditation Centre opened in downtown Vancouver, British Columbia, dedicated to sharing the dharma with Westerners.

The new centre is an offshoot of the existing Dharma Drum Vancouver Centre, which is in a southern suburb of Vancouver and which primarily serves Chinese dharma practitioners. The new facility, at 333-550 Broadway, will host meditation classes as well as visiting lecturers and teachers.

The new Vancouver centre will provide group meditation and instruction, and will host English-speaking teachers to reach a predominantly Western audience. To this end traditional Chinese temple decor has been abandoned in favour of local and sustainable woods, cork floors, and cushions manufactured by Great Vow Monastery in Oregon.

While Dharma Drum Vancouver Centre began as a Chinese-speaking sangha, leadership has never lost sight of increasing founding Master Sheng Yeng’s influence in the West.  To quote from the welcome page of the centre web site, “We welcome all who seek freedom of mind and heart to practice Chan Buddhism (Chinese Zen) with us. Our experienced monastic and lay teachers offer guidance in Chan meditation practice. While the context is the Buddha’s teaching, these practices are universal in scope. They help to develop awareness and calm within ourselves, and to lead a life of cultivating compassion and wisdom.”

Because the original monastery abbess spoke only Mandarin, in the early years the temple served an exclusively Chinese audience.  But after the 2013 arrival of Abbess Chang Wu Fashi, who is fluent in English and holds an American MBA, the temple began to provide English translation and began to invite Western teachers to offer retreats. The center provided Chinese translation for those in need.

Soon a more accessible and central facility was needed to meet growing interest in the English-speaking community.

The present location in Richmond, a southern suburb of Vancouver, will remain open.  Richmond is located just south of the Vancouver International Airport, about 10 miles from downtown Vancouver.  In addition to its substantial Chan Hall (meditation hall), this two-acre property includes monastic residences, offices, a library, meeting rooms, and vegetable gardens and greenhouses.

The new Vancouver Chan Meditation Centre is in the heart of Vancouver, at Broadway and Cambie on the Sky Train line at Broadway Station. The 1,200-square-foot facility, consisting of an 800-square-foot meditation hall and a 400-square-foot meeting room, is housed in a new low-rise office building.  The site was chosen for its central location and proximity to transit.

“Our present centre is difficult to get to by transit and this makes it hard for interested people in the city to participate,” said Abbess Venerable Chang Wu. “We wanted to extend our services to a broader audience and our present facility does not accommodate this.” 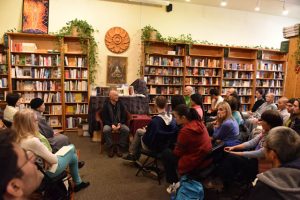 Zarko Andricevic, dharma heir of the Venerable Master Sheng Yen and founder of Dharmaloka, a Buddhist community in Croatia, in late October spoke at Banyen Books about Chan meditation.

The centres now host a variety of services including group meditation, lectures, classes and retreats in Mandarin with English translation, as well as in English with Mandarin translation.

The practice moved from China also to Vietnam and Korea, where it is called seon.

Each culture lent its distinct flavour to the core teachings.  In Dharma Drum Vancouver’s version of Chan, sitting meditation is supplemented with chanting and prostration practices, as well as moving meditation using walking and a variety of Chan yoga exercises.

The history of the new centre is a continuation of the fascinating history of Sheng Yen and Dharma Drum Mountain, the organization he founded.  His autobiography, “Footprints in the Snow,” is a beautiful read.

Sheng Yen was born in poverty in the city of Nantong near Shanghai.   He was a sickly child who did not speak until the age of five. He became a monk at age 13.  His early education was only the equivalent of a modern grade 4.  During the Communist takeover of the mainland he escaped to Taiwan by enlisting in the nationalist army. 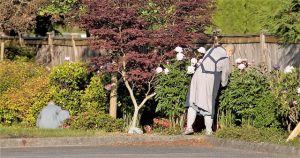 While in the army Sheng Yen always dreamed of returning to monastic life.  He began to write poetry and short essays for Buddhist magazines in Taiwan.  Through his writing he met prominent people in the world of Taiwanese Buddhism, and with their help he was discharged from the army and returned to monastic life.

After training in solitary retreat for six years from 1961-68, he moved to Japan where he completed a doctorate in Buddhist literature at Rissho University.  He received full transmission in the Linji (Rinzai) Chan tradition from Master Ling Yuan in 1975 and in the Caodong (Soto) tradition in 1978 from Master Dong Chu.

His fame in the West began in New York City.  He arrived there in 1976 and founded the Chan Meditation Centre in Queens in 1977.  Invited to teach by Chinese immigrants he found himself unexpectedly overrun with Western students, and wrestled with how to transmit the dharma to them effectively.

History shows he found a way as he began publication of Chan Magazine in 1977, and by 1997 Dharma Drum Retreat Centre (DDRC) began operation, holding retreats in Queens with the facility in Pine Bush, New York opening soon after.

He founded Dharma Drum Mountain in 1989.  In 1993 ground was broken in Taipei for the new facility and headquarters, which was completed in 2006, three years before the master’s death.

His Western dharma heir John Cook began the Western Chan Fellowship in England.  Through him and other Western teachers, as well as Eastern monastics, a truly global organization has been established with sitting groups all over the United States and Canada, with centres in Los Angeles, San Francisco and Seattle on the West Coast; and New York City, Washington D.C., Boston, Atlanta, Tallahassee, Toronto on the East Coast. 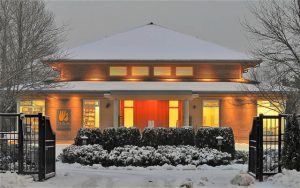 Dharma Drum Vancouver Centre began with a lecture in Vancouver by Master Sheng Yen in 1994.  He was invited back for another lecture in 1995 and soon after a sitting group of Chinese immigrants formed.  They began by using each other’s homes and soon after rented a facility.

To establish a more permanent facility, sitting group members began raising money.  The story is that Master Sheng Yen promised them a Fashi (monastic) if they succeed, and to everyone’s surprise they did.  In 2003 the property on #5 road was purchased and in 2006 the facility was completed.

“True to his word Master Sheng Yen sent a single tiny female monastic,” said Abbess Chang Wu Fashi relates, “She lived here alone and at the time there were no fences and no alarm systems.  She spoke no English.  It must have been very hard for her.”

Since then the monastic community at the temple has grown to five resident nuns, and the sangha has a vibrant and dedicated lay following.  Volunteer work is a cornerstone of Master Sheng Yen’s teaching, and Dharma Drum Vancouver Centre has received several awards for community service in Richmond.  The Vancouver Centre is now listed as one of the six main Chan Meditation Centre affiliates of Dharma Drum, in North America.

People of like minds from all walks of life come to practice Chan, receive support from the community, deepen their understanding of themselves, and learn to live in harmony with others and nature. In light of this realization, we hope to bring peace and happiness to the world.

177
SHARES
Share
Posted Under: 2018, Dharma In Canada, Featured On Home Page, Spring
About the Author: Tom Kaczmarski
Tom Kaczmarski is a long-time Buddhist practitioner.  Presently he and his wife Svetlana Petelina sit with Dharma Drum Mountain Vancouver, and occasionally attend retreats hosted by other sanghas as well.  To support his and his wife’s journey to greater understanding of the dharma, Kaczmarski works as a grip on film sets in Vancouver and the lower mainland.