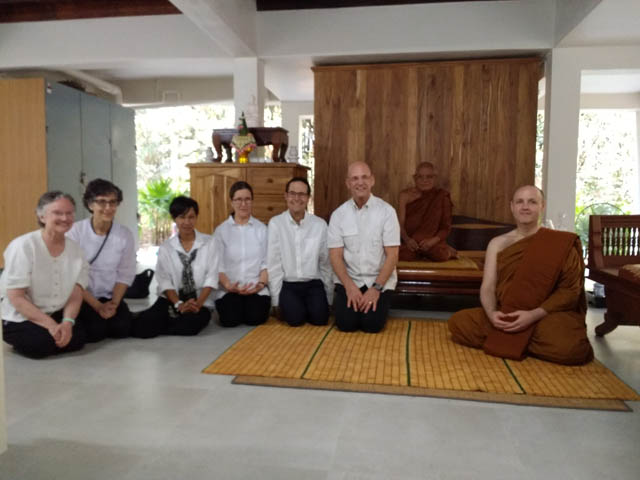 Five Oregon people traveled to Thailand in January, to honor their late teacher Ajahn Chah, 100 years after he was born.

Each Jan. 16, followers of Ajahn Chah and those he trained gather at Wat Nong Pah Pong in northeastern Thailand, for years Ajahn Chah’s primary monastery, to honor him and to celebrate the anniversary of his death.

It was an amazing experience to be part of the festivities honoring Ajahn Chah, our lineage founder, at the original monastery in Thailand. It gave us a direct link and connection to our lineage, which strengthened our devotion and our individual practices. 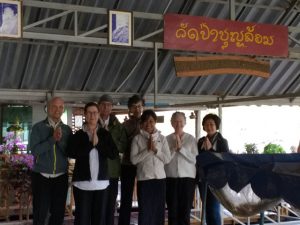 Friday, January 12: Arriving from Bangkok and Chiang Mai, we landed at the Ubon airport in the afternoon. We immediately were taken to Wat Nong Pa Pong, where we were privileged to meet with Abbot Ajahn Liem, to whom we paid respects.

It was quite inspiring to witness Ajahn Pasanno and Ajahn Sudanto in the presence of Ajahn Liem in Thailand, where they both ordained and lived for many years. Meeting Ajahn Liem at Wat Nong Pah Pong was truly a special moment.

Because of our relationships with Western monks in the Ajahn Chah tradition, especially of Abhayagiri Buddhist Monastery and the Pacific Hermitage, we were lucky to have access to Ajahn Liem and to be in his presence. 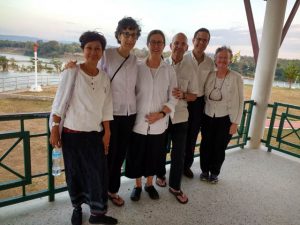 Saturday, Jan. 13:  We started the day with a small offering to three monks on alms round who happened to be passing by the hotel. We were then privileged and again very lucky to pay visits to three branch monasteries founded by Ajahn Chah outside Ubon, each of which struck us as very special, particularly with their focus on nature.

We started by going to offer a meal at Wat Pah Boon Lom, which is located on the Mun River. We saw friends both Western and Thai at the monastery.

We then traveled to Wat Pa Don Thort, a monastery on an island. The original abbot was Ajahn Sao, the teacher of Ajahn Mun. But Ajahn Mun became enlightened first and went back to teach Ajahn Sao how to reach enlightenment.

Finally we visited Wat Pah Phu Jong Gom, which is in a national park. Some went on hikes led by monks, and some stayed to meditate in the sala. We then toured the monastery.

On the way home we stopped at Two Color River, to see where the Mun and Mekong rivers come together. We could see Laos on the other side of the Mekong. 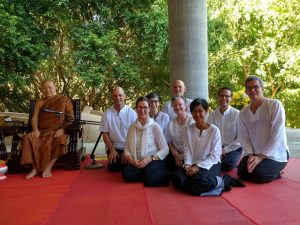 Sunday, January 14: We participated in the meal offering at Wat Pa Nanachat, which was attended by about 300 laypeople.

Wat Pa Nanachat was founded by Ajahn Chah as a training center for Western monks, and Ajahn Pasanno was the abbot there for many years before coming to California. Ajahn Sudanto lived there for many years, so many of us feel a strong connection to the monastery.

Before the meal was offered we paid respects to several of the more senior monks present including Ajahn Pasanno. Ajahn Sundara was the most senior nun present.

In our tradition after the meal is offered to the monks, but before they or laypeople begin eating, the monks and nuns chant a blessing for the laypeople in appreciation of the generosity they are receiving. Here the blessings were especially touching and deeply felt, because so many of these monastics have visited Portland Friends of the Dhamma and the Pacific Hermitage. 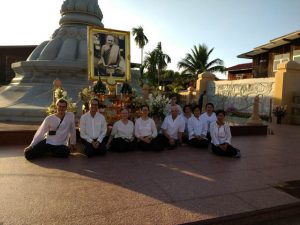 Some of us were able to pay respects to Ajahn Amaro, now the abbot of Amaravati Buddhist Monastery in England, who has often visited Portland Friends of the Dhamma and taught retreats in Oregon. We also came to know Ajahn Amaro as co-abbot of Abhayagiri, the first Ajahn Chah branch monastery in the West.

Ajahn Sudanto took us on a tour of the wat. He lived there for several years and his connection to the monastery is strong. Because he was leading us, we were able to visit parts of the monastery normally reserved for the monks.

In the afternoon, we visited Wat Pah Sai Gnam (Temple of the Beautiful Banyan Tree), which struck us as a magical place. There we received a dhamma talk from Abbot Ajahn Anek, a highly venerated monk in our tradition.

Ajahn Anek is a gifted sculptor, among his many other talents and accomplishments, and many of his sculptures are around the wat. When he founded the monastery he planted groves of banyan trees, on what were formerly rice fields.

In the late afternoon we visited Ajahn Chah’s birthplace, in a village close to Wat Nong Pa Pong.  A memorial had been completed very recently, which we were lucky to be able to visit. 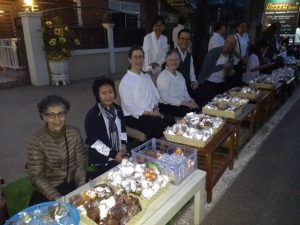 Monday, January 15: We again participated in the meal offering at Wat Pat Nanachat, with Ajahn Sumedho, who is deeply respected and loved in Thailand, leading the meal blessing. Because of his age, his decreasing traveling, and his health, it was quite an honor to be in his presence.

We have a direct relationship with Ajahn Sumedho, as he attended the opening ceremonies for Portland Friends of the Dhamma and the Pacific Hermitage, and returned several times to teach.

After a rest we returned to Wat Nong Pah Pong to attend what was supposed to be an “intimate” question-and-answer session with Ajahn Sumedho. But it was attended by at least 200 people, and became primarily a dhamma talk by Ajahn Sumedho.

By this time the number of visitors had grown to nearly 500, as we neared the Tuesday celebration. 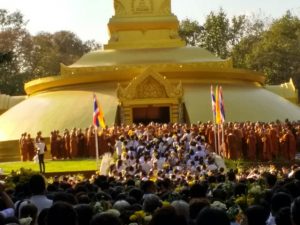 The chedi, or stupa, where Ajahn Chah’s remains are honored and kept.

Tuesday, January 16: We started the celebration day of Ajahn Chah’s centenary and death by offering alms food to the monks of Wat Nong Pah Pong. We then had breakfast at some of the many food and drink stands that each year freely offer food to laypeople visiting the monastery.

Some of us also visited the Ajahn Chah Museum at the monastery. Then after resting at our hotel, we returned to Wat Nong Pah Pong for the official celebration ceremony.

The ceremony started with a procession to the Ajahn Chah chedi, also called a stupa, which contains his relics. We placed flowers there.

Monks led the procession, followed by nuns, then female mae chees who take lesser vows, and last by lay people. The ceremony was attended by more than 1,000 monastics and 30,000 laypeople, and the crowd was incredibly harmonious.

Throughout the trip and particularly at the ceremony, as Western followers in the Ajahn Chah tradition, we were greeted with many smiles and bows and the Thai greeting, “Suwadika.”

Wednesday, January 17: The group participated for the last time in the meal offering at Wat Pah Nanachat and separated. Some of us traveled to Chiang Mai to be tourists; some stayed at Wat Pa Nanachat, and then went on to other monasteries to visit and to be on retreat.

0
SHARES
Share
Posted Under: 2018, Sangha News, Spring
About the Author: Ruby Grad
Ruby Grad has practiced Vipassana (insight) meditation since 1988, focusing primarily on the Ajahn Chah Thai forest lineage. She practices with the Pacific Hermitage in White Salmon, Washington; Abhayagiri Buddhist Monastery in Redwood Valley, California; and Portland Friends of the Dhamma. She graduated from the Community Dharma Leader (CDL) and Dedicated Practitioner (DPP) programs of Spirit Rock Meditation Center and worked there. She currently teaches meditation in Portland and at Multnomah County Jail there.