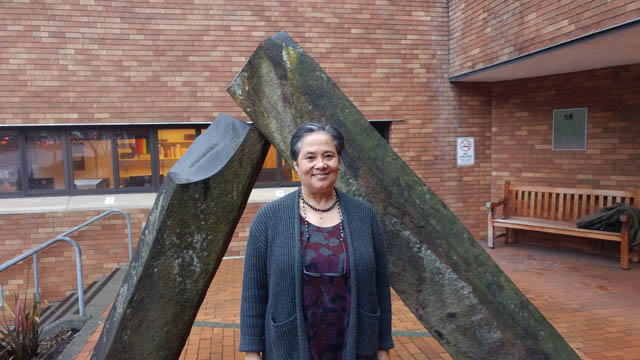 Bonnie Duran is a professor at the University of Washington School of Social Work, in addition to her dharma teachings.
Photos by: Debbie Ruiz, Steve Wilhelm, others

This makes Duran the first Native American, and the first Northwesterner, to join the council. The council sets policy for Spirit Rock Meditation Center, which is in Marin County north of San Francisco. Covering 412 acres, and serving 60,000 people annually, Spirit Rock is the largest West Coast center supporting insight meditation in the Buddhist tradition. 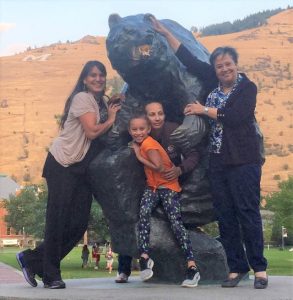 As a mixed-race Native American, Duran has a strong dedication to working with tribal people around the United States. Here she’s at the University of Montana in Missoula, with native friends.

The invitation was something of a surprise to Duran, who in 2016 became a fully certified dharma teacher in the insight meditation tradition, after completing a four-year training program. The teachers council until recently included 27 senior teachers, who set policy and do most of the teaching at Spirit Rock.

“I’ll get to see the behind the curtains of one of the biggest Western Theravada centers, and maybe I’ll have some influence on how it runs,” Duran said, adding that one of her chief goals will be to make retreats more accessible, especially to people of color.

“It’s expensive to go on retreat there,” she said. “And not accessible to people without money.”

Spirit Rock has been a national leader in supporting diversity among dharma practitioners, to move away from Buddhist practice being primarily the domain of well-off white people. The center does offer scholarships, especially to people from diverse backgrounds. 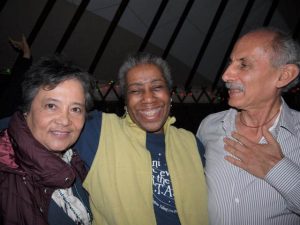 At the 2016 graduation from teacher training, Duran with Jack Kornfield, one of the three co-founders of Insight Meditation Society, and with just-graduated teacher DaRa Williams.

“In general, the present expansion of Spirit Rock’s Teachers Council marks a turning point in our deepening commitment to diversity, equity and inclusion,” said a Spirit Rock spokesperson.

“Spirit Rock is deeply grateful to have Bonnie Duran joining our Teachers Council,” the spokesperson said. “Bonnie’s training and wisdom as a dharma teacher in the Insight tradition, as a professor at the University of Washington, and as a Native American and self-identified person of mixed race, brings a distinct and valued new perspective to our teachers council group.”

The spokesperson added that the Duran’s Northwest connection also is important. 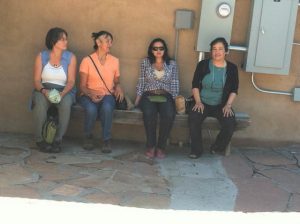 A gathering at the end of a People of Color retreat in New Mexico, in 2011. From left to right, Caerdwin Torres, Fransing Daisy, Ursula Tsosie and Bonnie Duran.

“Despite the Pacific Northwest having numerous dedicated communities of Insight practitioners, Spirit Rock has not yet had a Teacher Council member from that area,” the spokesperson said. “We are thankful to be deepening that connection.”

Duran’s father was Opelousas and her mother Coushatta, both native tribes originating from what is now Louisiana. Some of her ancestral lineage also comes from Africa.

Duran is a professor at the University of Washington School of Social Work, with a doctorate degree in public health from the University of California, Berkeley. She has done extensive health-related research work on Native American reservations around the United States, and has authored or co-authored several books on related subjects.

Her most recent, written with three other researchers, is called “Community-based Participatory Research for Health.” 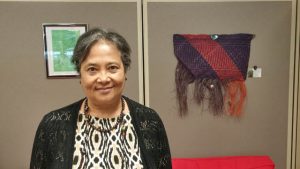 Duran combines a rigorous career as an academic, and work with the Native American community, with her dharma teachings.

Duran has participated extensively in Native American spiritual practices such as the Sun Dance, in parallel with her dharma study, and also has been taking insight meditation back to native people. She often travels to reservations around the United States, including the Navajo Nation and the Pine Ridge Oglala Lakota reservation, in South Dakota, and offers the dharma there.

I’m teaching this in Indian country” she said. “It’s an incredible huge honor, a humbling experience and the Buddha said it’s the greatest thing you can give someone.”

Duran started practicing the dharma in 1982, during a month-long course at Kopan Monastery in Nepal. She started studying with Western dharma teachers Guy Armstrong and Carol Wilson in Durango, Colorado. She later was invited by IMS co-founder Joseph Goldstein to enter the third Spirit Rock Community Dharma Leaders program, and then the Teacher Training Program.

Duran has a full life, because in addition to her academic responsibilities, she’s also teaching the Dedicated Practitioners’ Program at Spirit Rock, and is core faculty at the IMS teacher training program.

“Bonnie’s passion for connecting dharma and mindfulness with the unique lived, conditioned—and for indigenous peoples, colonized—experiences of those who come to practice, and to the teachings of the Buddha, increases accessibility,” said the Spirit Rock spokesperson, and “It offers an important lens in working with dukkha and the end of dukkha.”