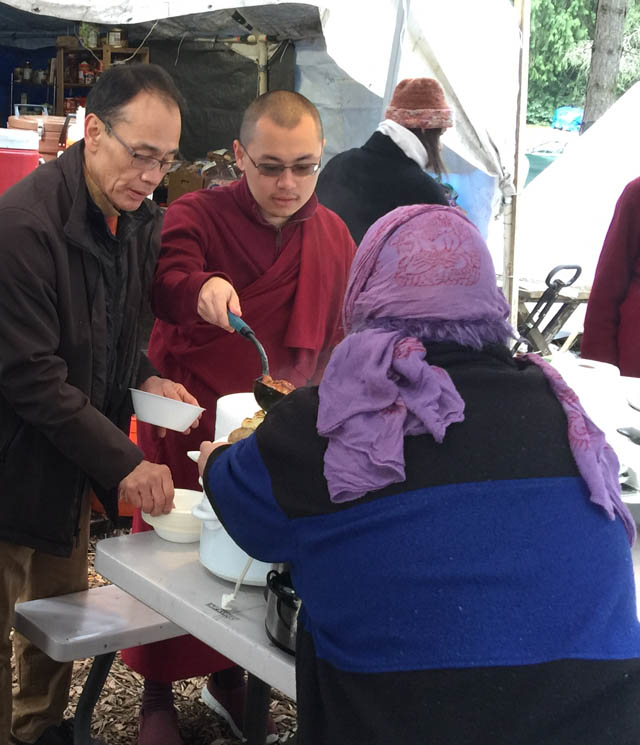 What started as a celebration of a successful Indonesia pilgrimage, by members of Sakya Monastery of Tibetan Buddhism in Seattle, turned into an opportunity to serve lunch to the 35 residents of a homeless camp.

The inspiration for this “change in lunch plans” came from teachings on bodhicitta from His Eminence Khondung Avikrita Sakya Rinpoche, head lama of Sakya Monastery. Rinpoche also encouraged people to engage in activities that help relieve others’ suffering.

The term bodhicitta has long and extensive explanations, but one aspect of bodhicitta is simply to practice compassion and to help others from the heart. Its importance on the Mahayana path is crucial.

As Khunu Rinpoche skillfully composed in “The Jewel Lamp,” verses in praise of Bodhicitta:

is bodhicitta supreme among all virtuous thoughts.
Since having it brings immediate and final happiness,
one should make every effort to produce it.” 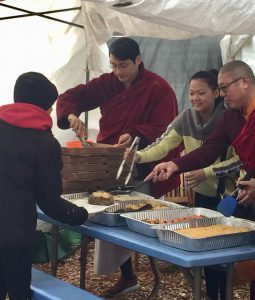 In January several members of Sakya Monastery travelled below the equator to the Indonesian island of Java, to join H.E. Avikrita Sakya Rinpoche and other practitioners for teachings and a pilgrimage to several Buddhist temples.

A key pilgrimage destination was Borobudur, a UNESCO World Heritage site, which is the world’s largest Buddhist temple as well as one of the most visited tourist locations in Indonesia. More than 50 people attended the teachings, and joined in the pilgrimage to Borobudur and the surrounding temples.

Afterward serving lunch and taking donations to Camp United We Stand, seemed like a good way to start helping the community.

People who couldn’t take off from work dropped off beautiful baked potatoes, cornbread, and fruit, or contributed to purchasing ingredients and supplies for the lunch. In addition to the lunch, people donated several items from the camp’s wish list (on their soon-to-launch website campunitedwestand.org). 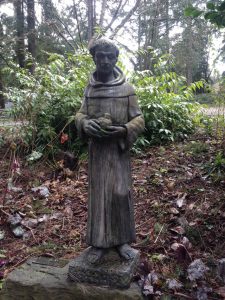 A statue of St. Francis on the path to Camp United We Stand.

Around 11:30 a.m. the lamas, monks, cooks and helpers packed up the lunch and then drove to St. Dunstan’s Church in Shoreline, north of Seattle, where Camp United We Stand currently resides.

From the St. Dunstan’s parking area we walked down the Douglas-Fir lined trail to the camp. We met with the security tent greeter, a few camp residents, an elder Basset hound named “Nina,” and then set up the lunch. Of course many residents were away at work or attending medical appointments, but we were happy to meet with the residents who were home.

We learned a lot about how Camp United We Stand functions, including its incorporation, board of directors, executive committee, a “tent and fence master,” a “kitchen master,” and many other responsibilities that each resident shares.

Committee positions and responsibilities are rotated frequently to balance the load of responsibility and leadership. This is a real community of people helping each other.

For the camp to be viable, each resident pays a monthly maintenance fee to help cover some infrastructure systems like port-a-potties. Power is generously brought in from St. Dunstan’s Church.

The tents are raised on pallets and covered in tarps to help residents, both two- and four-legged, stay dry and warm. Walkways allow residents to navigate the tent camp and check in on one another, while staying off the ground. 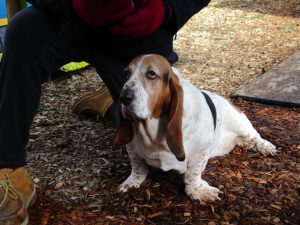 When we were there one resident was leaving to take a camp member to a CT scan appointment. Another was checking in on someone who wasn’t feeling well. Compassion was evident amongst the residents.

During a conversation with the tent and fence master, I learned that the camp is currently looking for a new home. Their extension to stay on the property ends in May. Even though they have a place to move to in August, they do not have a location confirmed for the months between May and August.

One resident mentioned how time consuming it is to find and coordinate a new location for the multi-tent camp, not to mention the act of moving itself. Imagine having to uproot everything and move every three or six months.

While we talked with the residents and learned about their community and short-term goals, one playful Siamese-colored kitty, and an older, more stoic, yellow tabby, made occasional appearances.

After a few hours we helped to pack up and store the leftovers for future use. Fortunately, the camp has a refrigerator, freezer, and microwave. We said our goodbyes and left with our hearts full. 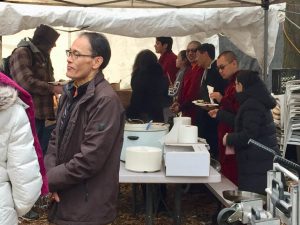 We walked back on the trail, past the cedar carving of the “First Baptized Indian” and the statue of St.Francis.

How can we do more? What should we do next? These were the take-away thoughts.

In December the Seattle Times reported that Seattle-King County, with an estimated 11,643 homeless people, has the third-largest homeless population in the U.S.

I see tents set up in medians and parks in my neighborhood every day. As a teacher I know families who “couch-surf,” as a means of staying off the street. 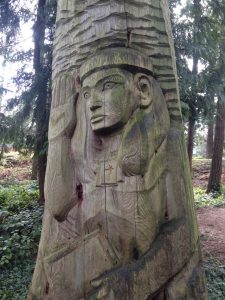 Housing affordability naturally comes to mind as a key problem. But I also think of the underlying systems in place that need adjusting for the current time: resources for individuals and families and ultimately— unconditional compassion.

A woman I met last year was homeless because she was injured in a car accident and, as a result, out of work for several weeks. Then she lost her job…and eventually her house.

Bouncing back from such trauma is not only emotionally trying but also financially devastating. In a city of mandatory credit and background checks on rental applications, and high move-in costs, someone who is already knocked down a few rungs on the housing ladder has to work extra hard to get back to a level playing field.

So how can our society shift? These are big questions for our city and county to percolate on. And hopefully some change is on the nearby horizon.

In the meantime may more people create and engage in opportunities to practice compassion. Because everyone deserves to be happy.

55
SHARES
Share
Posted Under: 2018, Compassionate Action, Spring
About the Author: Ashley Toney
Ashley Toney is a mom of two college kids, a public school teacher, and, when possible, a painter and writer. She took refuge vows in the Sakya lineage of Tibetan Buddhism in 2000, and is an active member of Sakya Monastery in Seattle.