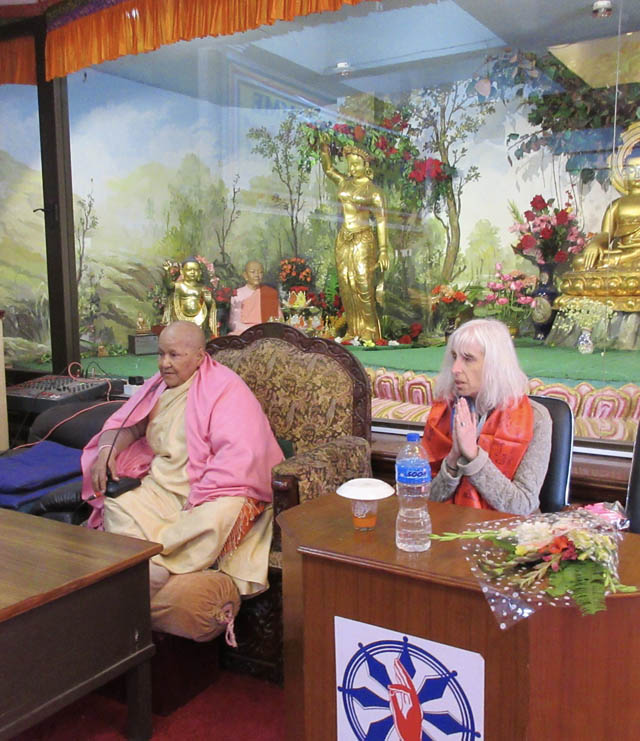 Bhikkuni Dhammawati leads chanting at the Dharmakirti Vihar prior to the talk, with a display of the birth of the Buddha in the background.
Photos by: Nabin Chitrakar, Willa Schneberg

When as a poet I taught the intimate workshop “Writing the Buddhist Poem,” at the Portland Shambhala Center in 2013, I never imagined that almost five years later I would expand on that topic in Nepal.

During my stay in Kathmandu between Feb. 4 and Feb. 12, I taught at the Dharmakirti Vihar before a large group of Nepalese Theravada Buddhists, lay and monastic. I also taught at a series of other venues.

This was quite different from the 2013 Dharma Arts festival experience in Portland, when we discussed what constituted a Buddhist poem, read a few by Gary Snyder, Jane Hirshfield and others, and then tried our hand at our own. 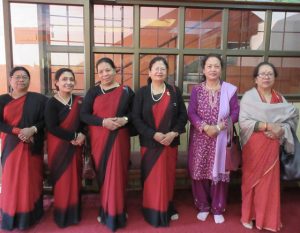 The welcoming committee of lay women greets Willa Schneberg  at the Dharmakirti Vihar.

I owe my magical Nepal experience to Nabin Chitrakar, who is a poet, Buddhist, and secretary to the cultural preservation organization Nepal Bhasa Parisad. Chitrakar, a member of the Dharmarkirti Vihar, invited me to come to Kathmandu as a poet-in-residence, and connected me with the monastery.

I’m also grateful to the Regional Arts & Cultural Council, which provides professional development grants to artists who live in Clackamas, Multnomah and Washington counties, all in Oregon. 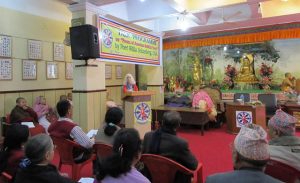 The culmination of all my presentations, on the last Saturday before I returned to Portland, was talking about “The American Buddhist Poem” at Dharmakirti Vihar, founded in 1965 by Bhikkhunī Dhammawati. A nun, and abbess of the nunnery and monastery, she is now 84 years old.

Dhammawati immersed herself in the dharma at Khemarama Nuns’ Study Center in Yangon, Myanmar, and in 1962 received the highest degree of Dhammachariya. This is one who lives the dhamma and/or teaches dhamma by example.

Since then Dhammawati has published more than 50 books. In 1988 she traveled to Hsi Lai Temple in California to receive full Bhikkhuni ordination in the Chinese Dharmagupta lineage, becoming the first Nepalese Bhikkhuni in recent history to do so.

And this is the venerable personage I would be sitting next to and speaking in front of! I found the task a little less daunting when I learned English was not her language of fluency. 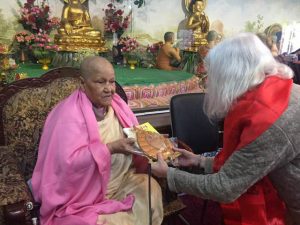 Arriving at the vihar I was greeted by lay women, many of whom were wearing deep-red Nepalese-style saris with black trim. They were lined up just inside the monastery gate with a bouquet of flowers and an orange-red scarf for me. They placed the scarf around my neck, and we bowed “namaste” to each other.

Bhikkhuni Dhammawati had not yet entered the large hall. I sat down on a small padded folding chair next to the very cushioned chair of Abbess Dhammawati. Behind were life-sized dioramas of the Buddha’s birth, the Buddha surrounded by disciples teaching the four noble truths, and a depiction of his death.

As soon as Dhammawati entered the sanctuary, we all stood up. She was followed by a retinue of Buddhist nuns who live at the vihar with her. She led the assembled in a chant, I believe in Pali, the language of early Buddhism.

Sangha member Arun Siddhi Tuladhar served as the master of ceremonies. He asked me to light what he called “the Buddha lamp,” and then there was more chanting with Venerable Dhammawati. 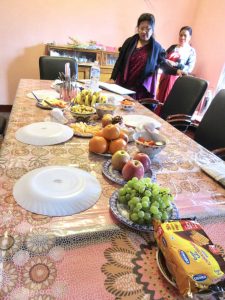 Most of the introductions were in Nepali or in Nepal Bhasa. The secretary of the Dharmakirti Vihar Conservation Trust spoke in English, and she said that part of the trust’s mission is to bring foreign Buddhist scholars to speak. Since I am not a member of that esteemed company, I felt even more honored to be invited.

Nabin Chitrakar, who organized all my appearances, explained that his introduction had consisted of outlining my poetry chops (experience),  and discussing how we met.

He told participants he heard me read at the Eastside Freedom Library, an arts and social justice venue in St. Paul, Minnesota, where his daughter lives. We began an email correspondence that evolved into how I might bring my flavor of poetry to Kathmandu.

Standing at the podium, before I began talking about my sense of American Buddhist Poetry I said that I was a Buddhist in the Shambhala tradition, had taken the refuge vow, and was in a bodhisattva study group. I knew it was impossible to truly communicate through language the depth of gratitude I felt to Bhikkhuni Dhammawati, members of the vihar, and to Nabin Chitrakar, who had given me the opportunity to speak in their sanctuary on a Saturday afternoon in February.

I launched in by tackling the question of what is the American Buddhist poem. I referred to poet Gary Snyder, who in his introduction to the anthology “Beneath a Single Moon: Buddhism in Contemporary American Poetry,” said Buddhist poems are vehicles to express “impermanence, no-self, the inevitability of suffering, interconnectedness, emptiness, the vastness of mind and the provision of a way to realization…” 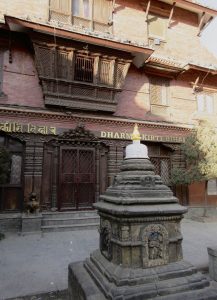 The intricately carved entrance to the Dharmakirti Vihar in Kathmandu.

Snyder is an American Zen Buddhist and environmentalist, whose poems blend physical reality with precise observations of nature.

I spoke about haiku, how it was first written by Buddhist monks in Japan, and that it is a spiritual art of being in the moment, capturing impermanence and no-self. Many contemporary American haiku poets no longer conform to the 5-7-5 form, and believe that 11 syllables in English is equivalent to 17 in Japanese.

I explicated a poem by haiku poet Patricia Donegan, a student of Chogyam Trungpa Rinpoche, and another by Snyder.

I shared “A Blessing for Wedding” by Jane Hirshfield, who studied at Green Gulch Farm, a Zen center north of San Francisco, and who received lay ordination in 1979.

“Today” is the word that begins each line of much of this poem. The first line reads, “Today when persimmons ripen/.”

We also explored two poems by non-Buddhists, who I believe share Buddhist sensibilities: Mary Oliver and William Stafford. Oliver’s poem “The Buddha’s Last Instructions,” reveals the direct and immediate way in which she responds to the natural world’s glory and transience:

Even before the sun itself

hangs, disattached, in the blue air,

I am touched everywhere
By its ocean of yellow waves.

I ended my talk with “You Reading This, Be Ready,” by Bill Stafford, who lived in Lake Oswego, Oregon, and died in 1993. He was the Oregon Poet Laureate and the U.S. Poet Laureate. Here is the last stanza:

What can anyone give you greater than now,

starting here, right in this room, when you turn around?