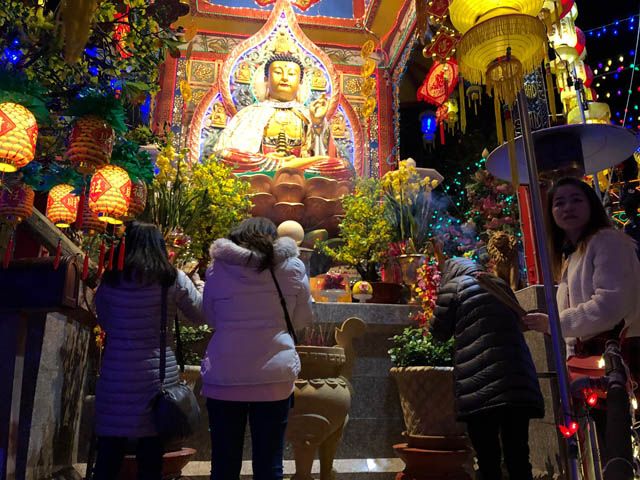 With incense, prayers and blessings, amidst colorful lights, banners and lanterns, people of many cultures ushered in the Vietnamese Lunar New Year at Dia Tang Temple in Lynnwood, Washington.

The Feb. 15 event marked about 20 years at this sprawling hillside property north of Seattle.  By 9 p.m. cars were squeezing into the last few empty spaces in the parking lot. By the end of the weekend about 1,000 people would visit the temple, said William Huynh, a volunteer on security detail.

That night’s festivities included a flower offering to the Buddha and a blessing by head monk Master Thich Nhut Truyen, along with gift giving. The event ended at 2 a.m. Friday, and the temple opened again at 9 a.m., as it did for the following two days. The Lunar New Year’s festivities ended at 5 p.m. Sunday Feb. 18. 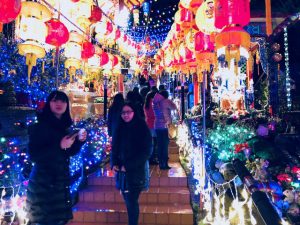 People walked the stairway, visiting shrines along the way.

The next big event was planned for March 4, the day of the first lunar full moon ceremony. This event was to feature a dragon dance, medicine Buddha sutra reading, and a candle offering and blessing. Events in April include a Kuan Yin ceremony and Buddha relic ceremony, followed by a celebration of the Buddha’s birthday in May.

During the February New Year’s events, people of Vietnamese ancestry, carrying out traditions from their own culture, were joined by curious people from other backgrounds. Many of the latter smiled from the experience of their first Vietnamese Lunar New Year celebration, also called Tet.

“The whole idea of Vietnamese New Year is that people walk around and visit temples, and that’s what’s happening here,” said Loc Huynh, a monk who invited me to join the festivities.

In the main temple people lit candles, bowed and prayed. They made offerings to the Buddha, took pictures, and greeted each other. Statues of Amitabha Buddha and four bodhisattvas stood resplendent in golden color. 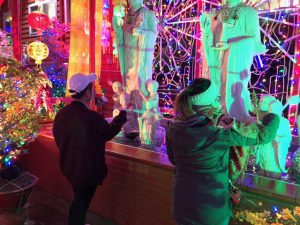 People washed Buddhas outside the main temple as part of the New Year festivities.

Outside, along a steep stairway beside a stream decorated with figurines and lanterns, Meagan, a blonde-haired woman who preferred to give only her first name, took in the scene.

“It’s my first time at a Buddhist temple. I think it’s beautiful,” she said. “It’s extremely colorful, especially inside the temple. It’s quite extravagant.”

Nearby was Linh Truong, who had come to Seattle from Vietnam 12 years ago and had just graduated from pharmacy school. She was celebrating the day with her friends, Tran Tran, Khanh Tran and Katherine Tran.

“In our tradition, we go here. You pray and get your fortune for the New Year,” Truong said. 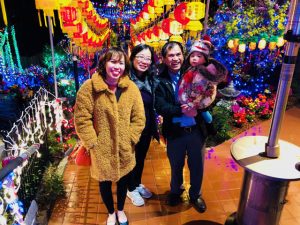 “I really like it,” she said of the temple. “I used to visit (during other holidays). This is my first time for New Year, and I really like it. It looks amazing. It makes me less homesick.”

Higher on the hill was a long row of marble Buddha statues. Many people were holding sticks of incense and bowing in procession in front of each statue.

In a brightly lit shrine high on the hillside, people practiced a form of divination. They pulled numbered sticks from a tube-shaped container, and then dropped half-moon -shaped “jiabei” blocks. If the blocks landed one up, one down three times, they took a printed piece of paper associated with the number on the stick.

“You should try it,” smiled one man, as he left the temple with his paper in hand.

“It’s not a ‘fortune,’” explained Hailund Praseuth. “It’s a poem. It answers the question you asked.”

Her friend, Bruce Johnston, said that he had celebrated Vietnamese New Year at a temple in Vancouver, B.C., where he used to live. 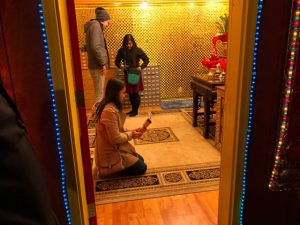 People seeking insight into the new year, through a form of divination.

“What’s impressive about this one is the lights,” he said. “They’re incredible. And the location, being built on a hill, is grand like this. It’s quite sprawling.”

With a stick of incense in hand, a woman who goes by the name of Paramjyoti , or Jyoti for short, was standing outside a shrine of Guan Yin, the bodhisattva often referred to as the “Goddess of Mercy.”

Dia Tang Temple, whose more formal name is Dia Tang Vien Quang Tu, grew out of the Quan Am Temple. This temple was founded in Seattle in 1986 by four brothers and two cousins, all of whom ordained as monks.

When the membership outgrew that location, the monks saw potential in what was then a weedy 3-acre property in Lynnwood. Monks and members celebrated the temple’s public grand opening in 1998. 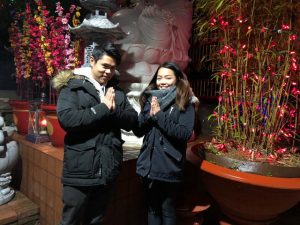 Jonathan Liang and Giang Nguyen appreciated the marble statues. “I’ve never seen anything like it. All of them are really clean. It’s just beautiful!” Liang said.

The temple is a remarkable example of Mahayana Buddhist culture, with its 2,800-square-foot main temple, a 900-square-foot lotus temple on the hillside, and meandering paths and stairways to many shrines and statues. All were all obviously designed and built with care, not far from the hustle-bustle of Interstate-5 and suburban Alderwood mall.

Monk Loc Huynh said 10 monks and one nun are associated with the temple now. They live in a monastery in north Seattle and come to the temple on weekends and holidays. Membership in the temple is informal, he said, with people coming and going at will.

The temple commemorates Ksitigarbha, a bodhisattva often referred to as the “Earth Treasury.” Huynh said Ksitigarbha’s vast embrace accepts all suffering, in the great compassion of one who has vowed to work for the enlightenment of all beings.

He said the atmosphere at the temple is informal. Members welcome everyone, but they don’t seek to convert anyone.  Compassion stands above doctrine. 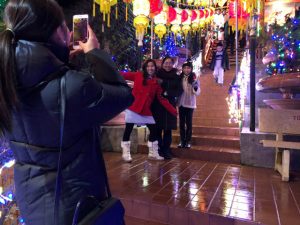 Lunar New Year was the occasion for many happy pictures at Dia Tang Temple.

“Buddhism isn’t a religion. It’s a way of living. It removes all labels,” Huynh said. “There is only one goal when you get into it. The goal is to liberate yourself.”

“With Buddhism, it’s not about proselytizing. It’s more of an open door policy,” he  said. “The teaching is here. If you want to come, come.”

More information about Dia Tang Temple, including an event calendar, can be found at http://diatangtemple.org/

0
SHARES
Share
Posted Under: 2018, Dharma Healing, Arts, Featured On Home Page, Spring
About the Author: Bob Baumgartner
During the week, Bob Baumgartner works as service manager for a fitness company. On weekends he often enjoys the company of friends at the Seattle Meditation Center.