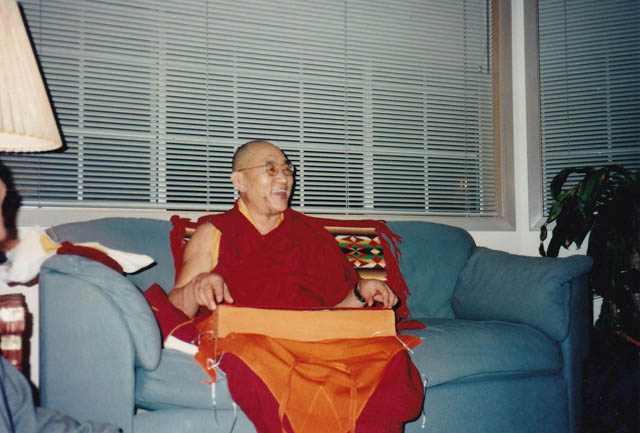 Since 1985 DFF’s faces and locations have changed, but the mission to propagate authentic Mahayana Buddhism, and the perseverance to fulfill that mission, remain as strong as ever.

On a recent Sunday morning eight students gathered in a Seattle home for the first meeting of a group to discuss the Buddhist concept of emptiness. 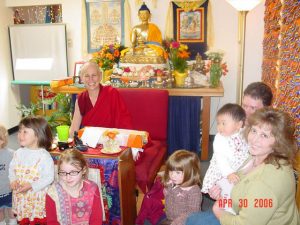 Some in the circle were old friends, others were meeting for the first time. As they named their reasons for joining a few consistent themes emerged. They wanted to connect with spiritual community amidst the challenges of modern life, to find a way to de-stress.  Most also wanted to fulfill the dharma potential taught by Shakyamuni Buddha, to walk the bodhisattva path and to inspire others to wake up and free their minds.

Since 1985 seekers of wisdom, or even of just a little less stress in their lives, have joined together in living rooms and DFF-rented spaces to hear qualified teachers sponsored by DFF.

Now a small core group of volunteers is continuing this tradition, hosting major public talks, day-long retreats, and most recently a student-led class.

Here are some of the most significant DFF events of the last three years: 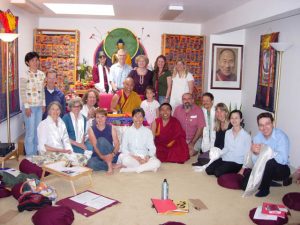 On the calendar are another evening with Venerable Robina at the Seattle Public Library, regular teachings with Yangsi Rinpoche, and a series of events with Venerable Thubten Chodron in October 2018.

DFF’s activities these days are in a sense its third incarnation, making it unusual among large Buddhist groups.

The history of DFF includes its origins supporting Ven. Gen Lamrimpa, followed by another period supporting Ven. Thubten Chodron, and since 1995 offering teachings with guidance from Yangsi Rinpoche. All three are of Tibetan origin.

Alan Wallace and others first founded DFF in 1985 to support teachings from Gen Lamrimpa.

Genla, as he was affectionately called, was an accomplished Tibetan meditator who spent much of his time practicing in solitude in a one-room mud and stone hut, in the forest above Dharamsala, India. His areas of expertise were shamatha (concentration meditation), Kalachakra tantra, and the Lam Rim genre of teachings. 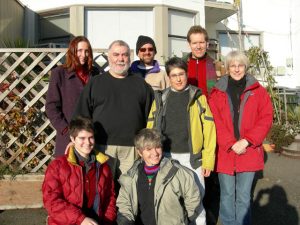 The latter were in the lineage of Je Tsong Khapa, the 13th century Tibetan founder of the Gelug school of Tibetan Buddhism.

Genla returned to Seattle to continue teaching to a growing following of students. When asked to return again he replied that he had shared everything he knew, and that now it was time to put his teachings into practice.

And so, when it became clear that Genla was not to return to America (in this life), many of his students at DFF continued practicing on their own or in small groups, while others invited Venerable Thubten Chodron to come and teach. Coincidentally, Wallace and Venerable Chodron were acquaintances in junior high school in southern California. 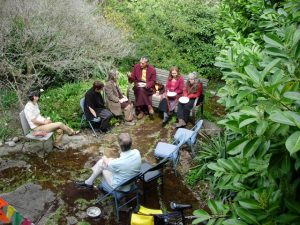 Yangsi Rinpoche at community potluck in Seattle’s Central District in 2009.

When Venerable Chodron arrived in Seattle she brought with her the deep knowledge and compassion of her teachers, the late Lama Thubten Yeshe, and Lama Zopa Rinpoche. And she also brought a new challenge to DFF: she was a homeless nun without a conventional job, supporting herself on dana (literally generosity). She needed a place to live.

DFF rented a one-bedroom cottage in the Green Lake neighborhood of Seattle and students met in the living room for a few years for teachings. But gradually it became clear the space was too small, and afforded Ven. Chodron no privacy to do her practice, to prepare for the many classes she was teaching, or to provide the solitude she needed to write her many books.

So DFF moved west across town again, renting a small apartment in Seattle’s Magnolia neighborhood for Venerable Chodron, and an office space in the back of the Magnolia post office for the teaching and community center. 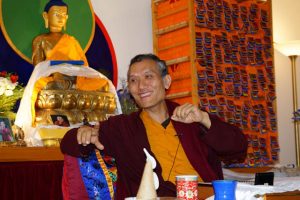 During this period DFF continued to grow, both in members and activities. Major undertakings included organizing the first “Life as a Western Buddhist Nun” conference in Dharamsala, India (summarized in the book, “Blossoms of the Dharma”).

The group also sponsored three of Ven. Chodron’s students in Beijing, China, to obtain student visas in order to study Buddhism in the U.S. At least two of those students went on to complete advanced degrees, and are currently collaborating on a project for the Foundation for the Preservation of the Mahayana Tradition, to translate into Chinese Je Tsong Khapa’s “Lam Rim Chenmo,” translated as the “Great Treatise on the Stages of the Path to Enlightenment.”

Venerable Chodron’s dream to establish a monastic community in America became a reality in 2003 with the founding of Sravasti Abbey, in Newport, Washington, north of Spokane. 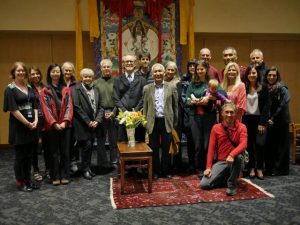 Geshe Thupten Jinpa, teaching at the University of Washington’s Kane Hall in 2015.

With her blessing, in 2005 DFF requested Yangsi Rinpoche to guide the organization, and he humbly accepted out of his wish to be of benefit.

Rinpoche is a fully trained geshe, the equivalent of a doctorate in the Tibetan monastic system. He is author of “Practicing the Path,” a commentary on the “Lam Rim Chenmo.”

But DFF board members soon realized that without a resident teacher offering weekly teachings, sustaining interest in the teachings required time and substantial financial commitments and fundraising to maintain a dedicated center. Rent expenses were rapidly drawing down the group’s bank account and the board decided to close DFF’s rented space, then in Seattle’s International District.

0
SHARES
Share
Posted Under: 2018, Dharma Education, Spring
About the Author: Jordan Van Voast
Jordan Van Voast is a member of the Tzu Chi International Medical Association, and also serves on the board of directors of the Dharma Friendship Foundation in Seattle. He is co-founder of CommuniChi, a community acupuncture clinic in the Mount Baker neighborhood of Seattle.