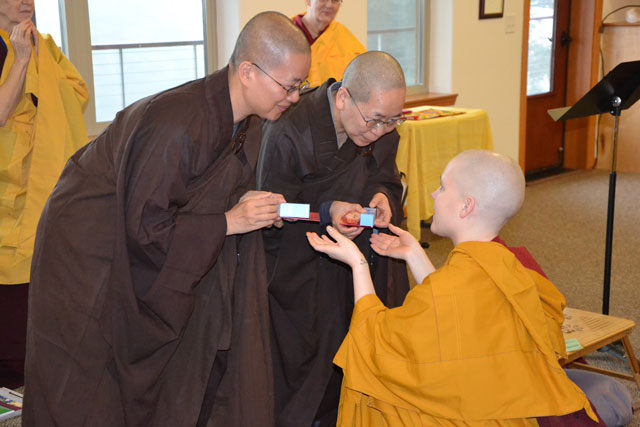 In an important step for Western Buddhism, 49 nuns from around the world gathered early this year at Washington state’s Sravasti Abbey, to deepen their understanding of monastic guidelines.

The 16-day program, called “Living Vinaya in the West,” was an experience in learning and living the Vinaya. This is the set of instructions or advice the Buddha gave 2,500 years ago to guide, govern and support harmonious nuns’ and monks’ communities. The program was from Jan. 22 to Feb. 8. 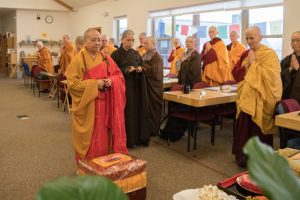 Venerable Master Wuyin prepares to bow to the Buddha during the opening ceremony.

Sravasti Abbey founder and abbess Bhikshuni Thubten Chodron also taught from her experience in establishing the Vinaya in an American monastery.

Sravasti Abbey is one of the first Buddhist monasteries in the U.S. to form a bhikshuni sangha community and to adopt the monastic rites prescribed by the Buddha.

Nuns from three Buddhist traditions—Chinese Mahayana, Tibetan, and Theravada—came from Europe, Asia, and South America, as well as the U.S. and Canada, to attend the course. About half of these nuns have no opportunity to live in monastic community, and several others are in the early stages of founding nuns’ communities.

Joy was the main mode of being together during the training. Laughter, sincerity, transparency, celebration and discipline co-existed amicably within the harmonious sangha, literally drawn from 10 directions to learn together. 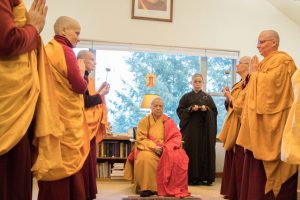 At the opening ceremony, the Sravasti Abbey sangha makes a formal request to the Vinaya Master for teachings.

The “Living Vinaya in the West” course was historic in several ways. It was likely the first such training offered in the United States for Western nuns. In addition, it featured the first ordination of a novice nun to be conducted by an all-Western, English-speaking sangha in the Dharmaguptaka tradition practiced at Sravasti Abbey. Previous ordinations at the abbey have included the support of senior monastics from the Chinese Buddhist tradition.

Course instructor Venerable Master Wuyin has been a Buddhist nun for more than 60 years. She has dedicated her life to improving the status of fully ordained nuns, first in her native Taiwan, but now around the world.

At the age of 77 Master Wuyin traveled halfway around the world specifically to teach this course at Sravasti Abbey. She wanted to observe and support the abbey’s growing bhikshuni sangha community, and to train and inspire nuns from other places to establish nunneries themselves. Venerable Master Wuyin’s experience during the course gives her hope, she said, for the future of monastic communities in the West. 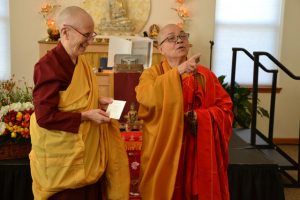 Why is this important?

Monastic communities are essential for the long life of the dharma, the Buddha’s teachings and practices. The Buddha stated that where a community of four or more fully ordained monks or nuns practices the Vinaya, his teachings would live long in the world. Sravasti Abbey was founded on that basis.

Buddhism is still new to our country and the dharma teachings are extensive. Western practitioners can learn much from the Asian lineages that have preserved them. In particular, Buddhist monasticism is little known or understood in the West, and the teachings on how monks and nuns can live in harmonious communities have not been widely translated or disseminated. These teachings — preserved in the Vinaya — contain detailed instructions from the Buddha himself. 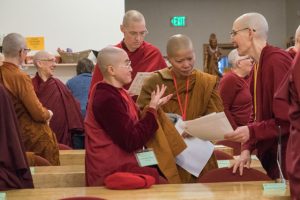 Nuns from three Buddhist traditions delight in the chance to share together.

The term Vinaya is usually defined as “the Buddhist monastic code of ethics.” It’s an accurate but limited characterization in that the Buddha’s Vinaya teachings are rich and vibrant. They include guidance on everything from how to handle monastery resources to methods for resolving disputes. Master Wuyin also emphasized the role monastics must play in modern society by being of service in many different ways.

Venerable Karma Lodro Gangtso, an American nun speaking on behalf of the Tibetan Buddhist nuns who attended, was touched by the Buddha’s care for the nuns and monks directly under his guidance.

“We learned that the stories about monastics from 2,500 years ago are still alive today, that those bhikshus (fully ordained monks) and bhikshunis were just like us,” she said. “The way Master Wuyin taught this course made it felt like they were here, like they lived yesterday, and not in a distant far-away land. The course made the Vinaya teachings feel so relevant.” 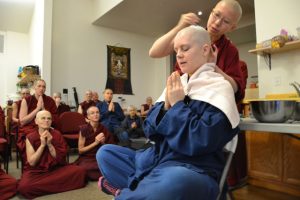 All the sangha look on as the abbey bhikshunis, one by one, take a turn at the head shaving, the first step as Rebecca Bradley becomes Venerable Thubten Lamsel.

Her comments, along with talks from several other nuns, are on the Sravasti Abbey YouTube channel. Reflections from some of the guests who attended are on Sravasti Abbey’s website.

According to Master Wuyin, the Vinaya teachings must be lived to be understood. Through teachings, video, discussion groups, skits and active participation in some of the Vinaya rites, the Luminary International Buddhist Society faculty brought the Vinaya alive for abbey residents — where the rituals are practiced — as well as for the guest nuns. 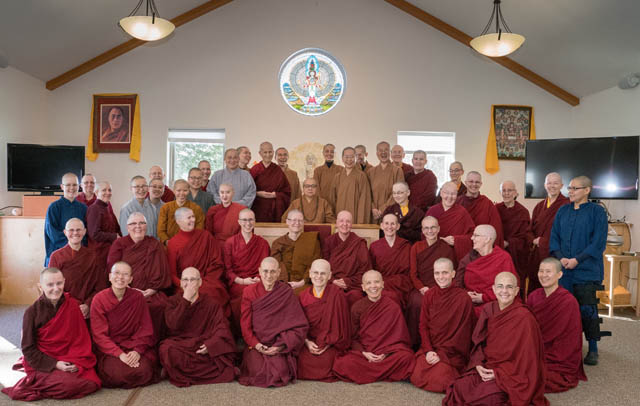 The joyful nuns of the Living Vinaya in the West course at Sravasti Abbey, January 22 to February 8, 2018.

In the “Mahaparinibbana Sutta,” among other citations, the Buddha emphasized the importance of the four-fold assembly—male and female lay Buddhist practitioners, and male and female Buddhist monastics. All have a responsibility to “walk in the path of the dharma,” and are necessary for the teachings to survive and thrive.

With 1.2 million Buddhists in the United States, according to a 2012 Pew Charitable Trust report, the Buddha’s teachings to alleviate suffering and bring happiness are clearly taking root here.

Sravasti Abbey is encouraged that support for Buddhist monasticism is also growing. We rejoice in the burgeoning monastic communities in the West, and offer tremendous gratitude to our teachers in the Taiwanese and Tibetan Buddhist communities who have helped us learn and grow.

At her departure, Venerable Master Wuyin promised to return to Sravasti Abbey soon to encourage our monastic efforts to serve society. As we assess the discord in the American public discourse, we rejoice at learning ways monastics can be more effective in bringing Buddha’s teachings on love, compassion, and wisdom to all who can hear them.

0
SHARES
Share
Posted Under: 2018, Dharma Education, Spring
About the Author: Bhikshuni Thubten Chonyi
Bhikshuni Thubten Chonyi is a fully ordained nun practicing in the Tibetan Buddhist tradition. A student of Venerable Thubten Chodron since her tenure at Dharma Friendship Foundation in  Seattle in the 1990s, Venerable Chonyi lives and trains at Sravasti Abbey in Newport, Washington. She has also served on the Northwest Dharma Association board of directors.