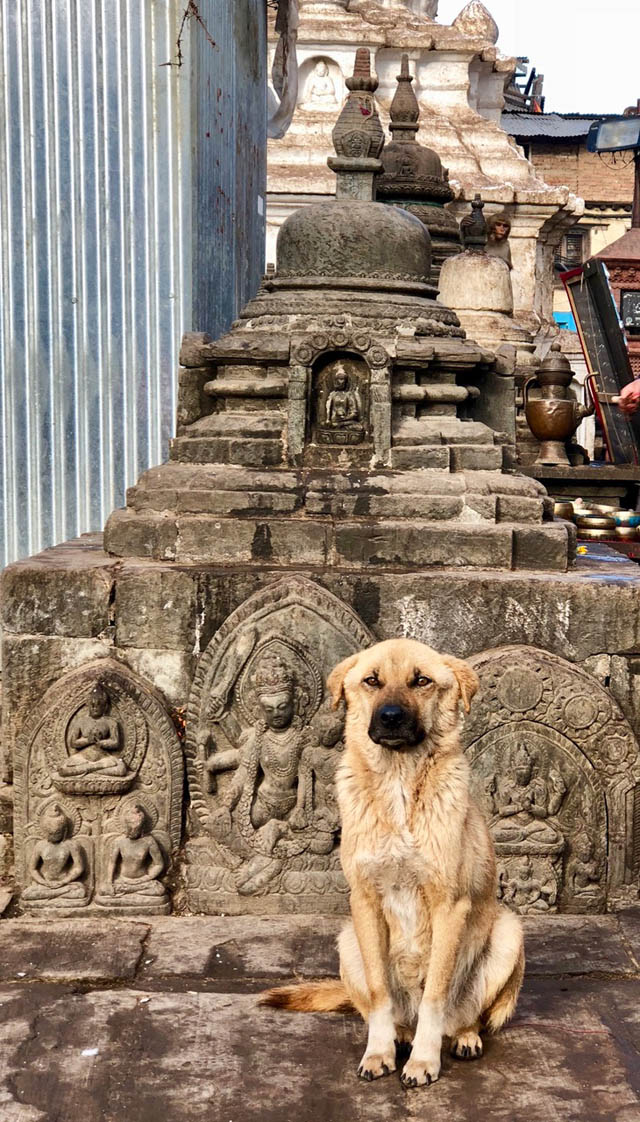 A street dog in Nepal, one of thousands across the region.
Photos by: Jessika Ava, Akshay Prakash, Eileen Weintraub

This fall I was blessed with many opportunities to help animals during my trip to Nepal and India, as founder and director of Seattle-based Help Animals India.

The December trip to South Asia was my seventh since I began helping India’s animals.

Help Animals India’s mission is to help save animals and support the people who do so.  We have close relationships with the most promising animal welfare organizations, all of which are underfunded. We build capacity through education, consultation, networking, and financial support. 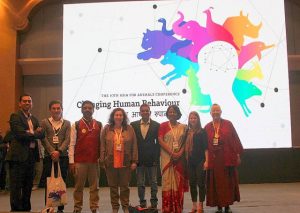 Help Animals India representatives in Kathmandu, for the Asia for Animals conference.

A highlight of the trip was the 10th Asia for Animals conference in Kathmandu, which attracted animal advocates from around the world.

Asia for Animals invited several of our partner group representatives to attend and speak, providing an opportunity to learn the latest work in Asia animal welfare and to plan for future projects.

The conference attracted many government officials, and led to progress for Asian animals on many fronts

During the trip I also traveled to India to visit groups we raise funds for. Between Nepal and India I visited six shelters, to better understand their support needs.  These shelters house animals who have nowhere else to go, including bears, monkeys, dogs, cats, cows, buffaloes, camels, horses and more! All the rescued beings were wonderful to meet.

So many animals, particularly disabled animals, need more love and support. My heart broke to see their plight, but the shelters we support provide a ray of hope, as the animals receive lifetime care.

The new millennium has already made great progress against discrimination based on race, sexual orientation and gender, while opposing sexual harassment. But how about the other species on our planet, animals, who suffer in countless ways due to the actions of humans! 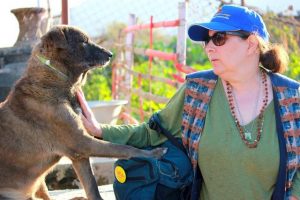 Eileen Weintraub with a rescued dog at Sneha’s Care sanctuary in Nepal.

You simply cannot separate Nepal from Buddhist dharma, and at the conference in Kathmandu we were honored to have several Buddhist speakers:   Chu Tseng-Hung, a monk from Taiwan; Khenpo Chonyi Rangdrol, abbot of Trangu Monastery in Nepal; and the world-famous Matthieu Ricard, all spoke about the rights of animals.

Ricard is a writer, monk, philosopher and humanitarian, who has been called “the happiest man on earth.” 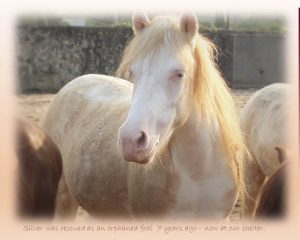 He was given that title as he participated in a scientific experiment that measured his brainwaves.  Ricard says if you want to be happy you should strive to be benevolent, which will not only make you feel better but also make others like you more.

For Ricard benevolence also very naturally extends to the most oppressed among us — the animals.   His recent book is “A Plea for the Animals” and I filmed his conference talk, which you can see here.

After the conference I toured holy areas of Nepal I had heard about for decades, including the Boudha Stupa, Swamabunath Stupa, and Pharping.  In Pharping I had the extreme good fortune to visit Guru Rinpoche’s cave, the Self-Arising Tara Shrine, and vegetarian Chatrul Rinpoche’s shrine. 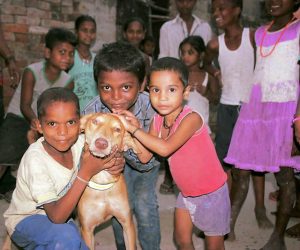 Next we had an extraordinary opportunity for Help Animals India and our partner group, Just Be Friendly (JBF), to discuss animal protection in-person.  In particular we focused on reducing the Northeast India dog meat trade.

As this horrendous activity increases, our work is of utmost importance.  (Sadly, after the conference, JBF faced yet another rescue of 42 dogs from the meat trade in Assam, India.  We are helping by building new kennels to house the traumatized dogs, and to fund medical care and their re-homing.)

In Bangalore I was lucky to spend time one-on-one with one of the sweetest rescued elephants, 55-year-old Aneesha, a victim of the logging and temple industries. Her legs are permanently damaged due to years of hard labor. 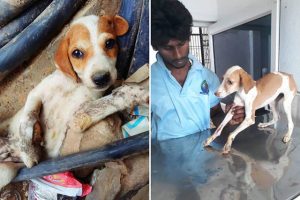 Dog Cherry, before and after rescue in Varanasi.

Thanks to our donor support, Aneehsa is now living a happy life in sanctuary.   You can read more about Aneesha and captive elephants in India here.

Here are some of the organizations we support:

People for Animals Chennai continues to do outstanding work to rescue cows and buffalos from slaughter, and cats from the horrific cat meat trade. They also provide a life-long home to injured street dogs, abandoned working equines, goats rescued from slaughter, and any other needy animal who crosses their path.

Thanks to donations we’ve been able to provide PFA Chennai with a new, much-needed animal ambulance to rescued animals from the street, as well as food for the shelter animals. Dr. Shiranee Pereira, the director, has also been instrumental against animal testing throughout India. 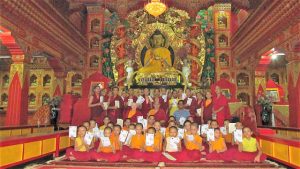 Educating monastics about how to love animals more.

This sweet video is a rare opportunity to see Dr. Shiranee at her work in the Red Hills, shelter, which is free of chains or cages.

Karuna Society For Animals and Nature is inspiring us all by building a new 18-acre wildlife rescue center. Think of the impact it will make for generations, as there is no other protection for these wild or domestic animals in this part of South India.  And furthermore, Karuna grows organic produce to sell to local people and provide an income for the shelters.

Ms. Clementien Pauws gave up a more comfortable retirement in her native Holland to come to India build a future for the animals and the people who love them.

Compassion Unlimited Plus Action, or CUPA, supports seven centers throughout Bangalore. Animals are brought in daily to the centers, including former working horses with shocking injuries suffered after abandoned to the street. The CUPA animal shelters were started by a group of dedicated woman and we are honored to be able to help them in their lifesaving activities!

Varanasi for Animals provides support for street animals in one of the oldest cities of the world, Varanasi, also called Benares.  Help Animals India has started the VFA clinic against all odds and worked diligently to help improve it by adding more kennels, staff training, and birth control for more street animal to stop suffering at the root.

Sarnath Animal Welfare protects animals in Sarnath, the place where the Buddha first turned the wheel of Dharma, and which is now a Buddhist pilgrimage center.

Despite the focus on Buddhist compassion there, no help was available for suffering street animals, specifically dogs until Help Animals India became involved. The Sarnath project has reduced the dog population, and also encouraged people to be kinder to animals. We just sponsored our fifth annual animal birth control and educational camp.

With gratitude on behalf of India and Nepal’s animals and the people who love them – thank you for your interest in helping animals whether near or far!

To learn more about the work Help Animals India is doing, please visit:

251
SHARES
Share
Posted Under: 2018, Compassionate Action, Spring
About the Author: Eileen Weintraub
Eileen Weintraub took Tibetan Buddhist refuge in 1976 and has been extremely fortunate to meet and practice with many of the great lamas of our time.  She is a lifelong animal advocate/rescuer and in 1998 she began supporting animal protection groups in India. During her trips to India Weintraub found many groups that were helping animals despite having few resources, so in 2008 she founded Help Animals India to give them better financial support.

Because of this work, Weintraub won the 2016 Unsung Vegan Heroes Award from The Pollination Project.