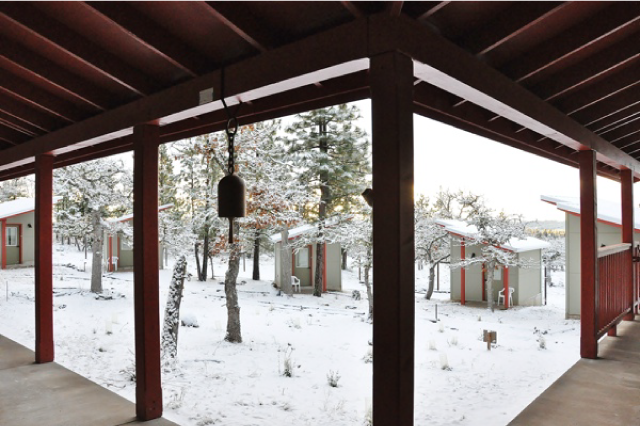 After years of preparation, 12 people will enter into three-year retreat at Ser Chö Ösel Ling this April 4, a momentous life turning for each of these individuals. The 12 will be entering the long retreat, a period characteristic of Tibetan Buddhist practice, only after long internal and external preparation. They will be practicing at a just-completed facility, near Goldendale, Washington.

Family, friends, visiting lamas, and sangha members will gather at the beginning of the retreat to celebrate this momentous occasion in the lives of the retreatants. Also celebrating will be the entire membership of Portland-based Kagyu Changchub Chuling (KCC), the Vajrayana Buddhist community that has worked toward this moment for over 15 years. 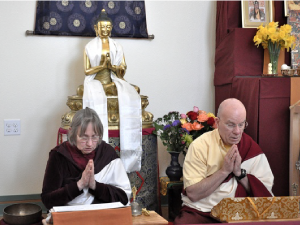 Lamas Tara Goforth and Michael Conklin will be Retreat Masters for the Shangpa Kagyu three-year retreat, with a start date of April 4.

The 10 women and two men will step into a cloistered life, engaging in contemplation and meditation practices handed down through the Shangpa Kagyu lineage of Tibetan Buddhism. In order to fully accomplish these practices, they will live as nuns and monks for three years and three months.

The preparations for this retreat were described in a story in the Spring, 2014 issue of Northwest Dharma News.

In that story, Associate Teacher Bill Spangle described life on long retreat in depth, illuminating why KCC has dedicated so much to making three year retreat possible in the Northwest.

“Without some people going deeper into the practice, and teaching from that experience,” he wrote, “it was clear that over time, the dharma would lose depth and vitality, moving from lived experience toward a tradition resting only on intellectual understanding and the reputation of previous generations.” 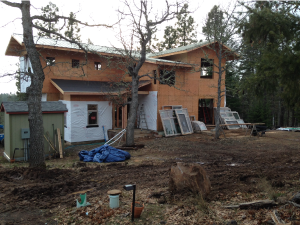 Lama Michael Conklin from KCC, and Lama Tara Goforth from British Columbia, will be retreat masters for the three years.

Lama Tsang Tsing, who was retreat master for Lama Michael’s three year retreat, will also provide teaching and guidance. With assistance from additional visiting lamas, they will conduct a day of ceremonies culminating with sealing the retreatants into the cloisters at Ser Chö Ösel Ling, also called SCOL, on April 4.

Retreatant Kathleen Benz, who turns 70 in March, says one of her reasons for aspiring to go on long retreat is curiosity.

She is also curious how life will be when no one is depending on her. “What would I be if no one depends on me? Who am I?” 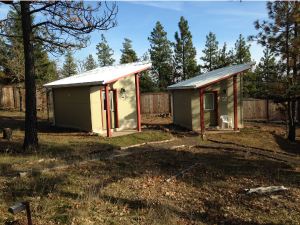 The retreat cabins, each decorated with one of the eight auspicious symbols, created by KCC volunteers.

Benz also relates to Alan Wallace, a well-known Western teacher primarily in Tibetan tradition, who says it takes 10,000 hours to hone any skill, such as music, medicine, or athletics, enough to become exceptional at it.

“Compassion and insight are skills that can be cultivated in much the same way,” Benz said.

Three year retreat is a rare opportunity to do this. 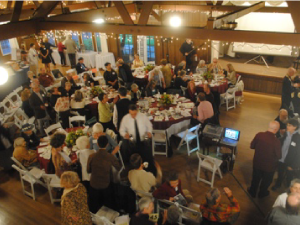 The “Raise the Roof” event on June 13th, to celebrate Lama Michael’s birthday and complete the 14-year capital campaign for the retreat center.

Since Bill Spangler wrote the article in Northwest Dharma News, which we urge everyone to reread for its beautiful description of the land and facilities at SCOL as well as its explanation of long retreat, KCC has worked all year to complete the final building required for long retreat and put the finishing touches on the cloisters.

When KCC’s one year retreat concluded last spring, the one structure remaining to be funded and built was a residence for the stipend volunteers who provide for the wellbeing of the retreatants, attend to the dharma teachers, and care for the facilities and the natural landscape at SCOL.

On June 13, 2014, in a rousing event called “Raise the Roof,” sangha members and friends showered Lama Michael with respect and affection in celebration of his 70th birthday, and gave him a big gift, net event proceeds of $160,000.

With “Raise the Roof” as the culmination of a capital campaign that lasted well over a decade, sufficient funds were in hand to meet the projected costs of the residence, though some additional funds could be needed should unforeseen circumstances arise during construction.

That Sept. 24  KCC broke ground on this final building of the retreat facility and construction is now underway.

Planning for the quarters began by identifying principles about what would support stipend volunteers during the hard work of long retreats—principles like privacy, meditation, and community. We then worked on a design that was affordable and feasible that would support these principles.

It is, more than anything, an investment in the stability of the lives of those who serve at SCOL, with the hope that that will transfer into them being able to support the retreatants with stability.

The innovative design of the residence fits many uses into a very small footprint. In addition to three apartments, the quarters include a meditation room, and an office space that can also be used to accommodate visitors. Although laid out as a triplex, it is the same size as an average single-family home in the U.S. 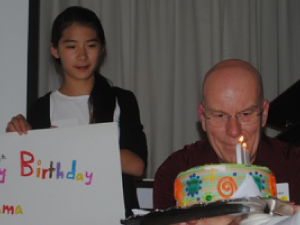 In January, several KCC volunteers put an auspicious finishing touch on each cabin in the cloisters, by mounting one of the eight auspicious symbols, common to Tibetan Buddhism, next to each cabin door.

This project was the idea of Tara Sullivan, one of KCC’s mainstay graphic artists, who designed the plaques several years ago. Master woodworker Steve Parker cut out every tiny detail, and Betta Ledbetter painted each piece. The plaques were installed on each cabin with mindful awareness of the retreatants who will soon practice there, as a blessing for each person’s intention and a concrete connection to the sangha that supports them.

Sullivan is also working on watercolor paintings of the four kings or guardians to be printed and mounted on the north and south cloister gates immediately following the sealing ceremony on April 4. The paintings incorporate rainbow and cloud patterns that Tara found while researching 16th century thangka paintings, as background for representations of the wrathful and semi-wrathful guardians that will protect the cloisters.

Two needs remain, could you help? 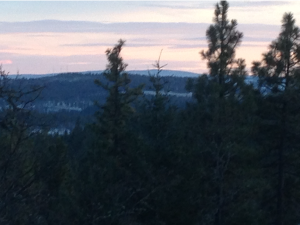 From the center, retreatants will have spacious views of the mountains in the distance.

As the three year retreat begins, the retreatants are gradually withdrawing from their ordinary lives, and KCC is jam-packed with final preparations. As of this writing, we have two needs and would appreciate any assistance other dharma practitioners might be moved to offer, either directly or by helping spread the word:

·         We still seek stipend volunteers who desire to serve the three year retreat at SCOL for a one-year commitment during the duration of the retreat. We particularly need people with skills in cooking, for a group of at least 15 people.

·         It is quite likely that construction of the stipend volunteer residence will not be complete by April 4. KCC seeks use of RVs to house people at SCOL for what could be up to six weeks. We ask anyone who might be willing to loan an RV or rent it at a reduced rate to please contact us.

For both of these needs, please e-mail Linda Besant, chair of KCC’s Rural Oversight Committee, at dancebuzz@soapstone.org.

As Bill Spangle says, “May these retreats benefit not only those who take part but also all those whose lives they touch, whether directly or indirectly.”