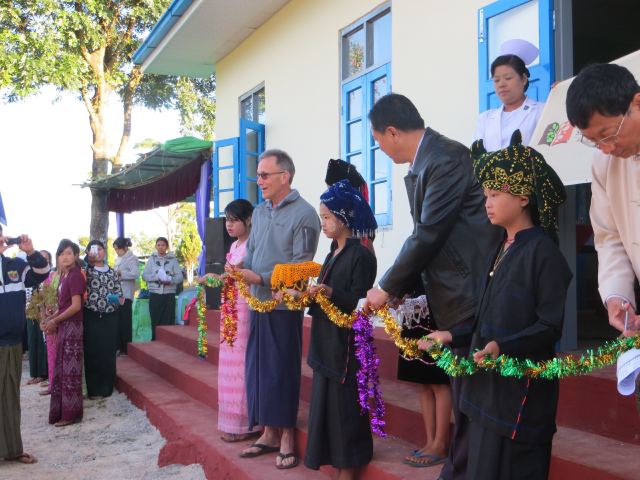 Steve Armstrong and the minister of education and health in Shan State, Myanmar, cutting the ribbon at the grand opening ceremony of Rural Health Center in Bimie, Myanmar. This was funded by Rich and Sharon Stewart of Mt. Vernon, Wash.
Photos by: Myanmar Schools Project supporters.

Over the last decade, Seattle-based Buddhist teacher Steve Armstrong, and many friends and supporters, have built more than 50 schools as well as clinics and nunneries in Myanmar.

In November of 2014, Armstrong and his dhamma friend Roger Brain returned to Myanmar, formerly called Burma. They go each year to inspect the schools that have been built with donations to their non-profit, charitable organizations and to find new projects to build.

Celebrating the 10th year since the founding of the Burma (now Myanmar) Schools Project, Armstrong and Brain visited the dozen schools and clinics built in 2014.  This brings their first decade’s total to 50 schools and 10 nunneries built or renovated, as well as five clinics built.

They then located another 10 villages needing additional educational and medical facilities, to be built in 2015.

Armstrong was so grateful Burmese monks had freely offered him extensive dhamma guidance during his five years as an ordained monk there, that he had always wanted to offer something back out of gratitude. When the means became available, he chose educational and medical facilities.

His present work started in 2005, after Armstrong’s former monastic teacher, Sayadaw U Lakkhana, asked if Armstrong could help him build a school in his native village.

As it happened, just a week earlier, Armstrong’s student and friend Duke McElroy had asked about international aid groups or NGOs, supporting education in third-world countries.

The intent and need seemed like a perfect fit, and the decision was soon made to fund construction of a six-classroom, two-story cement building for 300 students. The building would be built in the remote Burmese village of Kadaw, for $40,000.

McElroy and Armstrong went to Burma in 2006 to see the building and were greeted and hosted by the students and villagers.  From this heart-opening experience, it was obvious more work needed to be done and they started the Burma Schools Project.

The intent, according to the project’s website, was the “compassionate response, by the Vipassana Metta Foundation, to the need for educational facilities and support in Southeast Asia.” 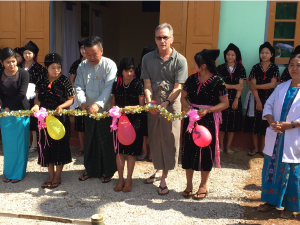 A rural doctor, village girls dressed in ethnic clothing, the Shan State Senator, and Steve Armstrong, cutting the grand opening ribbon at a mid-wives’ clinic in Chaung Ni Poke, Myanmar. This was funded by Claude Ginsburg and Lynne Hyerle of Seattle, Washington.

From that beginning, major funders McElroy and his wife Sharon were joined by two other philanthropic dhamma couples from the Pacific Northwest, Roger and Sharon Brain, and Rich and Sharon Stewart, who continue the practices of generosity, loving kindness, and compassion.

Complementing these major donors, many individual students have offered their support, as do several sitting groups. Now, after 10 years, more than $2 million has been invested in a rapidly changing Myanmar.

In the early years, several times they were the first foreigners to visit a village, and occasionally they arrived in the first vehicle to reach the village. Back then government informants would often question them on the spot, and later would question everyone they had spoken with, including an English-speaking nun who traveled with them to translate.

Now, with a new political climate in Myanmar, that has changed.  Last year, on their 10th annual visit, Armstrong and Brain were accompanied by a state senator, the district health and education officer, and the local education and medical officers, all of them interested in collaborating in selecting the villages and funding the construction of schools and clinics.

After the first couple years of experimentation of building one school here and another there, and trying to find reliable contractors to work with, the group settled on working in three areas in Burma:  Belin, Kalaw and Mandalay. 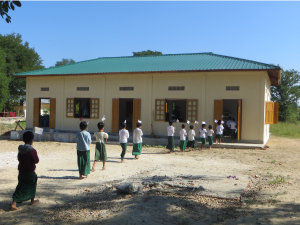 Along the way they established excellent relationships with a monastic elder named Belin Sayadaw, who personally oversees projects in his native village.  They also met a retired teacher, trek leader and builder in Kalaw, and a local businessman near Mandalay.  These men now serve as their trusted general contractors.

Now, over the course of several years, a single village might receive a primary school, a middle school, a pre-K classroom, an assembly hall, a clinic, or a high school, because of the long-established relationships.

All school compounds are also furnished with a reliable water supply and water toilets and uniforms for students and teachers.

Spin-off projects have included building schools operated by nuns for poor students, and building housing for teachers who often come to remote villages from afar.

Every village has its own educational and medical needs, and the group has tried to address these.

Projects have included bringing water lines from distant springs to school and clinic compounds, and installing solar power systems. The latter generate electricity to light classrooms at night so students can study, also to play educational videos, and to operate refrigerators for the clinics, to preserve immunizations shots. 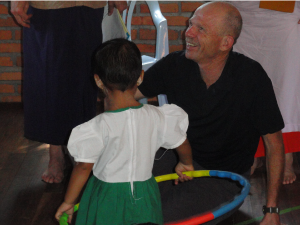 Roger Brain teaching a pre-K student how to use a hula-hoop in Nyaung Palin village in the Belin area of Myanmar. Over the past six to seven years, we have built a large pre-K, K, primary and middle school compound with assembly hall there.

Myanmar is changing fast, and according to its website Myanmar/Burma Schools Project Foundation, the project tries to: “provide educational opportunities for impoverished girls and boys…We believe that every educated child can help him/herself and future children become free of the burden of poverty, and contribute to the well-being of their families and communities.“

This goal is in alignment with the request by Aung San Suu Kyi, the Burmese democracy activist and Nobel laureate, that international aid agencies wishing to help in Myanmar invest in the country’s educational system.

The villagers were grateful during the fall visit for the grand opening of the project’s 50th school, and greeted Armstrong and Brain generously.

In addition to a ceremonial ribbon cutting, the community offered gifts and a feast. The visitors donned the Pa’O ethnic clothing they had been offered, and participated in the communal, tribal dance with the villagers.

The school itself, with five classrooms, was on a high bluff in the village of Nan Yoke, overlooking an expansive, beautiful agrarian valley.

“It is out of gratitude for receiving the teachings of the dharma from Burma that we return to offer these gifts of educational and medical facilities,” Armstrong told the villagers, when it was his turn to speak.

As the Buddha taught, “There are two rare and precious individuals in the world; those who are grateful and those proactive in helping others.”

This on-going opportunity to put the dharma into practice is rewarding and beneficial for all concerned.

0
SHARES
Share
Posted Under: 2015, Compassionate Action, Spring
About the Author: Sharon Brain
About the author: Sharon Brain has been studying Vipassana Meditation for 10 years under the guidance of Steve Armstrong and Kamala Masters. She is a founder of Myanmar Burma Schools Project Foundation in Vancouver, B.C., where she lives with her husband Roger. She has visited Myanmar several times to support the foundation's work.