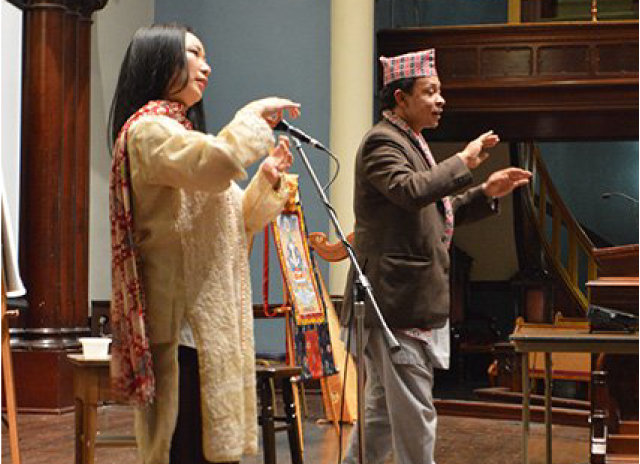 Now starting its 26th year, Northwest Dharma Association is moving into new ways to bring the regional Buddhist community together in closer communication and collaboration. Last year was perhaps our most ambitious year of events so far. Rather than one annual gathering, we held two.

The theme of the 2014 Annual Gathering was “Arts as Buddhist Practice.” Many sanghas and practitioners of dharma art coordinated the two parallel events, in Portland on March 1, and Seattle on March 8. 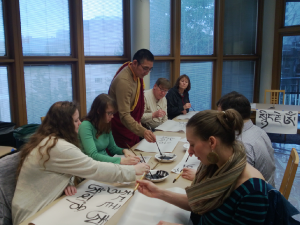 In May, the Buddhist community organized a multi-tradition celebration of Vesak, the traditional South Asian celebration of the Buddha’s enlightenment, through Northwest Dharma Association. Monastics, clergy, and dharma practitioners from throughout the Puget Sound region attended the event, at Nalanda West in Seattle.

We also hosted two teachers meetings on Oct. 4, one in Portland and the other in Seattle. This annual event brings teachers together in an assembly of peers to exchange challenges, experiences, and inspiration from their lives as teachers.

These events require concerted effort on the part of the dedicated volunteers who coordinate them. The board and staff of NWDA deeply appreciate their generosity.

In the fall, the board proposed a new structure for future events: the Mahasangha Initiative. The concept is based on the concepts of streamlining and decentralizing, as well as fostering wider engagement.

These events have evolved, rising and falling as conditions warranted. Mahasangha events are those that bring different traditions together to explore themes related to our practice together. The term mahasangha refers to the idea of the larger sangha made up of all of us who follow the Buddha dharma, no matter what form that may take.

In that meeting the board voted for the initiative to be developed, coordinated, and maintained by the vice president, currently Damien Abel. 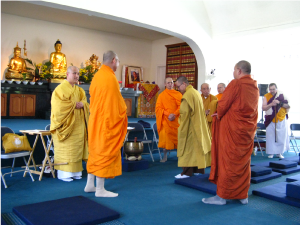 Monks gather at the 2014 Vesak in Seattle.

Since the board created the Mahasangha Initiative, several gatherings have been held in Seattle. These are simple, informal meetings, for socializing, learning about one another’s traditions and practices, and sharing ideas about dharma practice in contemporary life.

The board hopes to seed the initiative throughout the region by finding local coordinators to help organize these events. These can range in size and complexity from a few people meeting in someone’s home, to full-scale regional events, such as last year’s annual gatherings.

Northwest Dharma Association will provide the administrative and organizational infrastructure. There is a Meetup site for organizing these events.

The Northwest Dharma Association was born as a recognized charity in 1989, with 2014 our 25th anniversary. Over the years, many people have devoted themselves to NWDA’s mission to support Buddhist teachings, practice, and community in the Pacific Northwest.

During all this time, NWDA has published the Northwest Dharma News. Keeping up with changing times, the news is now online. It is by far the most comprehensive regional news magazine in North America devoted to dharma activities. 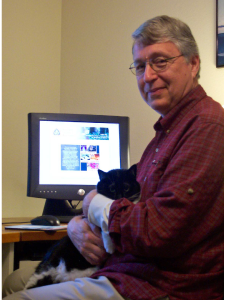 David and his cat Samantha, working on the Northwest Dharma Association website.

By great good fortune Steve Wilhelm is at the helm of the news, gathering wonderful stories from throughout the region. The Northwest Dharma Association is indebted to his tireless work as editor, bringing each quarterly edition of the Northwest Dharma News to fruition. We also have a significant presence on Facebook .

The NWDA website lists all 108 member groups throughout the region, with information about their regular activities. The site also lists special events in the regional calendar of events. More than 5,000 people visit the site each month.

Speaking of staff, we need to recognize several people’s invaluable contributions of years of service.

David Forsythe is stepping down from literally decades of selfless, volunteer dedication to both the Northwest Dharma Association and the Buddha dharma. We are incalculably in debt to his great generosity, and so appreciate his behind-the-scenes work, which has held our association together. It’s impossible to adequately thank him.

I hope this appreciation can make a small dent! David, thank you, and we wish you entirely the best moving forward.

Timothy O’Brien is our heart and soul. He is so well connected and so respected in the Buddhist community of the Pacific Northwest, it’s hard to imagine where we would be without his involvement in various staff roles over the years. 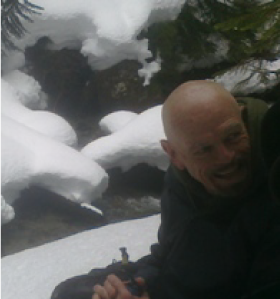 Functioning essentially as our executive director, he has been the glue that has held us together. Timothy remains a vibrant, integral force within our association and we so appreciate his stewardship and continued involvement. Thank you Timothy!

As always, there is the ongoing board work of setting policy, procedures, and direction as well as overseeing the operational side of NWDA; i.e., funding and finances, the legal and tax requirements, and the overall administration. Because there is a very part-time, modestly rewarded staff, most of the work is done by volunteers. Please consider being one. It is a great way to meet your fellow Dharma practitioners.

The board continues to build to the goal of achieving financial stability for the next generation of NWDA leadership by increasing participation in the Mahasangha Mala, the community of sponsors who make a monthly pledge of $9 or more to support the work.

As of December 31, there were 36 Mahasangha Mala members, one-third of the initial goal of 108. Meeting that goal will provide a base of revenue that, along with the member group dues, will guarantee coverage of the standard operating budget so other gifts can be used to expand programs.

Thank you to all of our donors: mahasangha mala members, donors who give through their workplace giving programs, our major donors, and everyone who contributed to NWDA’s success in 2014.

And, finally, a deep bow of appreciation to Ven. Thubten Chönyi from Sravasti Abbey, who retired from the board after many years of service to the dharma at NWDA. She has been a wonderful and inspirational colleague over the years.

0
SHARES
Share
Posted Under: 2015, NWDA News, Spring
About the Author: Tim Tapping
Tim Tapping practices with Sakya Monastery of Tibetan Buddhism in Seattle, and is president of Northwest Dharma Association. He works as a software engineer at Expedia travel in Bellevue, Washington, and leads a meditation group there. He lives in Sammamish, Washington, with his wife and daughter. His son is a chef in Long Beach, Washington.