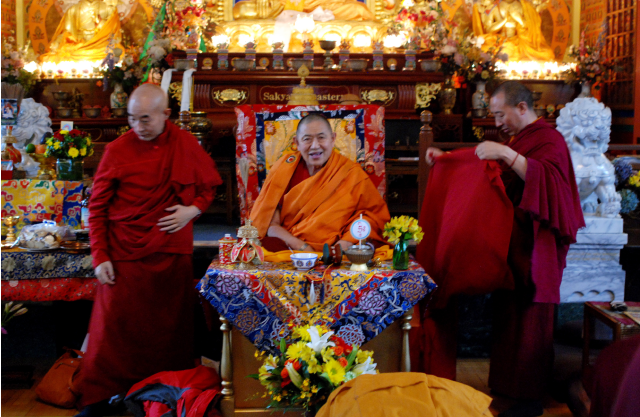 H.E. Garchen Rinpoche and his two attendants, Lama Bunima and Lama Abao, at the Sakya Monastery in 2013. This was the first event organized by Drikung Seattle and the year of its founding.
Photos by: Katia Roberts, Yanfen Wang

Last September the center, which practices in the Drikung Kagyu school of Tibetan Buddhism, moved from a private residence to the West Seattle Senior Center. There the group is meeting weekly on Saturdays, from 10 a.m. to noon, for meditation and group practice. 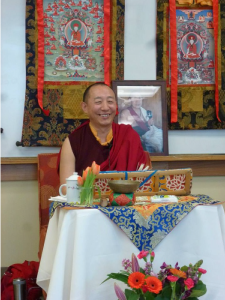 Drikung Seattle plans to offer a series of teachings during our regularly scheduled Saturday meetings later this spring, via Skype, by Khenpo Samdup. He is resident lama of our sister group Gar Drolma Buddhist Center, in Dayton, Ohio.

Almost immediately after opening our doors, we began welcoming many new students. We are thrilled to see a thriving and enthusiastic group of practitioners begin to take root.

Guided by His Eminence Garchen Rinpoche, a senior Drikung Kagyu teacher, the group just finished a series of teachings and is now preparing for a July visit by Rinpoche himself.

Drikung Seattle greeted the new year with a flurry of dharma activities over three weekends, with teachings by two teachers.

Especially significant to us were the teachings by Lama Abao, who is to become our resident lama in Seattle. He is one of two attendants to H.E. Garchen Rinpoche. 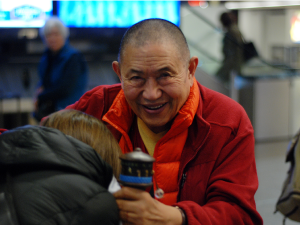 H.E. Garchen Rinpoche greeting students on his arrival at Sea-Tac airport in 2013.

Lama Abao received monastic vows at 15 with the Mahasiddha Karma Norbu, and met Khenpo Munsel at age 18.  He has served as an attendant to Garchen Rinpoche, and traveled with him since 1997.

It goes without saying that we are all deeply grateful that Lama Abao will be our resident lama. In addition to teachings, Lama Abao offered us precious words of guidance and encouragement for the future of Drikung Seattle.

July will be the biggest month on Drikung Seattle’s calendar, with the turning of the wheel over eight days by H.E. Garchen Rinpoche. 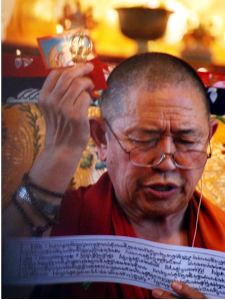 Garchen Rinpoche at the Sakya Monastery in 2013.

H.E. Garchen Rinpoche is the subject of the documentary film “For the Benefit of All Beings” by Christina Lundberg.

The July teachings will be a powerhouse series not to be missed.  Rinpoche will begin the weekend with a public talk, “Living a Meaningful Life,” at Seattle’s Town Hall on Friday, July 3, at 7pm.

The first four days of the program, July 4 – 7, will be a Chakrasamvara teaching and empowerment bestowed by H. E. Garchen Rinpoche. Rinpoche also will offer the Five-Fold path of Mahamudra teachings.

Chakrasamvara is the main meditational deity of the Kagyu lineage, and the specific deity focused on in the Five-Fold Path of Mahamudra practice, which Rinpoche will teach in detail. 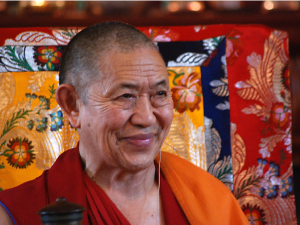 Garchen Rinpoche smiling at students and turning his prayer wheel, which he spins continuously.

The second weekend, July 10 – 12, will include Red Chenrezig empowerment, teachings and practice, tsok offering, and a refuge ceremony, as well as a special fundraising dinner.

Red Chenrezig is a rare and precious highest yoga tantra aspect of Chenrezig, the meditational deity of compassion, also referred to as Avalokiteshvara, in Sanskrit. Red Chenrezig has been practiced uninterruptedly at Gar Monastery in Tibet, and now Garchen Rinpoche and Lama Abao have asked Drikung Seattle to annually host Red Chenrezig drubchens (a traditional style of Tibetan retreat). This practice is not currently being performed in the West in the Drikung Kagyu tradition, and we are so honored to have these opportunities.

To enable an even-wider audience to benefit from HE Garchen Rinpoche’s teachings, Chinese and Vietnamese translations will be offered by FM transmitter for the July 4-12 teaching program. 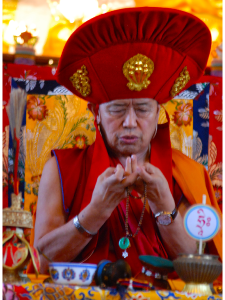 Full details of the program and registration info, via Eventbrite, can be found on our website.  For out-of-town visitors, we also have accommodation and transportation info on our website.

No one is turned away for lack of funds at Drikung Seattle. However, as a young organization with limited resources, we are extending an “open generosity” policy and, if possible, would appreciate everyone’s support toward this event.

We hope to see many familiar and new faces at the July program as well as at our weekly practices. Please do share this news to your family and friends. If you have specific questions, please email us at drikungseattle@gmail.com.

0
SHARES
Share
Posted Under: 2015, Sangha News, Spring
About the Author: Linda Lee
Linda Lee is a board member of Drikung Seattle and a student of Bardor Tulku Rinpoche and H.E. Garchen Rinpoche.