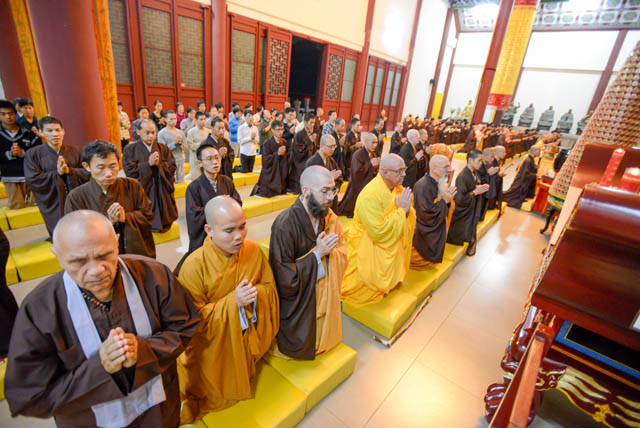 October was an auspicious month for friends and members of Mount Adams Zen Temple, of Trout Lake, Washington, as they completed a long-planned Zen pilgrimage to China.

Mount Adams Zen Temple teacher and abbot, Ven. Kozen Sampson (Thay Minh Tinh), had spent months diligently planning a trip to China that would include nine members of his extended dharma family. The trip came on the heels of converging events which included the publishing of the book “Seclusion and Awakening,” the story of modern Chinese Zen Master Venerable Wan Xing Shi. 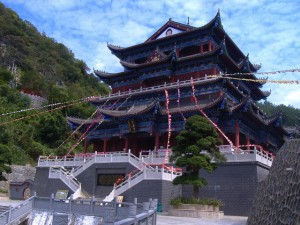 Master Wan Xing Shi, abbot of Dong Hua Temple in China, had written his account based on his years in solitude in Three Sages Cave, and his collective insights derived from his experiences.

His book was translated to English by his Chinese-American student Susan Bankson, who asked Sampson to help her with the final editing and publication. Venerable Kozen  and Fa Hsing (Shakya) Jeff Miles, resident teacher at Mountain Way Zendo of Grays Harbor, Washington, spent several months on the project and published the final manuscript earlier this year.

The relationship that developed between these collaborators led to the formulation of a trip that would include Bankson as translator and guide.

It was at last summer’s retreat and ordination at the Desert Zen Center in Lucerne Valley, California, that the idea of the trip really took hold, and a group developed from those in attendance. 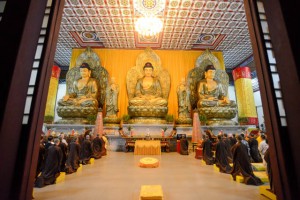 In addition to the obvious connection to Master Wan Xing, Venerable Sampson had also developed a deep personal relationship with Ven Master Ming Chan Shi of Jia Shan temple, who had come to America a couple years earlier becoming an honored guest at Mt. Adams. It was Master Ming Chan who sponsored the individuals, and officially invited our group to China.

The first half of our trip consisted of an extended period of Zen monastic living at Dong Hua temple, a massive modern complex built on former site of the original ancient temple of the same name. Our day began with morning services and Qi Gong at 4:30 am, and concluded with meditation and Qi Gong ending at 9:30 pm. There was free time during the day, but otherwise we followed the regular monastic schedule. 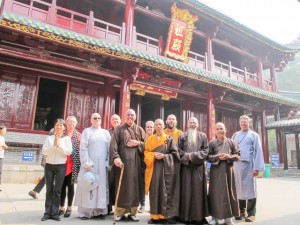 After our stay at Dong Hua Temple, we traveled several hours north to the Yunmen Temple, long-time home temple of Chinese Grand Master Hsu Yun, and his student Master Foyuan, who was abbot for 50 years beginning in 1959.

We were greeted by the current abbot Master Ming Xiang, who has been abbot since Foyuan’s passing in 2009. Master Ming Xiang treated us to tea and some beautiful works of calligraphy, for which he is renowned. After tea we were given a tour of the temple, which included visiting the new pagoda and two-story museum dedicated to master Foyuan.

After spending the night at Yunmen temple, our caravan moved on to Nanhua temple in Shaoguan City. Nanhua temple is the celebrated home of the Sixth Zen Patriarch Hui Neng, where we visited Hui Neng’s memorial pagoda, and the hall where his lacquered mummified remains still reside. 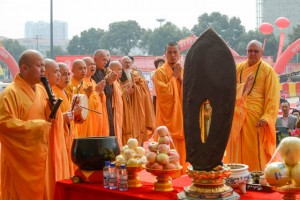 We were given a complete tour of the temple by the head monk, which included being allowed into the sacred hall where Hui Neng’s likeness is preserved, seated in a sealed glass cabinet. We paid tribute to the Sixth Patriarch and offered incense, before being treated to lunch and given beautiful historical reproduction copies of the “Platform Sutra,” the compiled teachings of Master Hui Neng.

From Shaoguan City, we had the pleasure of taking the bullet train to Changsha City, reaching a top speed of 303 kilometers per hour! (190MPH!!). Our trip was less than two hours long and far more comfortable than riding on a jetliner.

We stayed for two days in Changsha City, where we were the honored guest of Master Ming Chan (our sponsor and abbot of Jiashan Temple), who was there to co-host the 2014 Hunan Provence Tea Expo, and to perform opening services and blessing for that event. Those among us in the group who were ordained, also participated in these ceremonies.

It was quite an experience to perform a Buddhist blessing ceremony before a crowd of hundreds, without knowing the language or exact protocols of the ceremony, but we managed quite well all the same. 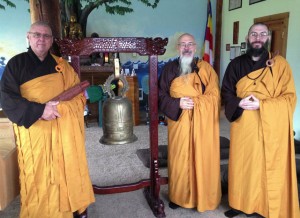 After the Tea Expo, where we watched and participated in multiple tea ceremonies, we headed out to Jiashan Zen Temple, Shimen County, home of the famous Koan collection known as the “Blue Cliff Record.”

Again we were expected to participate in the grand ceremonies, but by now we had experience and were familiar with what was expected of us. We enjoyed multiple tea ceremonies and presentations on Zen and tea, as well as the history of tea in China.

Needless to say that Abbot Master Ming Chan is also a master of the tea ceremony and his temple is deeply steeped in the tea tradition (pun fully intended). 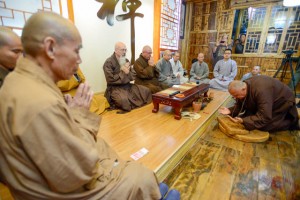 It was in a ceremony at Jiashan temple, that Venerable Sampson student Ron Zimmerman became ordained in the Chinese Zen Tradition. Those of us who were there couldn’t help but feel a little jealous that Ron received his ordination in China, at the home of the “Blue Cliff Record,” but those of us who were into the tea ceremony were doubly jealous because of this deep association between Jiashan temple and the tea ceremony.

Our last morning at Jiashan Temple, was spent at Blue Cliff springs and the famed Blue Cliff, where the “Blue Cliff Record” was purportedly composed.

We gave offerings to the altar in the small cave, stared down into the clear blue pool of the springs, and ascended the steep stone staircases. It was a dreamy landscape that dripped with history and legend, with a long covered walkway leading back to the village and Jiashan Temple. We had found our way deep into China and deep into the history of Zen, but it was time to start heading home. 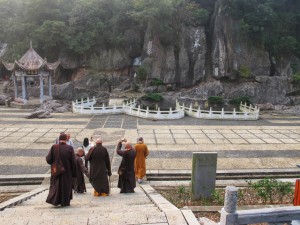 Descending to the Blue Cliff Springs.

After a brief tour and afternoon stay at Qiang Ming Temple in Changde City, our wonderful pilgrimage ended with an overnight train ride back to Guangzhaou. This time we rode a traditional train, in sleeper cars where the “clack-clack” of the wheels on the rails accompanied our sleep over the 520-mile journey.

We visited one more historic temple in Guangzhou, known simply as Guangxiao Temple (same as Guangzhou), which was the temple where Master Hui Neng finally received ordination, long after being recognized as the Sixth Patriarch of the Zen tradition.

It was at Guangxiao Temple that the famous “Gateless Gate” koan, “Not The Wind, Not The Flag,” originally took place.

We spent our last day in China as tourists, roaming the crowded streets of Guangzhou, eating local delicacies and stocking up on souvenirs.

The next morning, with extra suitcases filled with books and trinkets, we headed off to the Guangzhou airport where some returned home directly, while others headed off to other adventures in Korea, India and Thailand. It was the trip of a lifetime for all of us, and even though some were seasoned world travelers, we all felt that this Zen pilgrimage to China was magical and absolutely extraordinary.