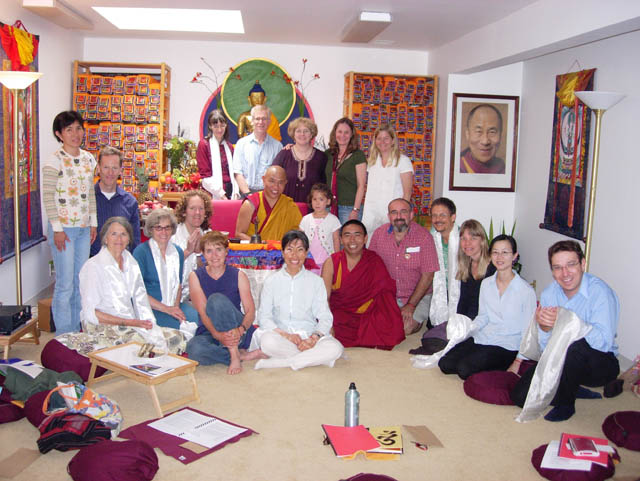 Dharma Friendship Foundation, a Seattle Buddhist organization in the Tibetan tradition, is searching for a new home.

Widely known as DFF, the center is seeking a space of at least 600 square feet. The space (and rental expense) could be shared with other dharma groups or healing practitioners. DFF typically meets once a month on a Saturday or Sunday, and offers weeknight classes periodically throughout the year. 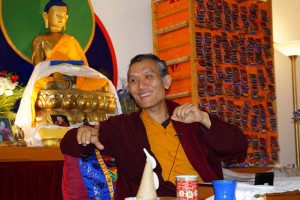 The center has supported a center in Seattle’s International District for the past three years, and wants to continue its mission of sponsoring qualified Buddhist teachers, and hosting Buddhist meditation classes and seminars. Dharma Friendship Foundation is a 501(c)3 non-profit organization, run by an all-volunteer board of directors.

We have a Buddha statue that’s three feet tall, a few other gold-leafed statues on a wooden altar, and a complete collection of the Kangyur and Tengyur, which are Tibetan manuscripts containing all the teachings of the Buddha, and the major commentaries. These sacred, blessed objects have a powerful ripening and deepening influence on meditation, enabling people, whether new to meditation or with years of experience, to gain fresh insight on the keys to the path of awakening. 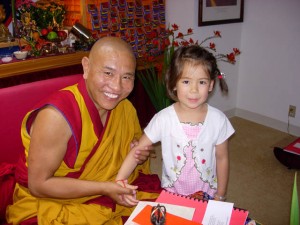 Jhado Rinpoche with a young student, 2008.

The center has since 2005 been directed by Yangsi Rinpoche, president of Maitripa College in Portland, Oregon. Yangsi Rinpoche is a fully trained Lharampa Geshe, a degree equivalent to a doctorate in Buddhist philosophy, which he earned after 25 years of rigorous study.

Rinpoche visits DFF in the fall and spring. During Rinpoche’s visits DFF hosts vegetarian potluck lunches, enabling students old and new to meet him and experience his relaxed and compassionate presence. 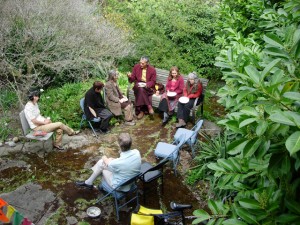 Yangsi Rinpoche and community members gather for a 2011 potluck at our most recent center on East Union Street in Seattle.

Over the past three decades, teachers and students at DFF have made significant contributions to the transmission of Buddhism to the West. The organization has sponsored major conferences and translation projects, and has inspired many students to complete long-term retreat, and several to take monastic ordination.

Before Yangsi Rinpoche, the organization was led by Venerable Thubten Chodron from 1992 until 2002. She left to found Sravasti Abbey, a monastic community in Newport, Wash.

DFF was founded in 1985 by students of Gen Lamrimpa, a Tibetan yogi known for his deep understanding of Buddhist meditation, as well as for his gentle nature.

If you know of a space which might be a suitable match, you can contact DFF by phone at 206.860.5009, or via email: info@dharmafriendship.org.

0
SHARES
Share
Posted Under: 2014, Sangha News, Winter
About the Author: Jordan Van Voast
Jordan Van Voast has been a student at DFF since 1993 and is the current board president. He lives with his parents, wife, and daughter and practices community acupuncture in southeast Seattle. He teaches meditation at the Community Center for Alternative Programs, a division of the King County Jail.