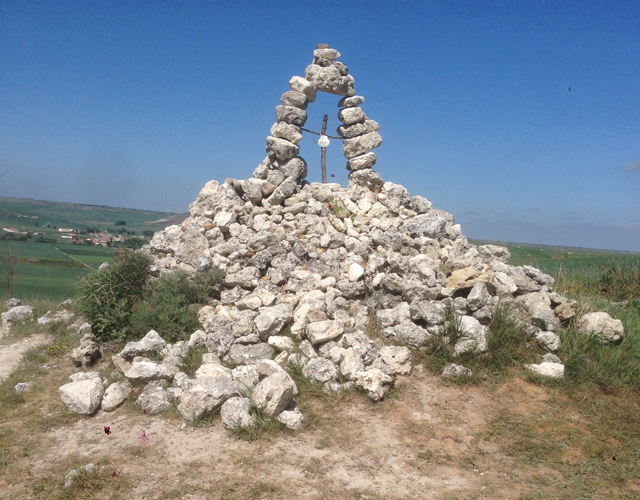 So many pilgrims have walked the Camino de Santiago that they’ve left this rock cairn.
Photos by: Tom Kaczmarski

One might wonder what would drive a Zen student to walk the Camino de Santiago, the Catholic pilgrimage in Spain. I wondered the same thing.

What I learned is that the pilgrimage became a long kinhin, which is the Japanese term for walking meditation done between rounds of zazen, or sitting meditation. The miles on the path also became an awakening of gratitude. 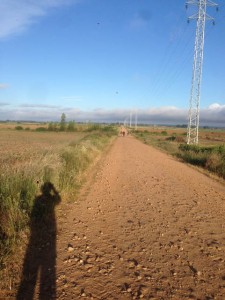 A lot of walking ahead.

I have for five years been living at the Zen Centre of Vancouver, British Columbia, studying Zen under my teacher, Eshin Godfrey.

One initial reason I went is because of the history of the Camino de Santiago. The Camino is a nearly 1,000-year-old European Christian pilgrimage to the city Santiago de Compostela, and to the relics of Saint James in the cathedral there.

I also walked the additional trail to the lighthouse at Finisterra, another 56 miles. I wondered what had brought people to this pilgrimage for nearly 1,000 years, and buried deep in that question was the reexamination of my own Catholic roots. I am Polish-Canadian and Catholicism is deeply woven into my mother culture. I needed, at some level, to revisit what I had left behind. 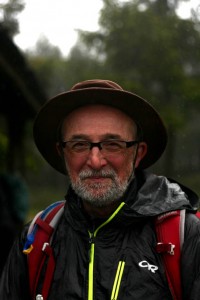 The true reason, though, was that something deep inside me told me to go. The other reasons seemed only justifications, like arguments after the fact.

There is no shortage of information on the Camino, both in print and on the internet. I recommend purchasing an updated copy of “A Pilgrim’s Guide to the Camino De Santiago,” by John Brierley. If I could give one piece of technical advice though, it would be to pack wisely and pack lightly. Those who left more behind fared better.

It was in the bus terminal in Pamplona, on the way to St Jean to start my walk, that I met a Hungarian gentleman who had just finished the pilgrimage and was on his way back to pick up his car. He was very obviously moved by the experience, and what he spoke of most was gratitude. Our conversations, first in the terminal, and then on the bus, about gratitude, echoed in me for the rest of my trip. 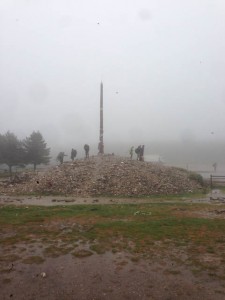 Another cairn, in the early morning fog.

I was grateful for my Zen training and for my teacher. There were striking similarities between my experience of the Camino and our traditional silent retreats called sesshin.

Sesshin is characterized by early mornings, long hours of meditation, sleeping in dormitory style arrangements, communal structured meals, and sharing of limited space and resources. Several times a day each participant has a one-on-one interview with the sesshin leader. Sesshin forces you to look at yourself and your relationships, and through that, the nature of reality.

On the Camino we slept in what are called albergues, or pilgrims’ hostels. Depending on the Albergue, there were anywhere from six to 100 people in a room, sleeping in bunks. The cost of these beds was anything from a donation to 12 Euros a night. Showers, kitchen facilities, and space in general, were all shared and of limited supply. 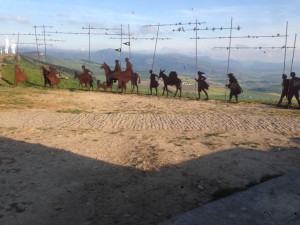 Statues along the way represent the journey.

We generally woke around 5 a.m. and were out the door before dawn to start our walk. My shortest day was 12 miles and my longest day was 25. I was generally done walking by 1 p.m., although there were days I walked till 4 p.m.

Once we stopped, we would find our beds for the night, wash our clothes and settle in. We either shared meals in communal kitchens, or ate at the local restaurants. Restaurants along the way always had pilgrims’ specials. These were reasonably priced for the most part, and the quality of the food ranged from good simple fare, to mediocre simple fare, but in general the food was very “meat and potatoes.” 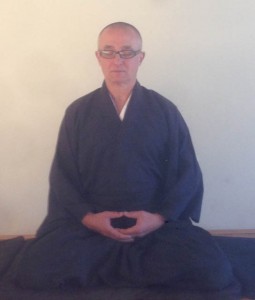 Author in meditation, back in Vancouver.

Spain is a tough pace to be vegetarian, let alone vegan. Anyone with these food requirements should be prepared to cook for themselves often.

The afternoons were spent exploring the town we were in, and often going to mass. We were generally in bed by nine in the evening and most albergues had a policy of lights out by 10.

There were no formal interviews with a teacher, but those of us who approached the Camino as a pilgrimage, or were at least open to the experience, quickly found each other. We would meet on the trail, doing laundry, eating, or mending our blisters. We would share our experiences and our revelations; our pains and our delights; often our silence, and we became each other’s teachers.

Although the Christians I met had a deeper affinity for the Catholic mythology of the walk and with the images presented in the artwork and architecture, I felt my Buddhist training gave me a deeper appreciation for the process. 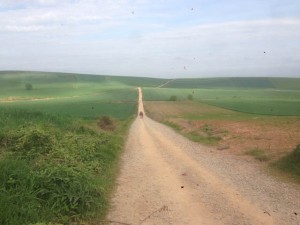 The long path into the distance.

The lore of sesshin, and the Camino, speak of a three-stage process. The first is adversity, coming from within, without, or both. There is plenty of adversity on the Camino. I walked in May and the mountains were steep, wet and cold. The plains were dry and hot. Some of the Albergues were beautiful, some less so. Some nights were the wonderful timeless sleep of satisfied exhaustion. Some were preceded by cold showers, as an introduction to a night of choral snoring. Some walks were peaceful. Some were a battle with countless bits of angst from within.

All this adversity slowly distils down to the insight, acceptance and peace of the second stage.

Stage three involves consolidating these insights into yourself and into your life. Needless to say, despite the differing time frames the process felt familiar, as did the pain in my legs. 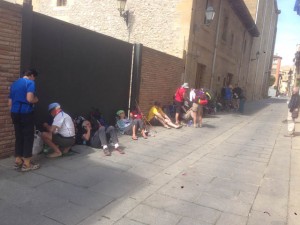 Tired pilgrims wait for an albergue to open.

As discomfort gave way to insight, my gratitude extended past my teacher and lineage, to those who supported us on our pilgrimages.

The Albergues were generally staffed with volunteers, most of whom had been pilgrims in the past. Restaurants and stores along the way adjusted their hours to suit us, yes for profit, but also, very often, out of respect for us and our process. Random people, even in large cities, recognized us and offered help when they saw we needed it.

I would describe this spiritual ribbon of good will in terms of karma, and my Christian friends in terms of God’s blessing. I even became grateful for the pain in my feet, as it meant I was alive, human, and healthy enough to experience. 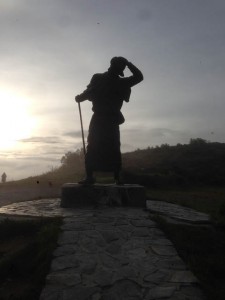 A statue urges on the tired.

Gratitude became acceptance and deep identification. Not all of the Camino is picturesque. As I walked through the industrial parks, I came to realize that I had put the factory there; me with my aluminum walking poles, Gortex jacket, and nylon back pack. My Christian friends spoke of finding God in the factory.

We began to accept the bits of commercialization along the way. We smiled at the billboards on the path for restaurants and albergues, or luxurious B&Bs, services that would carry your pack to the next town, or buses to take you past the ugly bits.

We came to accept those who found ways to skirt the challenge of the Camino, and by doing so skirt their own challenges. They found what they could, to the best of their ability. “Judge not lest thou be judged,” became a theme. 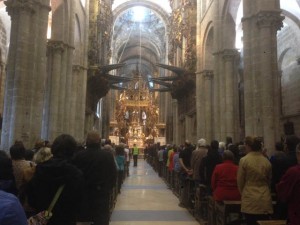 Mass for pilgrims at the Santiago de Compostela.

As judgment melted we began to find understanding behind our words, and our silences. I feel it was in our silences that we most often found a true common ground that we all understood, but were challenged to describe.

It was in those moments, that I more deeply examined my attachments to Buddhism, and to my Zen practice. My Christian friends looked at their relationship with God and idolatry. Was God a doctrine, a Bible, a church, or was it just God?

It became apparent to us that we had found each other in a common space of meaning. What were our creeds other than personal and cultural expressions of something more profound?

My teacher often talks of the form of our practice as a crucible, a simplified environment where we can practice, learn and transform. We then take that learning out into the world, and in doing so transform it. The lore of the Camino is much the same. People talk of the Camino never ending; a walk you do for the rest of your life. We found, as we walked, that our needs became less, our gratitude greater, our acceptance deeper, and in this we found our humility. In this we found our commonality. It seemed to me that we had found the key to the ancient angels’ blessing at the birth of Christ, “Peace on earth good will towards men.”

0
SHARES
Share
Posted Under: 2014, Dharma In Canada, Winter
About the Author: Tom Kaczmarski
Tom Kaczmarski is a lay student of Rinzai Zen as brought to North America by the late Joshu Sazaki Roshi. He has been living at the Zen Centre of Vancouver for five years, studying Zen under his teacher, Eshin Godfrey.