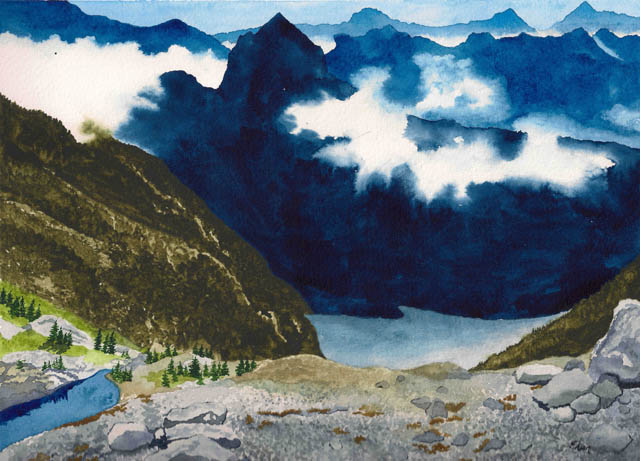 Blue mountains from the citadel.
Photos by: Amy Darling

Nearly 100 visited the two-hour opening, on a chilly and wet Sunday afternoon. The pavement of this historic street was rain-slicked and matted with decomposing oak leaves. As the afternoon light faded, a familiar autumn darkness settled in.

The Seattle opening of Amy Darling’s art at Miro Tea attracted nearly 100 people, despite the cold and wet.

Inside the show became an island of warmth and welcome for guests and tea patrons alike. An effortless flow of human interaction defined the opening; marked by palpable gratitude between the artist and those attending.

Darling has been a Zen practitioner since 1996. Her art – expressive and spontaneous – provides a window into Dogen’s world. Her words best explain her purpose:

“The images here are a gesture of ‘seeing.’ Zen practice is not something distant or esoteric, but simply and fully being ALIVE; hiking being the path, painting the mountains being a mountain. In the most graced moments in the painting studio, I get out of the way and allow the mountains and rivers to paint themselves.”

The art that resulted beckons, and invites ease. For more information on the artist and her art visit her website. Darling signs her art with her dharma name EKan.

Though she’s new to watercolor in the past two years, Darling views painting as an extension of the tactile skills she has honed over many years practicing acupuncture. 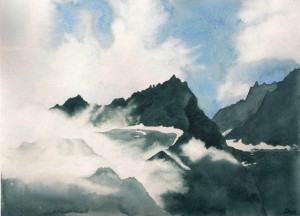 Peaks in their surround, with planes of light and dark patterned against one another.

A quote from the sutra on the show’s invitation hooked my attention:

“Mountains have been the abode of great sages from the limitless past to limitless present. Wise people and sages all have mountains as their inner chamber, as their body and mind… but after entering the mountains, not a single person meets another. There is just the vital activity of mountains.”

Eihei Dogen Zenji was a Japanese Zen monk who lived from 1200 to 1253. He became a student of his first teacher, Master Rujing, during a three-year sojourn to China. Upon his return, Dogen established in Japan what became the Soto Zen School of Zen Buddhism.

Dogen was a prolific writer, producing an immense canon, capped by his masterwork the “Shobogenzo.” Western followers of Dogen delight in his “Mountains and Waters Sutra,” which sets forth his vision of nature, mind and Buddhahood.

Dogen scholars have in the past decade redoubled their efforts to decipher Dogen’s greater meaning and importance. Translations true to his words have been perfected through long and arduous travail, done with great care. Attention to such detail has formed a foundation of understanding.

Still, Dogen can seem ponderous and impenetrable –practitioners steeling themselves against feeling lost and confounded. 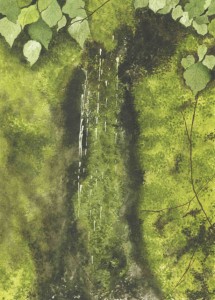 A calming still life from nature, with finely rendered leaves and a massing of amorphous, water-saturated moss.

The show: the art and Dogen, and artist

Over time, Darling read the sutra over and over non-conceptually, not with analytical mind. Her watercolors are not only interpretation, but also art in their own right – grounded and transcendent – communicating Mahayana Buddhism’s central notion of form and emptiness.

The artist’s deft eye and hand transforms these mountains and waters into a clear dharmic vision, places that exist in space, and everywhere and nowhere at the same time.

Though the images are taken from nature, Darling gives no explicit hint of place or time. In putting together the show she chose not to constrain each piece with name or label, so these mountains and waters might reside in both reality and in the imagination.

In the artist’s words, “The displayed works here are my humble effort to actualize Dōgen’s ‘Mountains and Waters.’ Ultimately, his lyrical expression extends far beyond literal ‘mountains or rivers’ to encompass the vast terrain of the mind; that which walks endlessly, that which flows and that which does not move.” 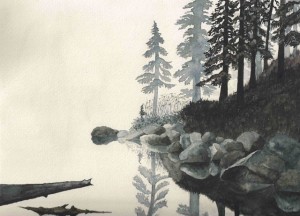 In her art, and in Dōgen’s, mountains are environments ever in transition – always emergent, yet always senescent; coming forward and falling away. No land form is more solid, yet few settings more bespeak impermanence: rain, wind, clouds, parching heat, forbidding cold – one moment bursting with lupine and Indian paintbrush, another moment barren, with no sign of life.

The show affirms that Dogen’s mountains and waters are an abode – constant and consistent in form and emptiness. Darling quotes Dogen:

“Since mountains belong to the sages and wise people living there, trees and rocks become abundant and birds and animals are inspired.” And again, “Even in a drop of water innumerable Buddha lands appear.”

We must find our own meaning. Unfettered, we can place each image into our personal universe so that these become our mountains, and our waters. She provides abundant opportunity to enter, notice, and, if only briefly, live in Dogen’s world. 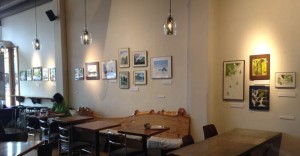 Amy Darling’s watercolors on the wall of Miro Tea.

Darling told me following the show, “I am filled with joy. A woman approached me at the opening and shared, ‘I could just sink into these images all day long.’ She told me that she felt invited into the intimacy of her own experience of mountains.

“The day before the show I had a moment of indecision. Someone suggested I should label the watercolors to identify the subjects and their location. I didn’t do that because I knew that if I did people would stop seeing. As I walked around I could hear people saying, ‘I wonder where that is. That reminds me of such and such a place.’ It was so much more spacious not to restrict imagination with a label. I wanted to create as few barriers as possible.” 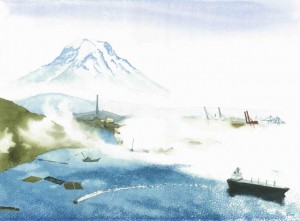 A dreamlike representation of Mt. Rainier, across fog-shrouded Commencement Bay at Tacoma, Washington.

There is a phrase in the Soto Zen chant recited before every morning and midday meal. It goes: “May we, with all beings, realize the emptiness of the three wheels: giver, receiver, and gift.” As I reflect on the opening, I marvel that those present both gave and received; exchanging myriad gifts.

Towards the end of the “Mountains and Waters Sutra” Dogen concludes:

The story here is that the artist expounded on the dharma. With her art, she not only actualized Dogen’s mountains, but also herself as one of them. Having witnessed the impact of her show, and traversed her art, I wonder what might be next for the artist, and what new vision to expect.

0
SHARES
Share
Posted Under: 2014, Dharma Healing, Arts, Winter
About the Author: Jay Laughlin
Jay Laughlin has been a Soto Zen practitioner in the lineage of Shunryu Suzuki Roshi for 15 years. While an undergraduate, he worked in the Yale University Art Gallery, and assisted in staging two major exhibits of American art. He retired from public service in 2010, and now offers psychotherapy to low-income clients.