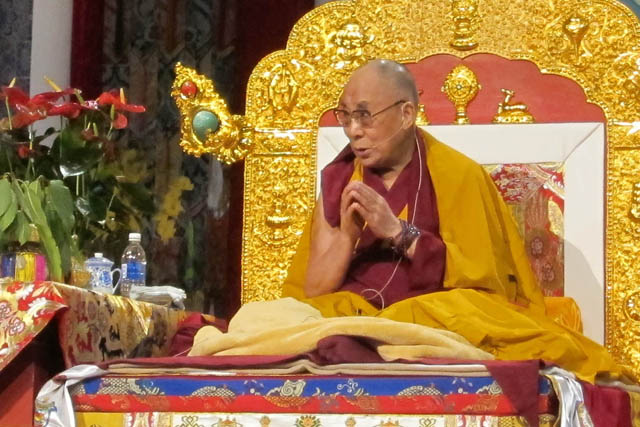 The focus of His Holiness’ teachings was “Eight Verses of Mind Training The Mind,” by Geshe Langri Thangpa.
Photos by: Peter Weertman

On October 23, about 5,900 people gathered at Thunderbird Arena at the University of British Columbia in Vancouver, to see His Holiness the Dalai Lama and to receive seven hours of Buddhist teachings, including the Avalokiteshvara empowerment.

This was the fourth time in 10 years that His Holiness the Dalai Lama has visited Vancouver. In addition to the all-day event at UBC, he also participated in a Heart-Mind Summit and panel discussion called “Be the Village,” hosted by Vancouver’s Dalai Lama Center for Peace and Education. 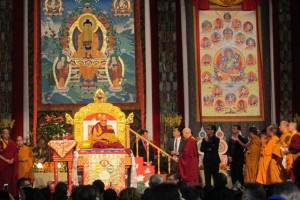 The day-long Oct. 23 event was co-organized by the Tibetan Cultural Society of B.C. and Tsengdok Monastery Association, a small local monastery located in Vancouver and run by Tsengdok Rinpoche.

As a special element for the day, Tsengdok Monastery created a unique seating arrangement on the arena floor level. Ticket buyers who took part in the Heart Project were given red and white t-shirts to create a giant heart to convey the message “With all our hearts united as one, let us pray for world peace.”

Among the crowd for the teachings on October 23 were hundreds of Tibetans from across the western United States and Canada. There was a festival-like atmosphere as the crowds streamed into the arena. Waiting outside in the rain and wandering through the bustling indoor Tibetan marketplace, they warmly greeted old friends in the Tibetan diaspora.

The day began with ritual preparations for the empowerment, and prayers by nuns and monks of other Buddhist traditions. Simultaneous translation for the day’s events was provided in Vietnamese and Mandarin. 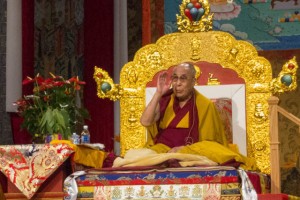 The Dalai Lama emphasized study as a key part of Buddhist practice.

According to the schedule, half of the day was to be devoted to a teaching on the “Eight Verses of Mind Training The Mind,” by Geshe Langri Thangpa. However, after some short introductory remarks, His Holiness spoke for about two hours on the roots of Tibetan Buddhism and the Sanskrit tradition.

He said that he often describes the Tibetan tradition as the Nalanda tradition, referring to the fact that a vast amount of what came to comprise both the Mahayana and Vajrayana traditions of Tibetan Buddhism came from the late 9th–12th century teachers and traditions at Nalanda, the great Buddhist monastic university in India.

One Tibetan scholar and translator expressed delight with His Holiness’s morning talk saying, “It was the fullest-yet presentation by His Holiness on Tibetan Buddhism as the inheritors of the Nalanda tradition.”

His Holiness told the mainly Buddhist audience, “The proper way to preserve the Buddhadharma is not just ritual. It is to study.” He added, “It’s not about just chanting and doing the rituals… You have to reflect deeply again and again, over a long period of time, and you’ll see a real impact… The power of the practice is really tremendous.” 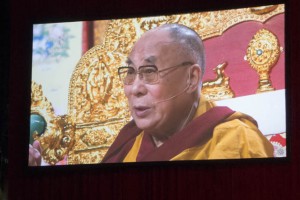 The Dalai Lama’s compassion was visible on the big screen.

Speaking of the “Eight Verses of Mind Training The Mind” by Geshe Langri Thangpa, His Holiness said that it was, “A beautiful text to use for one’s practice, short enough to memorize and when you find time you can reflect on some of the lines, and you can really see the effect.”

He joked that if you have a 30-minute delay at the airport or if you have insomnia, you can recite the teaching, think about it, relax, and have less stress.

The afternoon session began with an introduction of His Holiness by the renowned anthropologist, author and University of British Columbia professor, Wade Davis.

The Avalokiteshvara Empowerment is a set of rituals and teachings that a Buddhist teacher may use to help students cultivate compassion and calm abiding in their everyday lives. 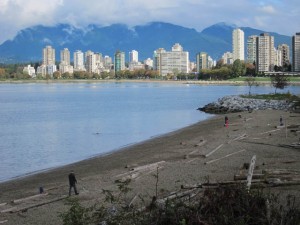 His Holiness has visited the city of Vancouver several times.

The empowerment has a continuous 2000-year history as a direct transmission of wisdom and compassion, passed from teacher to student. The Dalai Lama has presented this empowerment around the world to diverse audiences, but this was the first time that he had presented it in Vancouver.

His Holiness emphasized the universality of the teaching, which embodies the values of compassion and kindness that are widely found in the world’s spiritual traditions and philosophies.

Speaking often through his longtime translator, Thubten Jinpa, His Holiness carefully described the empowerment process, first leading the audience through the Bodhisattva vows. He gave specific practices for visualizing and cultivating compassion. 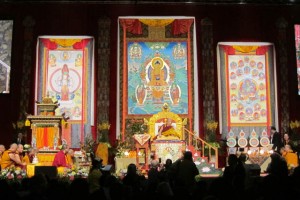 Organizers assembled a vast and traditional setting for His Holiness, on stage.

At the conclusion of the empowerment, Tibetan Cultural Society President Tenzin Gyurme thanked everyone, and announced that the funds raised by the event would be used to support the BC chapter of the Tibetan Resettlement Project.

The Tibetan Resettlement Project is an unprecedented humanitarian initiative by His Holiness to resettle up to 1,000 Tibetans in Canada from impoverished and remote refugee camps in Arunachal Pradesh, in northern India near the border of Tibet.

With the support of the Canadian government and local community groups, the displaced Tibetans will have the opportunity to be educated, employed and to begin a new life.

0
SHARES
Share
Posted Under: 2014, Dharma In Canada, Featured On Home Page, Winter
About the Author: Heather Wardle
Heather Wardle is a writer, editor and Buddhist practitioner from Vancouver, B.C. She works part-time doing fundraising and communications for the Tibetan Nuns Project. Many years ago she lived in Dharamsala and worked as senior reporter for the Tibetan Bulletin, an English-language news magazine published by the Central Tibetan Administration.