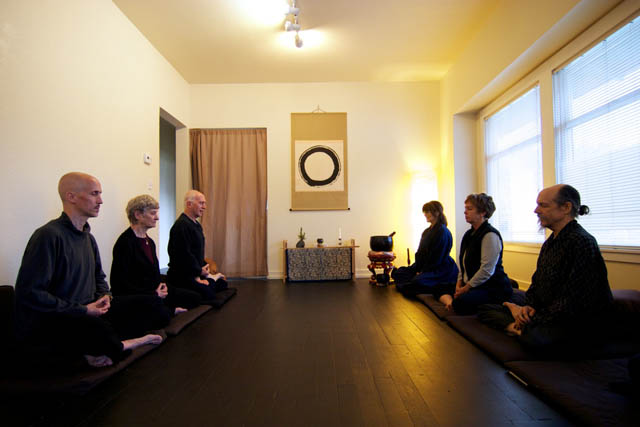 Just a year after signing a three-year lease for its new location in Seattle’s Fremont neighborhood, One Drop Zendo is preparing to expand its dharma offerings to the community.

The May opening of the new zendo, called Water Moon Dojo, ended a two-year search for an appropriate and affordable place in Seattle to practice zazen, or sitting meditation, in the Japanese Rinzai Zen tradition. Water Moon Dojo was also a realization of One Drop Zendo founder Shodo Harada Roshi’s vow, to make traditional Rinzai Zen practice available to a larger audience in the Seattle area. 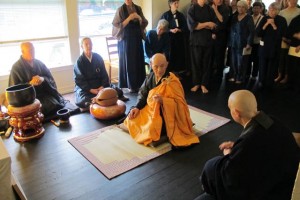 Harada Roshi, center, leads the opening ceremony of the zendo in May.

While the new center isn’t large, it is ample for an expansion of One Drop’s activities.

To start, Water Moon Dojo plans to expand the sitting schedule beyond the present schedule of Monday and Thursday evenings, and Tuesday mornings.

The new schedule will include extended all-day sits on some weekends. Center leaders also are planning more beginners’ classes, to provide basic instruction and background for people interested in the practice.

In December we observed Rohatsu, the traditional nine-day sitting that commemorates the Buddha’s enlightenment, with daily two-hour periods of zazen starting at 6 a.m. 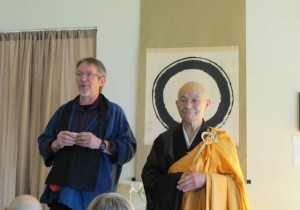 Ed Lorah introduces Harada Roshi, at the May opening ceremony.

In addition we now have scheduled quarterly gatherings for new and old sangha members, to socialize and share ideas. We hope to host some viewings of Zen-related films, with time for discussion afterwards.

We are also planning to continue sponsoring public talks on various aspects of Zen Buddhism and Zen practice, such as the series of lectures by Victor Sogen Hori at Seattle University last summer.

Harada Roshi will be offering public dharma talks in Seattle when he is here in February, May, and September, 2015.

Harada Roshi led the opening of the center, a small frame house, on May 15. Roshi dedicated the new dojo with this poem, which he had written.

The Great Prajna Paramita,
The pure contemplation of the emptiness
of both self and surroundings –
How could this allow any calamity or misfortune?
I sincerely pray
that the Water Moon Dojo
be naturally at peace. 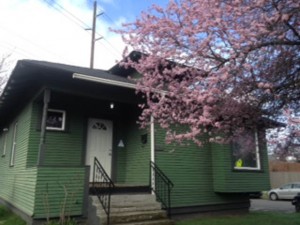 Cherry blossoms frame the zendo, shortly after it opened.

Shodo Harada Roshi has been a regular visitor to the Pacific Northwest for 25 years.

Harada Seicho was born in 1940 in Nara, Japan. As a young man Seicho was interested in becoming a psychologist. But a chance encounter on a Kyoto city bus with his future teacher, Yamada Mumon Roshi, changed his life:

“There he was, an old priest in robes, wearing glasses and reading a book, yet he glowed with a type of light,” Harada Roshi has written. “In comparison, the people around him seemed so weighed down by their thought and cares.” 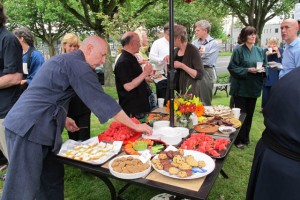 Shodo Harada trained with Mumon Roshi for 20 years. At one point, frustrated by his sense that he was making no progress in his training, he left Shofukuji and went to the mountains to practice, vowing not to return to the monastery until he had attained awakening.

There, one day, he met some hikers who said to him, “How fortunate you are to be able to practice all day, all week like this! We have to work in the world, so we only have this one day in which to come up onto the mountain and chant the Buddha’s name.”

Roshi later wrote of this meeting:

“It was like all of my burdens had dropped off, as if someone had hit me in the back and everything was awakened within. I realized right then the mistake I’d been making and immediately went back to the monastery. That day on the mountain I realized that there was no self to be bothered! I had been crushing myself and making myself miserable worrying about the problem of realizing enlightenment, when in fact it was found in the living of every single day! When I came back from the mountain I knew that what I had to do with my life was to live it totally with the purpose of bringing this crystal clear awareness to other people.”

The calligraphy, which reads “Sitting in the Water Moon Dojo,” is by Harada Roshi.

Harada Roshi completed his training with Mumon Roshi, and in 1983 was sent to Sogenji Temple in Okayama to establish a training monastery.

Harada Roshi never forgot his vow to bring awakening to others, and he made Sogenji a place that, unlike most Japanese monasteries, trains Westerners and women and men together.

Harada Roshi saw that the West had great interest in and enthusiasm for Buddhist practice, and in the late 1980s he began his frequent visits to the Pacific Northwest.

Roshi has always spoken of the importance of service to others as a part of Zen training, and early in his travels to Seattle he met a number of people working in hospice care. His concern for the dying, as well as for the caregivers who care for them, led to the creation of a caregiver support group at Tahoma Monastery on south Whidbey Island. In 2001 the group established Enso House, a licensed adult family home dedicated to caring for people at the end of life, which adjoins the monastery.

0
SHARES
Share
Posted Under: 2014, Dharma Education, Winter
About the Author: Ed Lorah
Ed Lorah is a social worker in Seattle who has worked extensively in hospice and HIV/AIDS care. He is a founding member of Enso House, and has been a student of Shodo Harada Roshi since 1993.