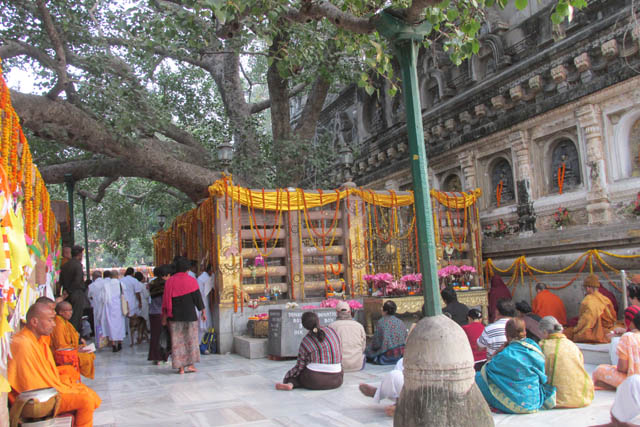 Pilgrims from around the world gather around the bohi tree at Bodh Gaya, which marks the place where the Buddha awakened.
Photos by: Steve Wilhelm

As someone practicing the dharma in the West, I’ve long wanted a better sense of who the Buddha was, and how people practice his teachings in predominantly Buddhist circumstances.

This November and December I had a chance to do both on a month-long solo pilgrimage to India and Myanmar. In India I stayed for several days at two Tibetan nunneries, supported by Seattle-based Tibetan Nuns Project. I then traveled to, and practiced at, four of the key sites of the Buddha’s life. 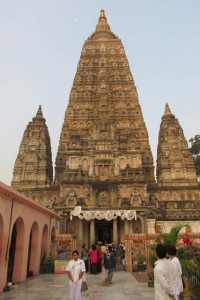 A constantly changing river of pilgrims meditate, circumambulate and pray at the Mahabodhi Stupa, the focal point of pilgrimage to Bodh Gaya.

In Myanmar I lived and practiced at a monastery in Sagaing, a region known for its many monastics, and monasteries, nunneries and stupas.

My hope was that I’d bring something back from the journey that would support my own efforts on the path here in Seattle, and my intent to benefit others. I tried to approach the journey as a retreat in motion, and as much as possible tried to find ways to practice wherever I was.

Many thanks to the many people who supported me, including my co-workers at Puget Sound Business Journal, and especially my wife Ellen Wilhelm.

While I was able to arrange some aspects of the trip before I left, much of it I had to figure out on the road. In India I opted to hire a car and driver to get between some of the key sites of the Buddha’s life, because several are in isolated parts of Uttar Pradesh, and in case of Sravasti, is far from the railroad station.

It is in Bodh Gaya that the Buddha sat under a pipal tree and meditated all night, facing and finding freedom from all his attachments, emerging that morning as the awakened Buddha.

Bodh Gaya is the primary crossroads of Buddhist world, where pilgrims from over Asia, and the West, gather to honor and absorb the Buddha and his teachings. 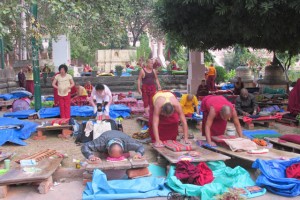 I’d last been there in 1991, and the changes are enormous…the tiny quiet village has become a busy small city thronged with pilgrim buses and restaurants. Getting access to the Mahabodhi stupa requires clearing heavy security checkpoints with metal detectors, a screening that was instituted after a 2013 terrorist attack at the temple injured five.

Despite the security, or perhaps because of it, the gatherings of people at the temple were relaxed and reverent, during the five days I was there.

Pilgrims started entering the temple complex at 5:30 a.m., and all day until long after dark people were meditating, doing prostrations, chanting…whatever their tradition suggested. At times the temple was loud, with loudspeaker-equipped teachers leading groups of pilgrims at several sites at once, other times it became quiet, almost empty. 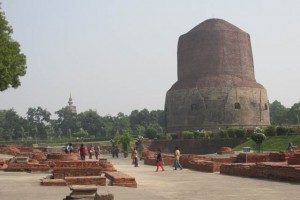 The great stupa at Sarnath, where the Buddha first taught after his awakening.

After the Buddha awakened at Bodh Gaya, he walked to Sarnath, about 250 kilometers away. It’s here that he first started teaching.

Today Sarnath is a beautiful park, a vast expanse of lawn, the ruins of former monasteries, and the great Dharmek Stupa. There are even deer, behind a fence, because this was once called deer park.

With more space pilgrim groups get a chance to settle down, often with their teachers, and meditate or hear teachings. This means there are lots of little groups, from many Asian countries, led by monks or teachers speaking through small amplifiers. It might sound chaotic but it works, and felt very harmonious. 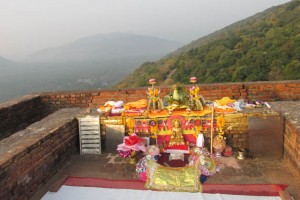 From this cliff high on Vulture Peak, the Buddha delivered the famous Heart Sutra, an exposition on emptiness.

One of the most moving sites for me was what’s left of the Dharmarajika Stupa, now just a circular foundation.

It seems likely that this stupa marked the site of the Buddha’s first teaching, of the four noble truths, but sadly in 1794 the Maharaja Jagat Singhe had it torn down for materials to build a nearby market. When they found a casket inside filled with ashes, likely those of the Buddha, they threw those ashes in the Ganges.

The Dharmek Stupa, the tall one still standing, may be the site of the Buddha’s second teaching. In the evening it’s beautiful, as pilgrims from many countries circumambulate.

Just about 60 miles away is Vulture’s Peak, where the Buddha delivered the Heart Sutra, his famous teaching on emptiness. 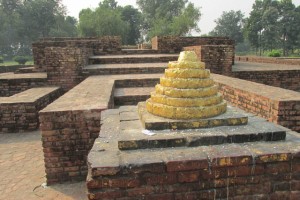 Sravasti is where the Buddha lived for 24 rains retreats and gave most of his most famous talks. These ruins mark where his hut once was.

This region was filled with surprises for me. For starters, I never quite internalized what it means that the Heart Sutra was supposedly delivered to a vast company of Bodhisattvas at Vulture’s Peak. I mean, the mountain drops off steeply from where the Buddha and Avalokitesvara were, it’s a steep climb up, and there’s not much room for any physical gathering at the top. Perhaps they really were floating in space…it was expanding to contemplate the possibility.

If you travel there from Bodh Gaya, leave early. I left by taxi at 5 a.m., which meant that I was able to get there before the disgorging of the first pilgrim bus, so I was able to recite the Heart Sutra there in relative solitude, before anyone arrived.

This area, about two hours from Bodh Gaya, also includes a number of important sites. Right below the place where the Heart Sutra was delivered is the Boar’s Cave, supposedly where the Buddha’s chief disciple Shariputra was enlightened. Just a few miles away are the Bamboo Grove and Mango Grove, two places where the Buddha lived and practiced, and where he delivered famous sermons. 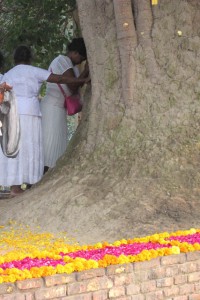 Pilgrims from around Asia gather to visit Sravasti, and to bow to the Bodhi Tree there.

And then there’s the prison where King Bimbisara, who had supported the Buddha, was imprisoned until death by his own son. It struck me that sometimes we might think that if only we could have been around at the time of the Buddha, that would have made our troubles go away. But thinking of Bimbisara showed me how much the practice really is about attitude, because Bimbisara ended up dying in jail, and the Buddha was still alive then, and at times right next door.

Next was Sravasti, the place that most connected me with the Buddha, where I could feel who he was during his teaching years.

It’s not one of the four key pilgrimage sites, and it’s 185 miles north of Sarnath, in Uttar Pradesh, in a very difficult and impoverished region far from even a railroad station. Getting there took a 12-hour drive, over some of the roughest roads I’ve even been on.

But it’s here the Buddha spent 24 rains retreats, and here that most of his great teachings were given. Anytime a sutta starts with “at Savatthi in Jeta’s grove,” the Buddha gave it at Sravasti. (Thanks to Dhammadinna, at BodhiHeart Sangha in Seattle, for suggesting I go here.) 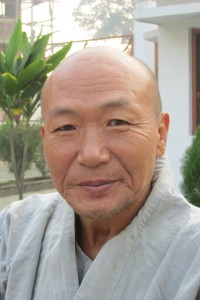 The abbot of the Korean monastery at Sravasti, a fine place for pilgrims to stay.

Only a few Asian pilgrim groups come to Sravasti, and fewer Westerners. You can settle in and practice for hours, taking in the fact that the Buddha walked where you’re sitting, that he spoke to people and urged them to awakening, just there. Drink it in. Here the Buddha lived and taught for decades.

It’s beautiful, with wide lawns and many ruins of monasteries. At the center are two places the Buddha lived, the Gandhakuti, or fragrant hut, with a tiny gold-leaf covered stupa in front. Nearby is the Kosambakuti, where he also at times lived, with a raised rectangular brick structure indicating the spot where he is said to have done his walking meditation.

And yes there is a large Bodhi tree, said to be a descendent of the original one at Bodh Gaya, and a focal point for many pilgrims.

The brick ruins mark generations of temples built on those spots, but there is significant archeological evidence that these are the right places.

(Here’s a tip…if you visit, stay at the Korean monastery. They were very generous, offered room and food on a donation basis. The abbot was wonderful, the food was great, and the rooms and everything were clean.) 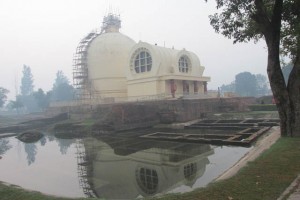 Kushinagar, where the Buddha died, is especially moving.

Kushinagar, where the Buddha died, hit me deeply in the heart.

There’s something so elemental here, with everyone focused on the 20-foot statue of the reclining Buddha, his golden face serene, radiant, with a hint of a smile, at the end of his life.

The 5th-century statue is inside a crypt lined with polished stone, surrounded by green lawns and the ruins of the monasteries that once were here.

Starting at dawn groups of pilgrims pour through the building, many of them bringing beautiful shrouds to lay upon the statue. Some of the shrouds are gold, some maroon, some silver…maybe the pilgrims worked on these shrouds for months.

Pilgrims come to venerate the 15-foot statue of the reclining Buddha, and to drape it with beautiful shawls.

In graceful unity the groups would pull their shrouds over the statue leaving only head and feet exposed, pray for a time, and then melt away. Then another group would come, with another shroud. There was an aura of solemn devotion around the statue, almost as if people were still revering the Buddha’s presence, sad at his passing.

I found that by backing into one of the inside corners of the crypt, sitting on the meditation cushion, I was enough out of the way so that people didn’t actually step on me, even when hundreds were crowded into the building. Hours went by, and the sense of presence was palpable. There was nowhere else to be.

I don’t pretend to understand, but Kushinagar seemed more about presence than ending.

In general I felt this pilgrimage brought me closer to a sense of who the Buddha was, which resonates in my heart now, when I practice and when I read the suttas.

0
SHARES
Share
Posted Under: 2014, Dharma Education, Winter
About the Author: Steve Wilhelm
Steve Wilhelm is editor of Northwest Dharma News, and a former board president of Northwest Dharma Association. He primarily practices with Seattle Insight Meditation Society and is a Local Dharma Leader there, and also contributes as a board member of Tibetan Nuns Project.