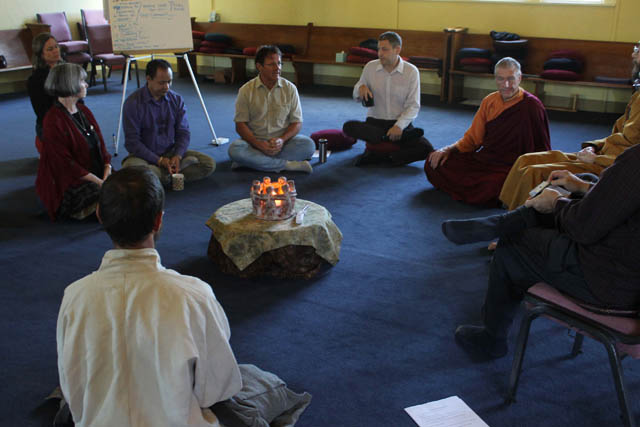 Teachers from around Portland sat together and discussed many subjects, including supporting Mahasangha.
Photo by: Korokaisan Miles

Eight teachers from Portland area gathered on Oct. 4 at the Portland Insight Meditation Community, for a localized version of the annual teachers’ meeting.

A similar meeting was underway at the same time at the Choeizan Enkyoji Nichiren Buddhist Temple in Seattle, where 15 were gathered.

Many thanks to Portland Insight Meditation Society for graciously allowing us to hold our meeting in their beautiful space, and thanks also to our host Jim Dalton.

Sitting down in the morning, Fa Hsing Jeff Miles directed the meeting, beginning with a remembrance of Kyogen Carlson of Dharma Rain Zen Center, who died in September. People from around the circle spoke about Carlson’s life, his dharma work and his effect upon their own lives.

Koro Kaisan Miles then gave a short talk recapping NWDA activities in the past year. He spoke about the importance of creating the culture of and nurturing Mahsangha, the community of Buddhist sanghas.

Other officers contributed from their perspective and talked about the financial support needed to fund the activities of the NWDA, especially with regard to the ‘Mahasangha Mala’ initiative, where we are asking 108 individuals to pledge $108 dollars per year.

We then went around the circle with introductions, each person talking about their sangha, offering their perspective on past year’s events and what they hoped to address during the meeting. We took note of the topics on the flip chart as we went around the room.

After taking a short tea break and sharing wonderful side conversations, we reconvened to rank the topics to generate an agenda for the rest of the day. We were able to group topics into three broad themes: community, outreach and teacher issues.

Before lunch we discussed community. We tried to frame community activities in terms of Mahasangha, that is, when we host events in our own sanghas, making an effort to invite sanghas from other traditions. These can be small, topical events throughout the year, and do not have to be large, once- a-year productions.

Several teachers gave examples of events that would lend themselves to this perspective. In terms of larger initiatives, we mentioned this very meeting, and the recent Arts as Buddhist Practice gathering, as examples of Mahasangha community building.

Of particular note we talked about Kyogen Carlson’s vision for the Householder Refuge, a Buddhist cohousing community 15 miles out of Portland, as a very specific, concrete way of creating a full-time Buddhist lifestyle in community.

After lunch, we discussed various outreach topics including how we reach a more diverse population. Examples of existing sanghas that explicitly call out to diversity were mentioned: Dharma Punx and Dharma Rain. Making sure that there are explicitly free events was mentioned by several as a way to encourage economic diversity. Using ‘Meet Up’ and hosting flash mob sits were talked about as ways of reaching a younger population. Engaging our sanghas in community service projects is a natural outreach. Several teachers talked about the difference between appearing in public in monastic garb as opposed to regular clothes, as making a difference in initiating conversation, again a natural outreach.

We took our midafternoon break and Jim Dalton led us in a round of Shibashi, a series of Qi Gong movements. Thanks Jim!

Our last discussion centered on teacher’s issues. While much of the discussion will remain private, a few interesting topics can be mentioned:

One last individual appreciation: Thanks to Valerie Griggs Devis for taking extensive and clear notes of the meeting!

We concluded the meeting in the late afternoon, bidding each other well, looking forward to the next time we meet.

Thanks to all the teachers who attended, making this a rewarding session. And to the Portland area teachers who were otherwise occupied with their responsibilities, we missed you. Hope you can attend next year!

0
SHARES
Share
Posted Under: 2014, NWDA News, Winter
About the Author: Tim Tapping
Tim Tapping practices with Sakya Monastery of Tibetan Buddhism in Seattle, and is president of Northwest Dharma Association. He works as a software engineer at Expedia travel in Bellevue, Washington, and leads a meditation group there. He lives in Sammamish, Washington, with his wife and daughter. His son is a chef in Long Beach, Washington.