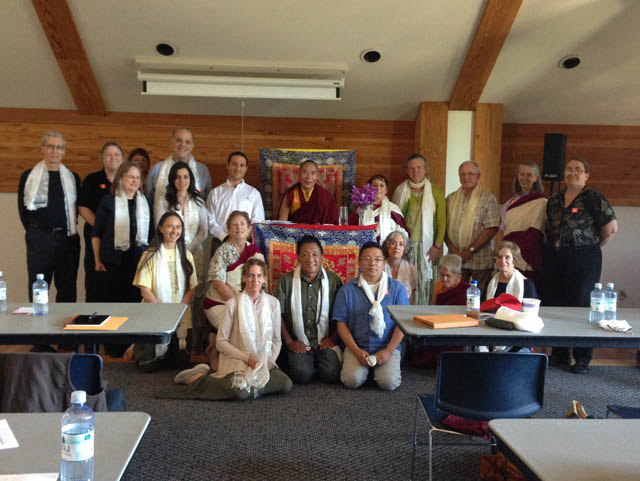 Seasoned Tibetan teacher Chamtrul Rinpoche visited Portland in August, to offer teachings on the classic text, “Words of My Perfect Teacher” by Patrul Rinpoche, and “The Heart Essence Lineage” of the Longchen Nyingthg. 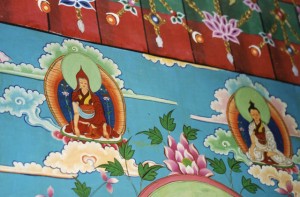 Throughout the weekend at the World Forestry Center in Portland’s Washington Park, Rinpoche was able to respond to questions in an individual manner and address the needs of each student.

Receiving the essence of this text from a realized teacher such as Chamtrul Rinpoche provides understanding that goes beyond mere words into direct experience. This weekend was another important step in establishing this Tibetan lineage in the Pacific Northwest.

Some who attended his evening lecture “Heart Essence Lineage,” in downtown Portland at First Congregational Church, had never heard the telling of the full lineage of the Longchen Nyingthig. This lineage is popular in Tibet and is taught at many monasteries of different traditions. Now the lineage is being practiced in a number of locations in the Pacific Northwest, such as Samden Ling. 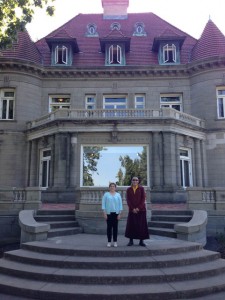 Chamtrul Rinpoche and Jacqueline Mandell in front of Pittock Mansion, a Portland museum.

Chamtrul Rinpoche speaks good English. At some points during the weekend teachings he repeated memorized Tibetan texts to himself, and then translated them for the students. His full focus and discipline were palpable.

Chamtrul Rinpoche first visited Portland a year ago, invited by the Northwest Tibetan Cultural Association. At that time Rinpoche gave teachings and the ‘lung’ (permission) transmission for the Longchen Nyingthig Ngondro practice.

During his lecture Chamtrul Rinpoche spoke about such masters as Longchen Rabjam, who lived from 1308 to 1363, and who was one of the greatest scholars and realized sages of Tibet.

Rinpoche also spoke of Jigme Lingpa, who lived from 1730 to 1798, and who discovered the revelation of the Longchen Nyingthig cycle of teachings as a mind treasure.

Chamtrul Rinpoche lives in McLeod Ganj, India, where he teaches at the Bodhichitta Dharma Center, and travels worldwide to offer teachings. 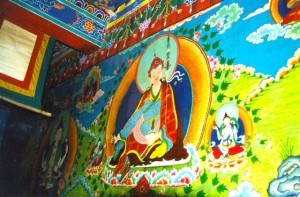 Wall Painting of Padmasambhava, the founder of Tibetan Buddhism, at Tsogyel Latso Temple in Tibet.

Chamtrul Rinpoche received his Khenpo degree in Tibet from the renowned Khenpo Jigme Phuntsok (1933–2004), a master of The Great Completeness, a tradition also called Dzogchen.

Chamtrul Rinpoche illuminated the instructions of the Longchen Nyingthig Ngondro, the foundational practices. He gave spiritual guidance and transmitted Buddhist teachings on multiple levels. His offering to the community has helped yogis become more familiar with Longchen Nyinghtig lineage.

People from different sanghas offered most of Rinpoche’s meals. One of the Tibetans made him Amdo bread, which he really liked. On the last night of the retreat many gathered at Jin Wah, a Chinese restaurant in Beaverton, for a concluding dinner.

On Rinpoche’s final afternoon, he had a few hours to go sightseeing at the Pittock Mansion and eat pizza at a local pizzeria!

Portland and Samden Ling were honored to have Chamtrul Rinpoche here to teach in-depth dharma.

0
SHARES
Share
Posted Under: 2014, Dharma Education, Winter
About the Author: Jacqueline Mandell
Jacqueline Mandell is a founding teacher of Samden Ling, with a long history in Tibetan Buddhism. She also is a former board member of Northwest Dharma Association.