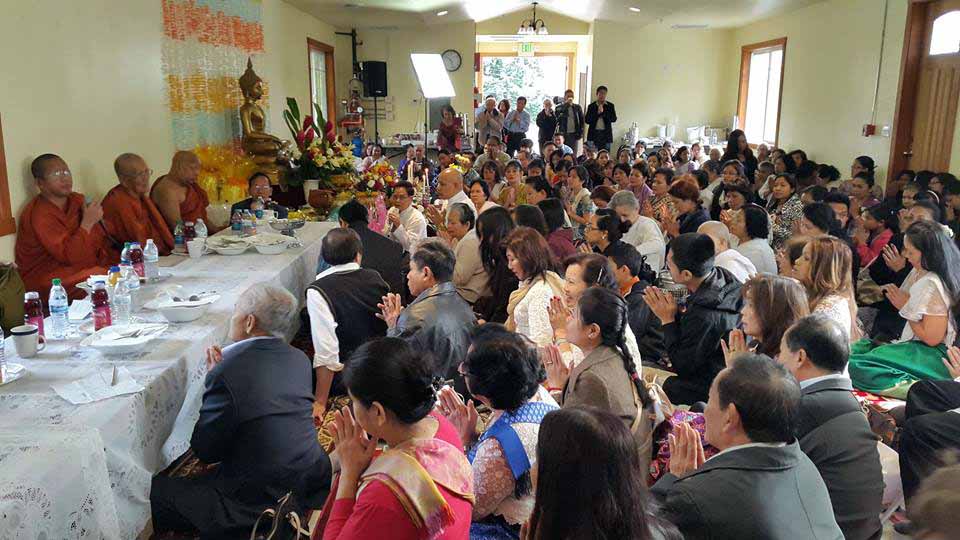 The Cambodian Katina celebration, traditionally a robe offering ceremony at the end of the rains retreat, in the newly opened hall in 2014.
Photos by: Tom Youngjohn

After a year of construction, Sarana International Buddhist Center has opened a new and larger meditation hall to support the Seattle region’s Cambodian, Sri Lankan, and other Buddhist communities. 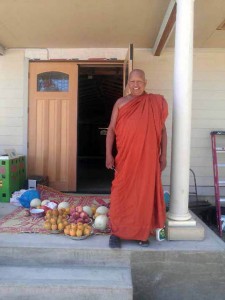 The Cambodian Katina celebration, traditionally a robe offering ceremony at the end of the rains retreat, in the newly opened hall in 2014.

Before completion of the 1,700-square-foot meditation hall, or sala, Sarana International Buddhist Center was simply a residential home with a converted stand-alone garage operating as the “sala.” This word traditionally refers to a covered area where people can hear Buddhist teachings.

While the previous sala is still available for the use of meditation groups of 30 or less, (as well as for cultural and religious practice groups), the newly constructed sala holds 216 people comfortably. The new meditation hall includes two bathrooms, is heated and air conditioned, and has working fire sprinklers in the ceiling.

Sarana International Buddhist Center is located in the city of Tukwila, south of Seattle. With the new hall it can finally accommodate the crowds of people who used to overflow the previous space before construction of the new sala. But now the number of interested people continues to grow, so that even with the new sala, there are still overflow crowds on occasion.

The temple serves people with Buddhist services, dhamma talks, funeral services, wedding services, house-blessing visits, and a dhamma school. Even during the recession, when donations were down, the number of people coming to the Tukwila Sangha increased. More than 500 people attend some events. 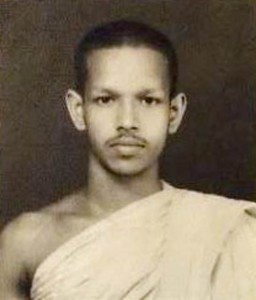 A 20-year-old Pangnananda, after receiving his higher ordination in 1974.

Certain parking improvements remain to be built, which will complete development of the new meditation hall.

Depending on whom one asks, Sarana International Buddhist Center’s new sala is either simply the consequence of having supportive neighbors and the goodwill of the City of Tukwila, or, (when asking anyone other than Sarana’s abbot), the consequence of careful planning on the part of the  wise yet humble spirit of Master Polwatte Pangnananda, the abbot of this rapidly growing Buddhist temple complex.

As Sarana’s abbot and head monk, Master Polwatte Pangnananda prefers not to take credit for the center’s popularity, but the man certainly has his hands full. In addition to his leadership of Sarana, he also directs a larger Buddhist temple in Sri Lanka, ‘Siri Dava Raki Tha Ramaya,’ where Pangnananda guides and manages with wisdom and insight gained from a lifetime of service. 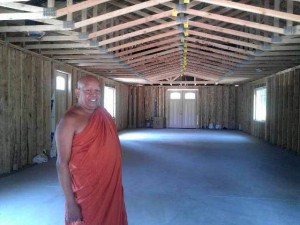 Pangnananda, during construction of the new hall.

Pangnananda first put on the monk’s robes in 1965, at the tender age of 11, at Namaloya Kadurugoda Buddhist monastery in Ampara, Sri Lanka. He received his higher ordination in 1974, and studied the dhamma at Dharmaduta Buddhist Center in Colombo, and the University of Kelaniya.

The cost of this new addition, including construction, the architects, Tukwila permits, a construction engineer, and expansion of the parking facility, were more than $230,000.

Said  Pangnananda, smiling:  “This could have been a strain on the resources of a monk who has taken a vow of poverty, but we have a promise of funding, and honestly the gift of the dhamma is priceless.”

In a story Northwest Dharma News ran on the project when it first started, Pangnananda spoke of his motivation: 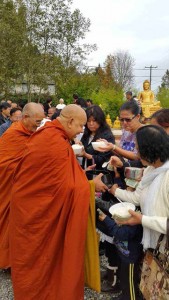 Lay people offer food to monastics in a traditional ceremony.

“My main purpose is peace, happiness, harmony, and prosperity,” he said. “It is kindness and compassion we’re going to teach to people.”

The three monks at Sarana, like all Theravada Buddhist monks, live at the monastery and must follow the monastic rules of the Theravada tradition, at least within reason.

“But we do have a refrigerator,” said Pangnananda , with a smile.

These commitments bring inner freedom for Pangnananda and other monks, and are celebrated by the lay community.

But for other monks the commitment is difficult, and sometimes they disrobe. 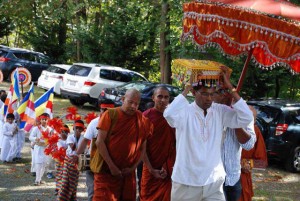 “The United State has been blessed with so much wealth and so much freedom that the temptations, and often family pressure from overseas to earn money and provide support, are simply overwhelming,” Pangnananda said. “In Theravada Buddhism, there is no reproach to monks who leave the monastic life… I am trying to be extra careful to try to select monks who are dedicated to sharing the dhamma, which Americans have a growing desire to study and practice.”

He adds that the new meditation hall has improved the circumstance for the monastics there.

“The laity, through their donations, provide for the monks’ food and shelter and medical needs,” he said. “Our monks live in the monastery, at the center itself. Food is provided for. Medical needs are provided for. The monks tend to the spiritual needs of the congregation, the lay members. And now, with the new sala, our sangha has room to expand.”

3
SHARES
Share
Posted Under: 2014, Sangha News, Winter
About the Author: Tom Youngjohn
Tom Youngjohn, Sarana's immigration attorney since 2007, is now in charge of the growing English language meditation group meeting every Wednesday at 6:30PM in Sarana's original sala. Find them under 'SIBC Meditation Group' on MeetUp.com