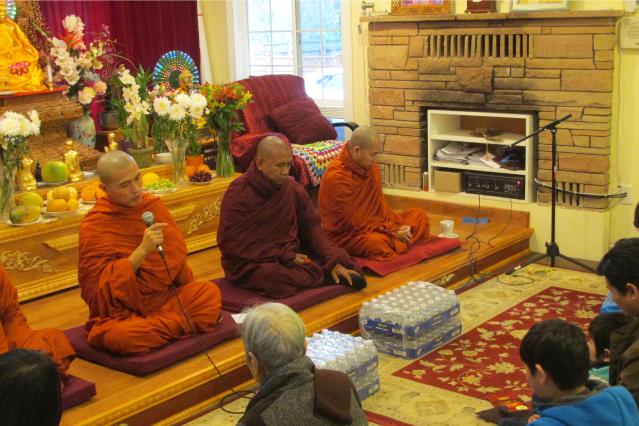 Four monks, three of them visiting the area, offer teachings to Burmese people on a recent weekend.
Photos: Steve Wilhelm

A community of Burmese Buddhist practitioners, far from their homeland of Myanmar, is gradually working toward their dream of a fully functioning authentic Burmese monastery. 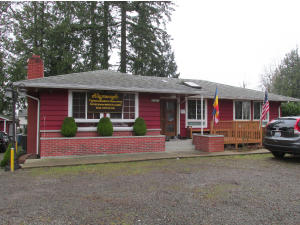 The building, at one time a home, is set back from a busy Kent traffic artery.

For now they’re making do with a former split-level home east of Kent, a small city south of Seattle, as an impromptu temple and community hall.

While the current setting may not be ideal, that didn’t doesn’t keep the place from acting as a magnet for people from the Burmese community.

During a visit in early January the place was bustling. Upstairs in the shrine room, four monks were seated together on the floor, one offering teachings to a small but rapt audience. Downstairs, volunteers were preparing a community meal, while laughing children ran about underfoot. 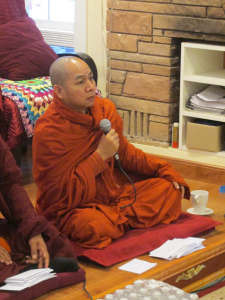 Sayadaw Nandathaya, from Myanmar, is the abbot of the temple.

The current building, which the group owns, sits on the front portion of the approximately one-acre site. While it fronts on a busy Kent traffic artery, the monastery itself seems quiet and protected.

Already the monastery is offering a full range of traditional programs, said Than Than Htwe, a member of the nine-person board of directors.

The Jan. 3 event was a traditional celebration of the new year, and featured teachings from resident monk  Sayadaw Nandathaya, and three visiting monks. The four were lined up in front of the golden shrine room altar, with Nandathaya offering the dhamma in a vigorous voice. 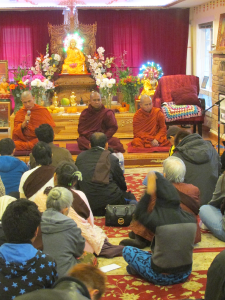 The temple attracts Burmese people from around the region.

For another traditional festival, planned for beginning of February, temple members made sticky rice, one of the dishes often offered in Myanmar.

The temple celebrated a very large event in 2013, a traditional temporary ordination of about 24 people, one of them female, which attracted nearly 500 family and supporters, said Htwe.

“In Burma they want their sons to be temporary monks,” she said.

Once a year the monastery supports a five or seven-day retreat for lay members.

To pay off the mortgage for the current house, and then save up money for its replacement, the Tipitaka Monastery sangha is using a unique system of donating by “blocks.” 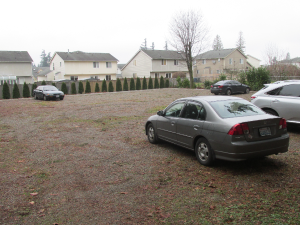 Behind the building, space where the temple supporters could construct a larger and better-suited building.

Each block is a $500 donation, and the monastery is seeking 1,000 of these. So far funds for about one quarter of the blocks have been donated, and the website displays the numbered blocks, and the name of each donor or donor family.

“People can donate at once, or through a monthly installment plan,” she said, adding that the sangha currently has 22 of the latter.

At the current rate the sangha will pay off the temporary temple in about five years, and then will be able to decide if they want to build a new temple on the existing land, or find an unused space to move into.

“Building a new building is not easy here,” she said. “If we could find somewhere suitable, maybe we will buy instead of building a new one.”