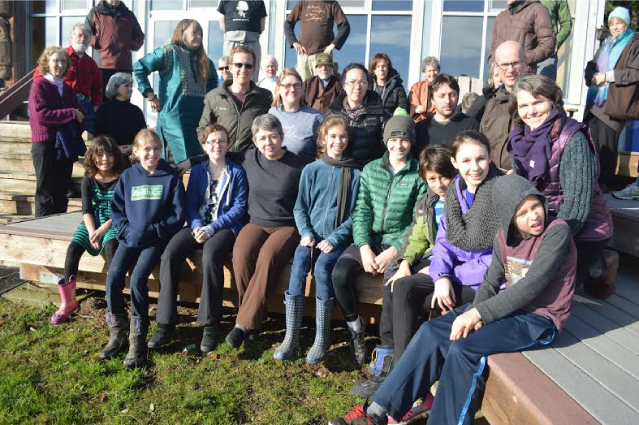 In January the extended sangha of the Mindfulness Community of Puget Sound gathered for a retreat led by teacher Michael Ciborski, and enlivened by the presence of many children.

The mindfulness retreat, over the Martin Luther King weekend, was in the in the tradition of Vietnamese Zen Master Thich Nhat Hanh. 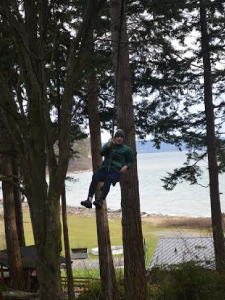 Climbing trees was part of the practice.

Our retreat was enriched by the presence of families during the long weekend, with the children ranging in age from 3 to 15.

This is a testimonial from one of the parents:

“This year the teenagers who have been participating in the retreat for many years, welcomed several new families and younger children. It was so lovely to have this new energy! Our amazing children’s program coordinator, Hilery, gave the parents a gift by organizing activities and assigning sangha member volunteers to practice with the kids. This was the first time in six years that I was able to practice fully with the adults while I knew my son was being held by the love of the sangha.” 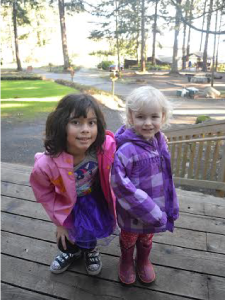 The retreat had plenty of space for children.

These experiences were very much enhanced by the beauty of Camp Indianola, with trails through old and second-growth forest, beach access to the Salish Sea, and spectacular Seattle skyline and Mount Rainier views. Camp Indianola is located at the edge of the town of Indianola, 10 miles north of Poulsbo on the Kitsap Peninsula.

Our teacher for the retreat was Michael Ciborski. He is a lineage-holding dharma teacher in the Buddhist tradition of Venerable Thich Nhat Hanh.

He replaced Eileen Kiera, who was the dharma teacher at the Indianola retreat and at MCPS for many years, and who also is a lineage holder in the tradition of Thich Nhat Hanh. She has retired from her leadership of MCPS, and continues to teach at Mountain Lamp Community, near Deming, Washington.

Ciborski lived as a monk for seven years in Plum Village, France, and has worked intimately with Thich Nhat Hanh and the monastic community to organize, support and offer meditation retreats around the world. 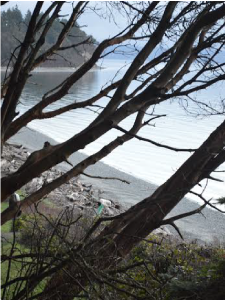 Nature and the sea formed the backdrop.

After leaving the monastery in 2003, Ciborski returned to the U.S., and with his wife Fern Dorresteyn, has helped to establish an intentional spiritual community and mindfulness center known as MorningSun, in southern New Hampshire.

As a group, we found Ciborski’s teaching and presence engaged, open and authentic.  So much so, that we are inviting him to teach again at Indianola in 2016.

The theme from his teaching was often about being available to our loved ones, friends and ourselves. Furthermore, he taught that we can trust our practices that invite us to embrace, and come back, to our difficult emotions. In this way we can be led to a deep commitment to understand our own and others’ needs, and to even acknowledge being at a loss about what to do.

His repeated message: be willing to “unilaterally disarm” (our piece of a conflict), “practice humility” and “own our discomfort.” 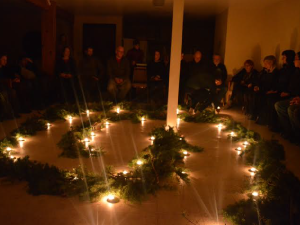 A ceremony during the retreat.

The Mindfulness Community of Puget Sound (MCPS)  is a peer-led sangha that practices meditation and mindfulness as taught and inspired by Thich Nhat Hanh. He has predicted that the next living Buddha will be the sangha (or spiritual community).

Our practice reflects a special emphasis on community-building. We welcome people of all backgrounds to practice with us.

The next mindfulness retreat at Indianola will be held in April, 2016 (exact dates to be announced later this year).